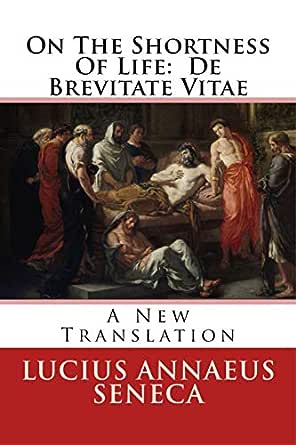 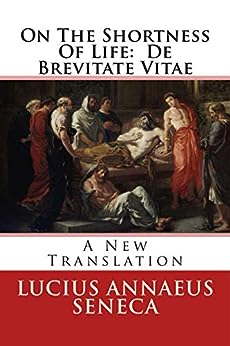 On the Shortness of Life: De Brevitate Vitae (A New Translation) (Stoics In Their Own Words Book 4) (English Edition) Kindle-editie

Life is long if you know how to use it.

From the author of Letters From A Stoic (Epistulae Moralis), comes another brilliant, timeless guide to living well.

Written as a moral essay to his friend Paulinus, Seneca’s biting words still pack a powerful punch two thousand years later. With its brash rejection of materialism, conventional lifestyles and group-think, On The Shortness of Life is as relevant as ever. Seneca anticipates the modern world. It’s a unique expose of how people get caught up in the rat race and how for those stuck in this mindset, enough is never enough. The ‘busy’ individuals of Rome Seneca makes reference to, those people who are too preoccupied with their careers and maintaining social relationships to fully examine the quality of their lives, sound a lot like ourselves.

The message is simple: Life is long if you live it wisely. Don’t waste time worrying about how you look. Don’t be lazy. Don’t over indulge in entertainment and vice. Everything in moderation.

Seneca defends Nature and attacks the lazy. Materialism and a love of trivial knowledge are exposed as key time wasters, along with excess ambition, networking and worrying too much. In this new non-verbatim translation by Damian Stevenson, Seneca’s essay comes alive for the modern reader. Seneca’s formality of language has been preserved but the wording is more attuned to a contemporary ear. This is a rare treat for students of Stoicism and for anyone interested in seeking an answer to the eternal question, “How should I best use my time?”

Seneca wrote his 20-sections On the Shortness of Life in 49 CE, the year he returned to Rome from his exile in Corsica, as a moral essay addressed to his friend Paulinus.
click to open popover

B Nelson
5,0 van 5 sterren Wisdom and vision.
19 maart 2015
Indeling: Kindle-editie
I’m happy to see another release in the Stoics series. This volume, On The Shortness Of Life: De Brevitate Vitae (A New Translation with Image Gallery and Seneca Biography) (Stoics In Their Own Words Book 4), is another powerful work. Seneca’s writing is full of wisdom and vision. I read these ancient words and am inspired. It is absolutely incredible that these essays were not lost to time and they are now able to be easily discovered by so many new readers. A gift of great knowledge. Everyone should read this stuff. Five stars.
Meer lezen
Nuttig
Commentaar geven Misbruik melden
Vertaal recensie in het Nederlands
Alle 1 klantenrecensies bekijken
Klantenrecensie schrijven

Kindle Customer
3,0 van 5 sterren Questionable translation
3 maart 2016 - Gepubliceerd op Amazon.com
Indeling: Kindle-editieGeverifieerde aankoop
I did not like this "new" translation. I really doubt that Seneca used the terms "macho" and "reboot" (among others.) Perhaps this translator was trying to update Seneca's ideas for modern sensibilities. But Seneca's writings have been around for 2,000 years, and I would have preferred a translation honoring that ancient wisdom which still matters today, rather than the translator's off-putting attempts at being clever and trendy.
Meer lezen
34 mensen vonden dit nuttig
Vertaal recensie in het Nederlands

Kyle Lawrence Sherrer
5,0 van 5 sterren One of the best books I have ever read hands down.
6 december 2016 - Gepubliceerd op Amazon.com
Indeling: Kindle-editieGeverifieerde aankoop
A fantastic book that points out how important time management is in the world we live in. This book is a classic that should be in every school and be mandatory reading before high school.

The book explains how time is the moist precious resource we have it is something that we cannot buy but rather something we all have a finite amount of no matter how wealth or poor we are. It is the thing we should be the most frugal with yet the thing we often waste the most of.

Sue Sundram
1,0 van 5 sterren please do not buy THIS Publishers book. waste of money.
23 december 2019 - Gepubliceerd op Amazon.com
Geverifieerde aankoop
On shortness of life is a great book by SENECA. But thi8s edition is cheaply produced. It has numbers for cross referencing and explanation. But when you turn over to the glossary for referencing.....THERE IS NOT GLOSSARY.
spend more money, buy a better publishers. I bought a second one from Penguin and am happy with it.

Indy
5,0 van 5 sterren Buy 3 minimum and give them to young people you care about.
17 mei 2019 - Gepubliceerd op Amazon.com
Geverifieerde aankoop
I gave this to my 23 year old and he was so moved by it he bought several more and gave them to his friends. This is a MUST READ. Read it in one day. Worth every minute.
Meer lezen
Een iemand vond dit nuttig
Vertaal recensie in het Nederlands

Dennis J. Hosier
5,0 van 5 sterren If only we could live life this way
16 november 2019 - Gepubliceerd op Amazon.com
Geverifieerde aankoop
Though a thousand years or more have passed since this was written is still profound and well worth the read. The nature of man has changed very little only the technology that surrounds him.
Meer lezen
Vertaal recensie in het Nederlands
Ga naar Amazon.com om alle 57 recensies te bekijken 4,3 van 5 sterren
Terug naar boven
Over ons
Verkoop bij ons
We helpen je graag
© 1996-2020, Amazon.com, Inc. en dochterondernemingen