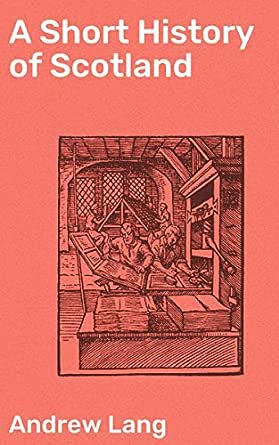 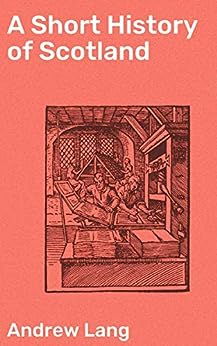 "A Short History of Scotland" by Andrew Lang. Published by Good Press. Good Press publishes a wide range of titles that encompasses every genre. From well-known classics & literary fiction and non-fiction to forgotten−or yet undiscovered gems−of world literature, we issue the books that need to be read. Each Good Press edition has been meticulously edited and formatted to boost readability for all e-readers and devices. Our goal is to produce eBooks that are user-friendly and accessible to everyone in a high-quality digital format.

If we could see in a magic mirror the country now called Scotland as it was when the Romans under Agricola (81 A.D.) crossed the Border, we should recognise little but the familiar hills and mountains. The rivers, in the plains, overflowed their present banks; dense forests of oak and pine, haunted by great red deer, elks, and boars, covered land that has long been arable. There were lakes and lagoons where for centuries there have been fields of corn. On the oldest sites of our towns were groups of huts made of clay and wattle, and dominated, perhaps, by the large stockaded house of the tribal prince. In the lochs, natural islands, or artificial islets made of piles (crannogs), afforded standing-ground and protection to villages, if indeed these lake-dwellings are earlier in Scotland than the age of war that followed the withdrawal of the Romans.
Alle bekijken
click to open popover

Dave S.
1,0 van 5 sterren BEWARE - bare-bones text, tiny font, no figures of any kind (e.g., photos, maps) no table of contents, index, or bibliography
22 september 2017 - Gepubliceerd op Amazon.com
Geverifieerde aankoop
Andrew Lang wrote an interesting history, but this particular publication is a summary of his larger work. Still and all I believe history buffs would find it well worth reading if not for one colossal defect. The usefulness to the reader of this "booklet" (perhaps "pamphlet" is the more deserved term) is greatly diminished by the greed of the publisher in producing such a "stripped down" version, text only in small font without any spacing between paragraphs, sections or chapters. Apparently the objective is to print the text using the least possible number of pages (save on paper, make more profit). I have encountered this scam before. Back in 2015, I ordered two books about the life and times of George Armstrong Custer writen by his wife, Elizabeth. In addition to the defects I'm describing here, these two works used even smaller font and had no page numbers. The publisher apparently seeks out material in the public domain (thus no royalty expense) and then produces the cheapest possible physical product. The product display in Amazon makes this unprofessional publication look pretty good. It looks like a substantial book with a handsome cover, no doubt product display in Amazon makes this unprofessional publication look pretty good. It looks like a substantial book with a handsome cover, no doubt containing many interesting reproductions of relevant historical paintings, plus some modern day photos (such as perhaps the field at Culloden or castle ruins), and helpful maps. BEWARE - there are no such amenities. There also is no table of contents, no index, no bibliography and of the some 300 footnotes in the original work by Lang, a mere selection of 40 are presented willy-nilly in the back of this book. And, the publisher is not even identified. I am reminded of the art vendor who advertised a portrait bust of Abraham Lincoln engraved in copper alloy suitable for wall hanging. After remitting something like $39.95 (what a deal) the customer received back a "penny". Was it a portrait of Lincoln? Was it a reproduction of an original engraving? Was it done in a beautiful copper alloy? Could it be hung on a wall? YES on all counts! So how could a customer not be happy displaying that penny on the living room wall?
Meer lezen
5 mensen vonden dit nuttig
Vertaal recensie in het Nederlands

Deborah Fieffer Rice
3,0 van 5 sterren Disjointed
9 april 2018 - Gepubliceerd op Amazon.com
Geverifieerde aankoop
Mr. Lang should have had a really good proofreader/editor. The information is great, but in places it seems as if he is just stating the information in what seems to be out of context, definitely needs to be more cohesive and flow from one subject to another. My history professor would have had a field-day with this particular written text; if it had been my work, I would have received a C-.
Meer lezen
2 mensen vonden dit nuttig
Vertaal recensie in het Nederlands

Z Dawit
5,0 van 5 sterren Terrifying and terrific short history
1 november 2019 - Gepubliceerd op Amazon.com
Geverifieerde aankoop
You probably already know Scotland is a place forged with fire and blood but how MUCH blood it really took to get to the present is almost inconceivable. Lots of great men and villains too! This is a really concise summary of the last thousand years of history of a place I have only dreamed of going but is very near my heart. Recommend for lovers of history.
Meer lezen
Vertaal recensie in het Nederlands

L. Coy
5,0 van 5 sterren A Short History of Scotland
20 december 2013 - Gepubliceerd op Amazon.com
Geverifieerde aankoop
It has proven to be very interesting. I've currently been reading a lot of Scottish Highland romance books and that has prompted an interest in just what Scotland was like centuries ago. This book has answered a number of questions I had and it has been very interesting reading. I would recommend it to anyone who may have questions but is not in to reading a long, sometimes boring, history book.
Meer lezen
3 mensen vonden dit nuttig
Vertaal recensie in het Nederlands

Janie Humphries
2,0 van 5 sterren Short History, Long Time To Reac
19 februari 2017 - Gepubliceerd op Amazon.com
Geverifieerde aankoop
While the information in the book is interesting, be aware that it was written in 1911 and the language and structure of the book are very much of that time. I found it very difficult to read. As other reviews have said, an assumption is made that the reader already knows a good deal about Scottish history. I found myself reading with my iPad at my side so I could look up references made, but not explained, by the author.
Meer lezen
3 mensen vonden dit nuttig
Vertaal recensie in het Nederlands
Ga naar Amazon.com om alle 61 recensies te bekijken 3,4 van 5 sterren
Ontdek het beste van shopping en entertainment
Gratis en snelle bezorging van miljoenen producten, onbeperkt streamen van exclusieve series, films en meer
> Ontdek Prime
Terug naar boven
Over ons
Verkoop bij ons
Amazon-betaalmethoden
We helpen je graag
© 1996-2020, Amazon.com, Inc. en dochterondernemingen