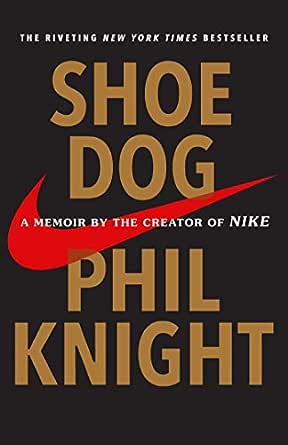 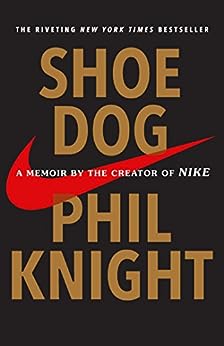 Shoe Dog: A Memoir by the Creator of Nike (English Edition) Kindle-editie

In this instant and tenacious New York Times bestseller, Nike founder and board chairman Phil Knight “offers a rare and revealing look at the notoriously media-shy man behind the swoosh” (Booklist, starred review), illuminating his company’s early days as an intrepid start-up and its evolution into one of the world’s most iconic, game-changing, and profitable brands.

Bill Gates named Shoe Dog one of his five favorite books of 2016 and called it “an amazing tale, a refreshingly honest reminder of what the path to business success really looks like. It’s a messy, perilous, and chaotic journey, riddled with mistakes, endless struggles, and sacrifice. Phil Knight opens up in ways few CEOs are willing to do.”

Fresh out of business school, Phil Knight borrowed fifty dollars from his father and launched a company with one simple mission: import high-quality, low-cost running shoes from Japan. Selling the shoes from the trunk of his car in 1963, Knight grossed eight thousand dollars that first year. Today, Nike’s annual sales top $30 billion. In this age of start-ups, Knight’s Nike is the gold standard, and its swoosh is one of the few icons instantly recognized in every corner of the world.

But Knight, the man behind the swoosh, has always been a mystery. In Shoe Dog, he tells his story at last. At twenty-four, Knight decides that rather than work for a big corporation, he will create something all his own, new, dynamic, different. He details the many risks he encountered, the crushing setbacks, the ruthless competitors and hostile bankers—as well as his many thrilling triumphs. Above all, he recalls the relationships that formed the heart and soul of Nike, with his former track coach, the irascible and charismatic Bill Bowerman, and with his first employees, a ragtag group of misfits and savants who quickly became a band of swoosh-crazed brothers.

Together, harnessing the electrifying power of a bold vision and a shared belief in the transformative power of sports, they created a brand—and a culture—that changed everything.

A book about business, friendship, sport and working together, this is the memoir of the legendary co-founder of Nike - today a globe-spanning icon with current annual sales in excess of ¢30 billion - he first created the company in 1962 with just ¢50 that he borrowed from his dad
Alle bekijken

Wally Bock
5,0 van 5 sterren One of the Best Books about What It's Like to Run a Fast-Growing, Innovative Business
13 december 2016 - Gepubliceerd op Amazon.com
Geverifieerde aankoop
Most business memoirs are self-serving, boring, and poorly written. To put it bluntly, they are “crap between covers.” There are very few business memoirs that are even good, since most of them make the person writing the memoir seem like a business savant who always knew the right answers and knew things would come out right. Great business memoirs are different. They portray a business situation as it was. Phil Knight’s Shoe Dog: A Memoir by The Creator of Nike is a great business memoir.

You’ll learn about the constant struggle to fund growth. Most of the books about entrepreneurship don’t tell you about that. If you start a business and that business starts to grow, you are funding the process out ahead of your cash flow. The result is that you’re chronically cash poor, even when you’re fabulously profitable, and that is both counterintuitive and very tough to manage.

You’ll also learn about the plusses and minuses of going public. There’s a lot here about relationships and values, and staying true to what you think is important. There are lessons about how putting people in the right job makes all the difference. And, there are lessons about balancing being a hero at work with being a parent at home.

There are also important lessons about not taking yourself too seriously. Knight describes the “executive retreats” that Nike would have. They called them “Buttface sessions.” The name came from one of the early employees who said that Nike was the only company their size where you could shout out “Hey, buttface!” and the entire management team would turn around.

There’s another important thing, too. If you think that innovation is only something that high-tech companies do, or that it requires coding, read this book. A lot of Nike’s success comes from being an innovator in shoes.

Shoe Dog is superbly written, and you’ll enjoy it if you just read it as a story. But if you’re in business, and especially if you’re starting a business and wanting to make it grow, this book should be on your must-read list. Keep it handy, right near Ben Horowitz’s The Hard Thing about Hard Things.

Toward the end of the book, Phil Knight says this:

“God, how I wish I could relive the whole thing. Short of that, I’d like to share the experience, the ups and downs, so that some young man or woman, somewhere, going through the same trials and ordeals might be inspired or comforted. Or warned. Some young entrepreneur, maybe, some athlete or painter or novelist, might press on.”

I think he achieved his goal. If you want some seasoned advice to help you run and grow your company, or if you just want to read a great business memoir, pick up a copy of Shoe Dog: A Memoir by The Creator of Nike.
Meer lezen
235 mensen vonden dit nuttig
Vertaal recensie in het Nederlands

David L. Bahnsen
5,0 van 5 sterren Genius
18 december 2017 - Gepubliceerd op Amazon.com
Geverifieerde aankoop
It may seem surprising that a review of a “sports book” would appear on my site, where book reviews are essentially reserved for the domain of politics and economics. But that surprise would stem from a gigantic misunderstanding, for Shoedog is no “sports book.” Rather, it is a virtual economics textbook. And one every business student in America should read. Indeed, it is one a certain White House occupant should read as well.

For those interested in sports, as I am, history, as I am, and business, as I am, this book was a tremendous synthesis of the three, in the particular context of describing the birth of one of the greatest brands in American history – indeed, in world history … I doubt the story of a company’s founding and rise to greatness has ever ended a couple decades before the company’s peak, but that is the genius of Shoedog. Nike founder, Phil Knight, begins the story of this iconic brand at the most embryonic of stages, and ends the story in 1980, at their public offering, despite two and a half decades of utter domination that commenced subsequently. The story of Nike to us mere mortals is Michael Jordan, Tiger Woods, Kobe Bryant, and “Just Do It.” But as readers of this fine book will discover, the real story of Nike took place in the late 1960’s and throughout the 1970’s, as the formative challenges that make a business took place. And if any company would become rightful heir to “Just Do It” — it was Nike.

Nike has employed hundreds of thousands of people over the decades, and has created untold amounts of wealth by giving consumers something they wanted: Initially, a high quality running shoe; eventually, a brand — a belief — an affiliation. But the genius of finding future basketball, track, and golf stars to endorse the brand was a small part of the story of this company’s ascension. The genius that created Nike is the genius of this book: It focused on personnel management, on global cost synergies, on harnessing an international supply chain the likes of which the world had never seen, on overcoming legal adversity, and above all else, managing the challenges of liquidity and capital that nearly any company faces in the early innings of their existence. This is an economics book. It is a tribute to the miracle of free trade which has created more wealth than any other phenomena in the history of civilization. It is a rebuke of the evils of crony capitalism and those rent-seeking piranhas who would attempt to use government alliances to strangle healthy competition.

We are living in an era when forces on the right and the left are capitulating to a childish view of globalization — one seeking to make it a bogeyman for anything and everything — and ignoring the absolutely indisputable evidence for the enhancement of quality of life globalization has created. Few companies better illustrate what matching willing buyers and sellers around the world can mean for consumers, for producers, for shareholders, for employees, and for indeed all stakeholders in a given organization than Nike. While countless others do, for it is a universal lesson, Nike is the story of a young man and his track coach creating $100 billion of wealth that has circulated across a vast, vast ecosystem, by understanding the miracles of global trade. I cannot recommend this book strongly enough for one looking for a biographical narrative version of an economics lesson, versus the academic attempts that often prove too dry. The story of Shoedog was anything but dry, and the message of Shoedog is anything but trite.
Meer lezen
31 mensen vonden dit nuttig
Vertaal recensie in het Nederlands

Missy Reid
5,0 van 5 sterren Knight is the most interesting person I never knew I wanted to meet
21 januari 2017 - Gepubliceerd op Amazon.com
Geverifieerde aankoop
I haven't picked out my next book yet, but I'm prepared to be let down. This one's going to be hard to beat. Shoe Dog is laugh-out-loud funny; it's sad; it's exciting; it's smart; it's honest; it's inspiring. I didn't want to reach the last page. I closed the book craving more, so I immediately slid into fanatic mode and discovered that a pilgrimage to the Nike campus in Beaverton would take me 39 hours. And there's not even a tour.

So now I'm back to normal, but I still very enthusiastically recommend this book. In the most basic terms, Phil Knight's story is one of success. It's no secret that Nike is a giant, but Knight nevertheless creates page-turning suspense at several junctures. He also gives us an intimate look at his personal life, which makes complete sense, because business is personal. For people who truly believe in what they're doing, it's impossible to separate the two. Knight's passion is punctuated by his referring to Nike as his business child and with his proclamation that "if it ever does become just business, that will mean that business is very bad." He is the most interesting person I never knew I wanted to meet.

As I approached the final pages, the critic in me wondered how this story could be complete without mention of the Nike sweat-shop crisis. Was it strategically omitted because it might ruin the warm-fuzzy feeling I have now? The answer is no. Knight includes it in the final section that brings everything up to date, in the "where are they now?" pages. I won't go into the content, but I will say that warm and fuzzy remain intact. And I have more respect for the company than ever. I am almost embarrassed that I run in Adidas.
Meer lezen
59 mensen vonden dit nuttig
Vertaal recensie in het Nederlands
Ga naar Amazon.com om alle 3.012 recensies te bekijken 4,8 van 5 sterren
Terug naar boven
Over ons
Verkoop bij ons
We helpen je graag
© 1996-2020, Amazon.com, Inc. en dochterondernemingen