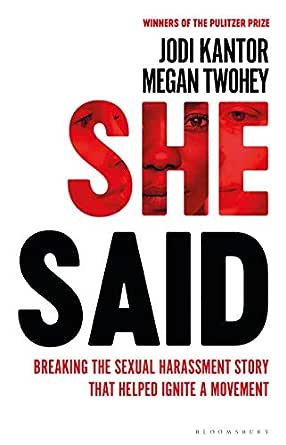 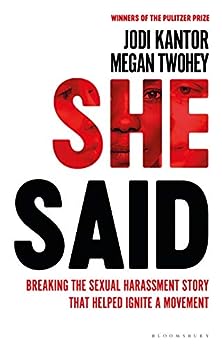 "A binge-read of a book, propelled, for the most part, by a clear, adrenaline-spiking ticktock of how their stories came together, and studded with all manner of new astonishing details...This is Kantor and Twohey's story and one everyone should read for a panoply of reasons. By simply recounting their reporting, the two offer a masterful explanation of how a man like Weinstein is allowed to abuse his power and many women for so long in something approaching plain sight...In many ways, "She Said" is more significant than "All the President's Men," and not just because journalism is currently under siege, financially and politically, in a way it was not in the 1970s. There was a finite number of people responsible for the crimes of the Nixon administration; the alleged crimes of Harvey Weinstein are also the crimes of our culture, and they continue to be committed every day by many men all around the world. Although now, one hopes, without as much silence, secrecy and cultural complacency." -- Los Angeles Times Review "'She Said, ' a new book detailing the astonishing behind-the-scenes of the New York Times's bombshell Harvey Weinstein exposé, is an instant classic of investigative journalism. If your jaw dropped at the newspaper's original allegations against the predatory movie mogul, prepare for it to hit the floor as authors Jodi Kantor and Megan Twohey recount how they uncovered the story: secret meetings, harrowing phone calls, private text exchanges with A-list actresses agonizing over whether to go on the record. Ashley Judd plays the stoic warrior; Gwyneth Paltrow, the circumspect liaison who tries to help the reporters find other sources." - Monica Hesse, The Washington Post "She Said, the journalists' clear-eyed record of that effort, reads at some moments as a thriller, and at others as an indictment of a system full of rot. But it is ultimately about the women, bonded in their pain, who refused to be silent any longer." - The Atlantic "'She Said, ' a chronicle of the #MeToo era by Jodi Kantor and Megan Twohey, reveals the power of women who, together, refused to stay silent." - The New Republic "Kantor and Twohey even-handedly assess the impact of the #MeToo movement thus far while also turning a perceptive, hopeful eye on the way forward." -- Esquire "She Said is the story behind the story that changed the world....Come for the shocking reveals, stay for how the book expertly parses the current moment."--Refinery29 "'She Said' is riveting and, crafted by two of the country's most talented journalists, a vibrant, cinematic read."-- CNN "Jodi Kantor and Megan Twohey are two names that future generations will read about in history books." -- Mashable "Kantor and Twohey have crafted their news dispatches into a seamless and suspenseful account of their reportorial journey, a gripping blow-by-blow of how they managed, "working in the blank spaces between the words," to corroborate allegations that had been chased and abandoned by multiple journalists before them. . . Watching Kantor and Twohey pursue their goal while guarding each other's back is as exhilarating as watching Megan Rapinoe and Crystal Dunn on the pitch. . . It turns out we did need to hear more about Weinstein -- and the "more" that Kantor and Twohey give us draws an important distinction between the trendy ethic of hashtag justice and the disciplined professionalism and institutional heft that actually got the job done."--Susan Faludi, New York Times Book Review "An instant classic of investigative journalism. The book is packed with reluctant sources, emotional interviews, clandestine meetings, impatient editors, secret documents, late-night door knocks, toady lawyers and showdowns with Weinstein himself. The cumulative effect is almost cinematic, a sort of "All the President's Men" for the Me Too era, except the men are women, and they don't protect the boss, they take him down."-- Carlos Lozada, The Washington Post "She Said is first and foremost an account of incredible reporting, the kind that takes time, diligence and the kind of institutional support many newspapers can no longer afford. For journalist readers, it is a chance to watch experts at work. And this book is a rare view for nonjournalists into the exacting and rigorous process of quality reporting, and it acts as an implicit counterargument to rising, ambient skepticism of the press. Kantor and Twohey show the background research they ran on sources, to protect both them and the paper, the careful way they documented and substantiated information, and their extraordinary precision in acquiring proof. . . Deeply suspenseful, a kind of less swaggering All the President's Men."--NPR "Kantor and Twohey, writing a professional memoir that often reads as a riveting work of true crime, offer damning evidence for what is by now a familiar theme: a legal system that promises blindness and balance--the mechanisms through which truth might be finally determined--and too often comes up short. She Said finds Kantor and Twohey (and the extensive team of editors, lawyers, and fact-checkers who bolster their work) exposing not merely Weinstein, but also the system that kept him, at the expense of so many others, safe... So while there is triumph in She Said--the book is a tale of investigative reporting's power to nudge the world out of its complacencies--there is also a sense of necessary open-endedness... The journalist offers the evidence; it is for the rest of us to decide what the justice looks like."--The Atlantic "Kantor and Twohey are godsends...their reporting and their commitment were pivotal in the #MeToo movement, and this history is flush with gratitude for the women who trusted them with their stories." - The Oregonian

AN INDEPENDENT BOOK OF THE DECADE
A FINANCIAL TIMES, NEW STATESMAN, DAILY TELEGRAPH, METRO, ELLE AND OLDIE BOOK OF THE YEAR

'Feels like a Hollywood film in the making' DAILY TELEGRAPH

'Has the morally satisfying arc of a thriller, with all the suspense. For lovers of Spotlight' i

'Seismic. Examines what happens when a bully is cornered' OBSERVER

'Incredible. It staggered me. I could talk all day about this book' PANDORA SYKES

'All the President's Men for the #MeToo era' WASHINGTON POST

'A binge-read of a book. Adrenaline-spiking' LOS ANGELES TIMES

On 5 October 2017, the New York Times published an article by Jodi Kantor and Megan Twohey that helped change the world.

Hollywood was talking as never before. Kantor and Twohey outmanoeuvred Harvey Weinstein, his team of defenders and private investigators, convincing some of the most famous women in the world – and some unknown ones – to go on the record.

For months ahead of the story breaking, Kantor and Twohey had been having confidential discussions with top actresses, former Weinstein employees and other sources, learning of disturbing, long-buried allegations. The journalists meticulously picked their way through a web of decades-old secret payouts and non-disclosure agreements, pressed some of the most famous women in the world – and some unknown ones – to risk going on the record, and faced down Weinstein, his team of high-priced defenders, and even his private investigators.

In She Said, Kantor and Twohey relive in real-time what it took to break the story and give an up-close portrait of the forces they were up against. They describe the experiences of the women who spoke up – for the sake of other women, for future generations, and for themselves.

Their stories have never been told in this way before.

Kindlelover
5,0 van 5 sterren BRAVO! 5-Plus Stars!
11 september 2019 - Gepubliceerd op Amazon.com
Geverifieerde aankoop
I have the great honor to leave the first review for this amazing book. Ms. Kantor and Ms Twohey, two brave Pulitizer Prize winning investigative journalists, have given us their in-depth account of unraveling the alleged sex scandal that rocked not only Hollywood, but the world. And the complicity behind one of Hollywood's most dispicable moguls—or should I say monster— keying on his abusive sense of power and entitlement. A gripping page-turner that reads like a great detective story, it should be read by everyone—men and women alike. And by your sons and daughters once they are of age. The truth is the most powerful tool we have. Ms. Kaplan and Ms. Twohey are both inspirations, in more ways than they know, as are all the "she-said" victims who have spoken out. I can't wait to meet them at their book signing later this year in Los Angeles! BRAVO!
Meer lezen
75 mensen vonden dit nuttig
Vertaal recensie in het Nederlands

Reader
5,0 van 5 sterren DEVOURED IN A DAY
11 september 2019 - Gepubliceerd op Amazon.com
This book is so much more than what you think it will be. Not a bunch of warmed-over Harvey Weinstein, but a fascinating and even thrilling tale of breaking the HW story. Deeply personal, it delves satisfyingly into so many related issues. The Christine Blasey Ford sections, in particular, were terrific. A page turner that will have you thinking about the BIG issues.
Meer lezen
73 mensen vonden dit nuttig
Vertaal recensie in het Nederlands

Elliot Reiter
5,0 van 5 sterren Journalism at its Best
13 september 2019 - Gepubliceerd op Amazon.com
Geverifieerde aankoop
I read this book in one day over two sittings. This was a tremendous feat of journalism and reminds us of the importance of a free press. The authors spent 3 years on this story beginning with the women Trump abused, the long history of abuse by Weinstein and finally the Blasey/Kavanaugh incident. The bulk of the book covers the Weinstein investigation. The women had to identify victims and get them to speak up. But ultimately the needed to get corroboration and documentation from within the Weinstein organization. Fortunately they found the insider who was outraged enough by Weinstein's behavior to provide the documentation the authors needed to publish their original NY Times article. Kudos to the authors and all the people who put themselves out there to do the right thing. I look forward to seeing this book on Best Seller lists very quickly.
Meer lezen
30 mensen vonden dit nuttig
Vertaal recensie in het Nederlands

Amazon Customer
5,0 van 5 sterren A difficult book to read
11 september 2019 - Gepubliceerd op Amazon.com
Geverifieerde aankoop
I expected to be difficult to read after all the stories. This a well written book by the authors. The courage of the authors and The New York Times demonstrated in this story gives me hope. Because it is well written and organized I could not put it down
Meer lezen
32 mensen vonden dit nuttig
Vertaal recensie in het Nederlands

M. Murray
5,0 van 5 sterren A game-changer and must read.
12 september 2019 - Gepubliceerd op Amazon.com
Geverifieerde aankoop
Having followed this story as a NYT subscriber, I doubted there was much more to offer. I could not have been more wrong. The classic “story behind the story” is revealed here and is as compelling as the headline itself. The authors waste no time and breathlessly narrate the story with no effort and characters that are other-worldly.