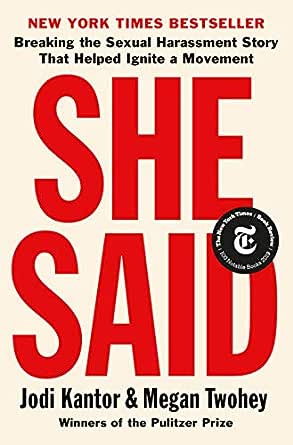 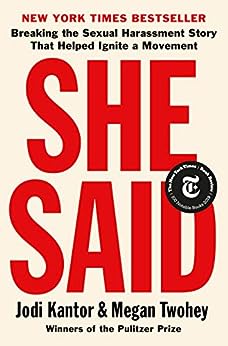 "An instant classic of investigative journalism...‘All the President’s Men’ for the Me Too era." — Carlos Lozada, The Washington Post

From the Pulitzer Prize-winning reporters who broke the news of Harvey Weinstein's sexual harassment and abuse for the New York Times, Jodi Kantor and Megan Twohey, the thrilling untold story of their investigation and its consequences for the #MeToo movement

For many years, reporters had tried to get to the truth about Harvey Weinstein’s treatment of women. Rumors of wrongdoing had long circulated. But in 2017, when Jodi Kantor and Megan Twohey began their investigation into the prominent Hollywood producer for the New York Times, his name was still synonymous with power. During months of confidential interviews with top actresses, former Weinstein employees, and other sources, many disturbing and long-buried allegations were unearthed, and a web of onerous secret payouts and nondisclosure agreements was revealed. These shadowy settlements had long been used to hide sexual harassment and abuse, but with a breakthrough reporting technique Kantor and Twohey helped to expose it. But Weinstein had evaded scrutiny in the past, and he was not going down without a fight; he employed a team of high-profile lawyers, private investigators, and other allies to thwart the investigation. When Kantor and Twohey were finally able to convince some sources to go on the record, a dramatic final showdown between Weinstein and the New York Times was set in motion.

Nothing could have prepared Kantor and Twohey for what followed the publication of their initial Weinstein story on October 5, 2017. Within days, a veritable Pandora’s box of sexual harassment and abuse was opened. Women all over the world came forward with their own traumatic stories. Over the next twelve months, hundreds of men from every walk of life and industry were outed following allegations of wrongdoing. But did too much change—or not enough? Those questions hung in the air months later as Brett Kavanaugh was nominated to the Supreme Court, and Christine Blasey Ford came forward to testify that he had assaulted her decades earlier. Kantor and Twohey, who had unique access to Ford and her team, bring to light the odyssey that led her to come forward, the overwhelming forces that came to bear on her, and what happened after she shared her allegation with the world.

In the tradition of great investigative journalism, She Said tells a thrilling story about the power of truth, with shocking new information from hidden sources. Kantor and Twohey describe not only the consequences of their reporting for the #MeToo movement, but the inspiring and affecting journeys of the women who spoke up—for the sake of other women, for future generations, and for themselves.

From the Pulitzer-prize winning reporters who broke the news of Harvey Weinstein's sexual harassment and abuse for the New York Times, Jodi Kantor and Megan Twohey, the thrilling untold story of their investigation and its consequences for the #MeToo movement
On October 5, 2017, the New York Times published an article by Jodi Kantor and Megan Twohey--and then the world changed. For months Kantor and Twohey had been having confidential discussions with top actresses, former Weinstein employees and other sources, learning of disturbing long-buried allegations, some of which had been covered up by onerous legal settlements. The journalists meticulously picked their way through a web of decades-old secret payouts and nondisclosure agreements, pressed some of the most famous women in the world--and some unknown ones--to risk going on the record, and faced down Weinstein, his team of high-priced defenders, and even his private investigators.
But nothing could have prepared them for what followed the publication of their Weinstein story. Within days, a veritable Pandora's Box of sexual harassment and abuse was opened, and women who had suffered in silence for generations began coming forward, trusting that the world would understand their stories. Over the next twelve months, hundreds of men from every walk of life and industry would be outed for mistreating their colleagues. But did too much change--or not enough? Those questions plunged the two journalists into a new phase of reporting and some of their most startling findings yet.

With superlative detail, insight, and journalistic expertise, Kantor and Twohey take us for the first time into the very heart of this social shift, reliving in real-time what it took to get the story and giving an up-close portrait of the forces that hindered and spurred change. They describe the surprising journeys of those who spoke up--for the sake of other women, for future generations, and for themselves--and so changed us all.

Kindlelover
5,0 van 5 sterren BRAVO! 5-Plus Stars!
11 september 2019 - Gepubliceerd op Amazon.com
Geverifieerde aankoop
I have the great honor to leave the first review for this amazing book. Ms. Kantor and Ms Twohey, two brave Pulitizer Prize winning investigative journalists, have given us their in-depth account of unraveling the alleged sex scandal that rocked not only Hollywood, but the world. And the complicity behind one of Hollywood's most dispicable moguls—or should I say monster— keying on his abusive sense of power and entitlement. A gripping page-turner that reads like a great detective story, it should be read by everyone—men and women alike. And by your sons and daughters once they are of age. The truth is the most powerful tool we have. Ms. Kaplan and Ms. Twohey are both inspirations, in more ways than they know, as are all the "she-said" victims who have spoken out. I can't wait to meet them at their book signing later this year in Los Angeles! BRAVO!
Meer lezen
75 mensen vonden dit nuttig
Vertaal recensie in het Nederlands

Reader
5,0 van 5 sterren DEVOURED IN A DAY
11 september 2019 - Gepubliceerd op Amazon.com
This book is so much more than what you think it will be. Not a bunch of warmed-over Harvey Weinstein, but a fascinating and even thrilling tale of breaking the HW story. Deeply personal, it delves satisfyingly into so many related issues. The Christine Blasey Ford sections, in particular, were terrific. A page turner that will have you thinking about the BIG issues.
Meer lezen
73 mensen vonden dit nuttig
Vertaal recensie in het Nederlands

Elliot Reiter
5,0 van 5 sterren Journalism at its Best
13 september 2019 - Gepubliceerd op Amazon.com
Geverifieerde aankoop
I read this book in one day over two sittings. This was a tremendous feat of journalism and reminds us of the importance of a free press. The authors spent 3 years on this story beginning with the women Trump abused, the long history of abuse by Weinstein and finally the Blasey/Kavanaugh incident. The bulk of the book covers the Weinstein investigation. The women had to identify victims and get them to speak up. But ultimately the needed to get corroboration and documentation from within the Weinstein organization. Fortunately they found the insider who was outraged enough by Weinstein's behavior to provide the documentation the authors needed to publish their original NY Times article. Kudos to the authors and all the people who put themselves out there to do the right thing. I look forward to seeing this book on Best Seller lists very quickly.
Meer lezen
30 mensen vonden dit nuttig
Vertaal recensie in het Nederlands

Amazon Customer
5,0 van 5 sterren A difficult book to read
11 september 2019 - Gepubliceerd op Amazon.com
Geverifieerde aankoop
I expected to be difficult to read after all the stories. This a well written book by the authors. The courage of the authors and The New York Times demonstrated in this story gives me hope. Because it is well written and organized I could not put it down
Meer lezen
32 mensen vonden dit nuttig
Vertaal recensie in het Nederlands

M. Murray
5,0 van 5 sterren A game-changer and must read.
12 september 2019 - Gepubliceerd op Amazon.com
Geverifieerde aankoop
Having followed this story as a NYT subscriber, I doubted there was much more to offer. I could not have been more wrong. The classic “story behind the story” is revealed here and is as compelling as the headline itself. The authors waste no time and breathlessly narrate the story with no effort and characters that are other-worldly.