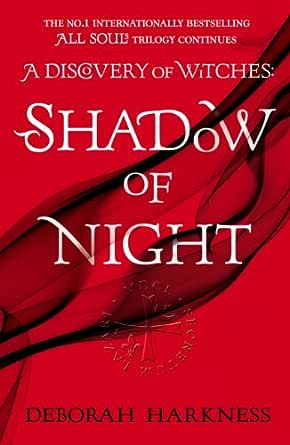 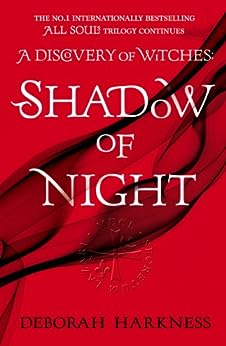 "A captivating and romantic ripping yarn."
--E. L. James, "Books of the Year 2012: Authors Choose Their Favourites," The Guardian "The joy that Harkness, herself a historian, takes in visiting the past is evident on every page. . . . A great spell, the one that can enchant a reader and make a 600-page book fly through her fingertips, is cast. . . . Its enduring rewards are plenty."
--Entertainment Weekly "Fans of Harkness's 2011 debut A Discovery of Witches will be delighted. . . . Harkness delivers enough romance and excitement to keep the pages turning. Readers will devour it."
--People "Deborah Harkness takes us places we've never been before. . . . Shadow of Night isn't just about wonderfully detailed descriptions of England in 1591, it's about being there. Readers time-travel as precisely and precariously as Diana and Matthew do. . . . Shadow ends as Discovery did with promises of more to come. Lucky for us."
--USA Today "Harkness exudes her own style of magic in making the world of late 16th century England come alive. . . . Enchanting, engrossing and as impossible to put down as its predecessor, Shadow of Night is a perfect blend of fantasy, history and romance. Its single greatest flaw is, after almost 600 pages, it's over. If you've already read and enjoyed A Discovery of Witches, picking up Shadow of Night is an absolute requirement. Otherwise, pick up both, and consider your reading list complete."
--Miami Herald "Picking up where she left off in last year's A Discovery of Witches, Harkness proves she's not suffering from a sophomore slump with this addictive tale of magic, mayhem and two lovers."
--Chicago Tribune "Rich, period fun, particularly delightful in its witty characterization of historical immortals . . . Shadow ramps up the supernatural suspense."
--New York Daily News "This novel is as much a love story about a bygone era as it is about Matthew and Diana. It overflows with a colorful cast of characters, many of whom Harkness has plucked straight from the history books, and Harkness renders the late 1500s in exquisite detail. . . . The writing is so rich, the characters so compelling . . . and best of all, Harkness manages to execute with aplomb the act of answering old questions while posing new ones that will intensify anticipation for the final installment. Readers who have been counting down the days, take heart: The wait was most assuredly worth it."
--BookPage

"Harkness delights in lining up the living dead and modern academic history. . . . This tale of a feminist Yankee in Queen Elizabeth's court charms amid the tumult, as the gifted heroine and her groom fight for generations and another sequel to come in order to protect the magical world that's all around us."
--Publishers Weekly

*Now a major TV series. A Discovery of Witches season 2 coming soon.*
*Read the novel Season 2 is based on.*


Fall deeper under the spell of Diana and Matthew in the captivating second volume of the No.1 internationally bestselling ALL SOULS trilogy, following A DISCOVERY OF WITCHES. Perfect for fans of Neil Gaiman, Diana Gabaldon and J. K. Rowling.

In a world of witches, daemons and vampires the fragile balance of peace is unravelling. Diana and Matthew's forbidden love has broken the laws dividing creatures. To discover the manuscript which holds their hope for the future, they must now travel back to the past.

When Diana Bishop, descended from a line of powerful witches, discovered a significant alchemical manuscript in the Bodleian Library, she sparked a struggle in which she became bound to long-lived vampire Matthew Clairmont. Now the coexistence of witches, daemons, vampires and humans is dangerously threatened.

Seeking safety, Diana and Matthew travel back in time to London, 1590. But they soon realise that the past may not provide a haven. Reclaiming his former identity as poet and spy for Queen Elizabeth, the vampire falls back in with a group of radicals known as the School of Night. Many are unruly daemons, the creative minds of the age, including playwright Christopher Marlowe and mathematician Thomas Harriot.

Together Matthew and Diana scour Tudor London for the elusive manuscript Ashmole 782, and search for the witch who will teach Diana how to control her remarkable powers...

Sheila M
5,0 van 5 sterren A Journey Back in Time
29 december 2017 - Gepubliceerd op Amazon.com
Geverifieerde aankoop
FINAL DECISION: A fine continuation of the story of a witch, a vampire and their search which takes them back in time. I loved how this book developed their relationship and challenged their characters through resurrection of their pasts.

THE STORY: Diana Bishop, a witch, and Matthew Clairmont, a vampire, have broken the law of creatures by having a romantic relationship. Jumping off from the events in book one, Diana and Matthew have traveled back in time to Elizabethan England in order to find a teacher to help Diana learn about and control her powers. Although the two seek safety in the past, they find that a whole new host of dangers threatens them and their relationship.

OPINION: A long and meandering journey through Elizabeth's England where the fictional characters mix with real historical figures, this book develops both the mythology of the trilogy and also the relationship between Diana and Matthew.

I enjoyed seeing these characters approach the challenges that face them. The book, which like the others in the series is over 550 pages, asks for a commitment from its readers. Everything is slow and deliberate -- not boring, not pointless -- and takes its time developing both the characters and the plot. At times during the book, I wondered whether the destination would be worth it. While the conclusion excited me about the finale book in the series, the entirety of the development of the relationship between Diana and Matthew and their own working out of their own challenges from their past snagged me for every page.

The book doesn't always go in the way that I expected it to and it is certainly an epic read. It does suffer somewhat from being part of the trilogy and the middle book at that. At the end of the book there is no real conclusion -- because there is one more book. Thus, this book doesn't truly stand on its own and requires reading both the first and third books in the series.

WORTH MENTIONING: The historical expertise of the author is put to good use here. The past feels authentic and I enjoyed using this book as a springboard to learn more about the real historical figures depicted in the book.

CONNECTED BOOKS: SHADOW OF NIGHT is the second book in the All Souls Trilogy. The book should be read as part of the trilogy.

STAR RATING: I give this book 4.5 stars.

Librarijen
3,0 van 5 sterren Not quite as good as the first one.
19 december 2018 - Gepubliceerd op Amazon.com
Geverifieerde aankoop
I was soooo looking forward to reading Shadow of Night because I LOVED Discovery of Witches . However, I did not love this one as much. :(

Although I love the detail that makes me feel like I am right there in the book, living the life with Matthew and Diana - the sights, the smells, the textures and temperatures - I felt that this book was unnecessarily long and had too many uneventful stretches. There were parts that I really did like, mostly near the beginning and of course toward the end, but if this had been a stand-alone novel, I'm not sure I would have continued on through some of the mundane middle parts.

This novel is mostly set in the past. The attention to detail is amazing! Beautiful descriptions of the voluminous clothing, intricate hairstyles, wonderful castles, markets and countrysides. I can't imagine how much research must have gone into writing this. If any of it happens to be incorrect, it's convincing enough that it would be difficult to dispute. I mean it's not as if any of us can time travel back to the 16th century in order to do a little fact checking.

I will definitely read The Book of Life , but I am taking a break and reading a couple of new releases that I have been waiting for before I dive back into The All Souls Trilogy
Meer lezen
24 mensen vonden dit nuttig
Vertaal recensie in het Nederlands

H. Grove (errantdreams)
2,0 van 5 sterren Consider my rating a 2.5
18 mei 2015 - Gepubliceerd op Amazon.com
Geverifieerde aankoop
Shadow of Night follows on the heels of A Discovery of Witches. In some ways Shadow of Night is the better book–the text flows more smoothly, not every single character is cranky all the time, and the pacing has improved. However, it has a few flaws of its own.

First, the time-walking; I have a few problems with how this was carried out. For instance, the historical Matthew conveniently vanishes with future Matthew visiting. I can see how this was the only way Harkness could have the story she wanted, but it’s such a bald-faced deus ex machina. Matthew of course knows the famous historical figures of the time, including queens and emperors, which seems awfully stupid for a creature whose very existence relies on everyone else not noticing that he isn’t aging. Matthew and Diana also seem to have picked a very unstable and dangerous time to visit; I never really figured out why they thought that was a good idea. They’re supposed to not make changes to the past, but how could they possibly not when they’re dealing with such powerful people? And yet of course they don’t end up changing too much despite everything they’re doing that the time-appropriate Matthew wouldn’t have. There’s also the inevitable historical trope of the headstrong woman vs. the overprotective man in her life.

Diana is still a Mary Sue, right down to taking in a street urchin on a whim who then becomes a treasured member of the family. The unique familiar. The need for a highly unusual set of teachers. The jealousy or adoration that everyone feels for her. (Yes, even the relevant emperor becomes besotted with Diana. Don’t tell me you’re surprised.) She’s also still ridiculously easy for people to manipulate; she does a lot of stupid stuff–but of course since she’s a Mary Sue, these things don’t come back to haunt her.

What I really want to know is how on earth Matthew-from-the-future and Diana could possibly expect historical Matthew to not notice (after modern Matthew goes back to the future) that he’s been out of commission for ages. I don’t care how much his friends are determined to shield him from that knowledge, it’s going to be really hard to avoid people, say, asking him where his wife is, given that they got to know everyone. It just doesn’t add up. Again, it’s a hand-waved deus ex machina.
Meer lezen
51 mensen vonden dit nuttig
Vertaal recensie in het Nederlands

Barbara
2,0 van 5 sterren Really boring book
6 december 2018 - Gepubliceerd op Amazon.com
Geverifieerde aankoop
I thought it was going to be as good as the first one but I was wrong. This book is very boring and confusing. I really struggled to finish it because nothing interesting happens, well maybe a couple things but for the most part it’s all the same. Too much description, excessively in my opinion. Half way through it and they’re still stuck on the same conflicts without any solutions.
I usually have no issues on reading long books but this one felt more like a “have to finish it” because I’d already spent the money.
Not recommend it at all!
Meer lezen
13 mensen vonden dit nuttig
Vertaal recensie in het Nederlands
Ga naar Amazon.com om alle 4.047 recensies te bekijken 4,5 van 5 sterren
Terug naar boven
Over ons
Verkoop bij ons
We helpen je graag
© 1996-2020, Amazon.com, Inc. en dochterondernemingen