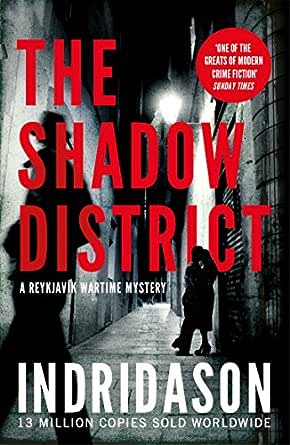 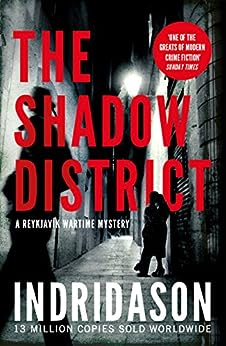 Praise for The Shadow District

"There's always a solid sense of history in Arnaldur Indridason's moody Icelandic mysteries. With his usual delicate touch, Indridason weaves in just enough folklore to remind us that a nation can never live down its legends."--New York Times Book Review

"The intertwining stories will keep readers engaged until the book's unexpected ending; also absorbing are Indridason's characters, who make wartime and today's Iceland come to life. The dialogue rings true and impart a forthright yet gentle tone that matches the harsh but dreamy landscape, which is lovingly described."--Booklist

"With minimalist prose, Indridason skillfully weaves the present-day murder with the past in this classic whodunit that ends with a satisfying and logical resolution."--Kirkus Reviews

"Outstanding series launch...Indridason provides a great window into Icelandic culture as he explores his recurring themes of greed and abuse of power."--Publishers Weekly (starred)

"A welcome addition from a master of the genre."--Library Journal (starred)

"Terrific...the deftly spun Shadow District leaves us eager to read the next installment in the series."--Chicago Tribune

"The steady progression of unearthing clues and witnesses to the mysteries is so riveting...readers will not find the story lacking in any way."--Mystery Scene

"The Shadow District is [Arnaldur's] first in a new series, and it's a terrific beginning. As always the author's characters and plot are believable and engrossing, and the glimpses into Icelandic history are an added plus."--Marilyn's Mystery Reads

"Indridason is an international literary phenom. I can't wait for the next." --Harlan Coben

"Puts Iceland on the map as a major destination for enthusiasts of Nordic crime fiction." --Marilyn Stasio, The New York Times Book Review

"Iceland's Indridason is a master of the hard-edged realist psychological thriller, anchoring his stories in the dark side of contemporary Icelandic life." --Men's Journal

"Classic mystery fiction, both compassionate and thrilling. Indridason is one of the brightest stars in the genre's dark skies." --John Connolly

"Like his protagonist, Indridason is calm, methodical and unassuming. With Reykjavik's nights as a backdrop, what starts out as a modest tale of an unfortunate death develops into a deeply involving tale of chronic neglect, drug addiction, spousal abuse and the unsavory nature of fate." --Chicago Tribune, Crime Fiction Roundup

"Indridason and Stieg Larsson have produced two of the best crime novels of the year." --The Independent(UK)

"Every one of these writers is good [Hakan Nesser, Kjell Eriksson, Karin Fossum], but in my book, Arnaldur Indridason is even better." --Joe Queenan, Los Angeles Times

LONGLISTED FOR THE CWA INTERNATIONAL DAGGER 2018


In wartime Reykjavík, a young woman is found strangled in a dangerous area known as ‘the shadow district’. An Icelandic detective and a member of the American military police are on the trail of a brutal killer.

An elderly man is discovered dead on his bed, smothered with his own pillow. Konrád, a retired detective, finds old newspaper cuttings in the man’s home reporting the shadow district murder. It’s a crime Konrád remembers, having grown up in the same neighbourhood.

Why, after all this time, would an old crime resurface? How are these events connected across the decades? And will Konrád’s link to the past help him solve the case and finally lay the ghosts of wartime Reykjavík to rest?

J'MO
4,0 van 5 sterren Indridason is back!
12 juni 2017 - Gepubliceerd op Amazon.com
Geverifieerde aankoop
The story takes place in two time periods (late in WWII in 'occupied' Iceland where the central crimes occur, and perhaps six or seven decades later when one of the original investigators is found dead). Indridason is a master story teller. He does his usual excellent job of blending Icelandic history, culture and geography into the mystery. His characters have great depth; his crimes are commonplace (by that I mean Indridason doesn't plot bizarre crimes planned and carried out by unbelievable characters - his are realistic crimes and criminals). All of the characters are, to some extent, flawed - perhaps that is what makes them realistic.

What I like about this new series is that it is not as dark as the previous series about Erlendur - dark because of the burdens carried by the protagonist from a tragic childhood. However, don't look for smart repartee in either series as it is not Indridason's style (and after all, it is a mystery not a comedy).

Note that the chapters are numbered and do not have headings to help you keep straight what period of time the story is set in. You have to pay attention to the names of the characters to know the period of time.

A few chapters of the next novel in the series are included in the book. Looking forward to reading it.
Meer lezen
27 mensen vonden dit nuttig
Vertaal recensie in het Nederlands

gammyjill
4,0 van 5 sterren 1944 and 2015
28 mei 2018 - Gepubliceerd op Amazon.com
Geverifieerde aankoop
I'm not a great reader of Scandinavian mysteries as I find them, in general, mighty depressing. I like the Swedish author Leif G W Persson; his work seems to have both touches of humor and the prospect of better days to come. However, I was attracted to "The Shadow District", by Icelandic author Arnaldur Indridason, for it's interesting-sounding plot and characters. I'm glad I bought and read the book as I really enjoyed it.

Set on Iceland in a dual time plot - 1944 and the present - the book tells the story of a murder which is being investigated in both time periods. As it's now 2015, we're getting almost to the end of an author being able to write about an adult in 1944 still being around in 2015. Oh, there are still some 90 plus who are still active today, but using a person in this way is going by the wayside. In any case, one of Indridason's pair of cops investigating the murder in 1944 was still around today, though himself newly dead. The two cops in 1944, Flovent (if he had a first name, I didn't catch it) and Stefan Thordarson, are trying to find the killer of a young woman whose dead body was found outside the national theater building in Reykjavik. The city and the island-nation is flush with both American and British soldiers stationed there for the war effort, and the fraternization between soldiers and the local daughters is getting a bit out of hand. The author does a superb job of setting time and place and how both can determine societal norms. Flovent and Thordarson find dead-ends and red-herrings everywhere and the murder is not actually solved til 2015.

Arnaldur Indridason has told a fascinating story and really does bring the reader back in time and place to 1940's Reykjavik. He has another in the series coming out soon and I'm looking forward to reading it.
Meer lezen
4 mensen vonden dit nuttig
Vertaal recensie in het Nederlands

doc peterson
5,0 van 5 sterren "It's not too late ... For the truth to come out"
20 november 2017 - Gepubliceerd op Amazon.com
Geverifieerde aankoop
After seven Inspector Erlendur mysteries (Jar City: A Reykjavi­k Thriller,Silence of the Grave (Reykjavik Murder Mysteries, No. 2),Voices (Detective Erlendur) ...) Indridason is developing a new story line with new characters. Perhaps this is just as well, as the previous stories had just about run their course. As with his previous work, Indridason ties past and present together in a captivating and taught thriller.

The story alternates between an investigation in 1944 around murder of a young Icelandic girl (and another missing girl), and the murder in 2017 of a retired police detective involved in the earlier investigation. As the story unfolds, the crime's details and eventually the "whodunnit" are arrived at, both ends towards the middle. It is a unique and unusual way of detailing a crime mystery which was refreshing and wholly enjoyable.

In addition to a first-rate story, Indridason creates a sense of mood, time and especially place in all his works: Iceland itself (the people, the culture, the food) play as much a part in the setting of the story as the site of the murders and interrogation rooms do. That Indridison left no loose ends (in an otherwise complex series of crimes) is also commendable. I look forward to more by the author.
Meer lezen
4 mensen vonden dit nuttig
Vertaal recensie in het Nederlands

Gorilichis
5,0 van 5 sterren A master!
8 november 2017 - Gepubliceerd op Amazon.com
Geverifieerde aankoop
Indridason is one of the best. I was sad to see his Erlendur novels presumably come to a close, so it's great news to hear that he's started a new series of Wartime Mysteries. And it is an excellent beginning. Two parallel storylines follow what seem to be unrelated police investigations. One, during World War II, looking into the murder of a young woman. The other, in the present, after a nonagenarian seems to have been murdered in his sleep. It is no spoiler to say that both stories will converge at some point, but how? And only a great writer would make them fit in so smoothly. The historical part of the novel is obviously well researched and it reads like watching a post-war movie. The stress caused to Icelanders not only by the War but by the American soldiers stationed there and who were sometimes seen as invaders has been shown in other novels, but none has made it look so good.
I chose to read this book and all opinions in this review are my own and completely unbiased. Thank you, NetGalley/St. Martin's Press!
Meer lezen
3 mensen vonden dit nuttig
Vertaal recensie in het Nederlands
Ga naar Amazon.com om alle 89 recensies te bekijken 4,0 van 5 sterren
Terug naar boven
Over ons
Verkoop bij ons
We helpen je graag
© 1996-2020, Amazon.com, Inc. en dochterondernemingen