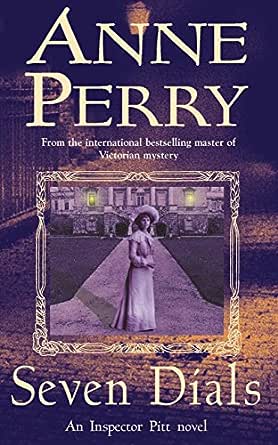 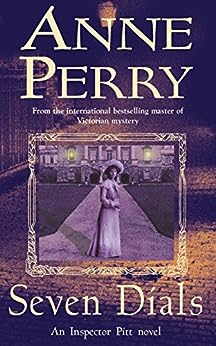 "Intricately layered . . . The visual panorama is voluptuous to behold."--The New York Times Book Review "Perry's as good as it gets. . . . The final courtroom scene produces more victims and left me breathless."--Providence Journal "Captivating . . . offers an added dollop of historical interest, immersing both Pitt and the reader in the intrigue and seething atmosphere of Egypt."--Spartanburg Herald-Journal "One of the best [novels] that Perry has written."--The Historical Novels Review

The closer he travels towards the truth, the higher the stakes become...

Seven Dials is the twenty-third instalment of Anne Perry's mystery series featuring the intrepid Thomas Pitt, as he delves deeper into the corruption of Victorian society. Perfect for fans of C. J. Sansom and Sarah Perry.

'Offering an interesting slant on the grandeur of Britain's Empire, this novel will please fans of the series, especially those who enjoy the teamwork of Mr and Mrs Pitt' - Scottish Sunday Herald

Early one morning, Thomas Pitt is summoned to the offices of Victor Narraway, head of the Secret Service in Queen Victoria's vast empire. An ex-army officer and promising young diplomat has been shot at Eden Lodge, home of the Egyptian mistress of a senior cabinet minister, Saville Ryerson, and the prime suspect is the woman herself. When Pitt visits the scene of the murder, however, he finds that some things don't add up. Why did the Egyptian woman have a gun, and if she needed protection, from whom? Is her lover lying to protect her, or himself? When the Egyptian Ambassador puts in a call to Prime Minister Gladstone, it seems that a major diplomatic row is brewing.

Meanwhile Charlotte Pitt is more concerned about her husband's safety. Thomas is convinced that Narraway knows more about this case than he claims, and Charlotte fears that he could be involved with the Inner Circle, the secret organisation that destroyed Pitt's career in the Metropolitan Police and very nearly cost him his life. Can Pitt tread the tense diplomatic tightrope between protecting justice, the security of his country, and the safety of his family?

What readers are saying about Anne Perry:

Sheila Berry
4,0 van 5 sterren PTSD in Victorian England
1 oktober 2015 - Gepubliceerd op Amazon.com
Geverifieerde aankoop
I became interested in reading Anne Perry's fiction after I read "Anne Perry and the Murder of the Century." In 1954, Ms. Perry, then Juliet Hulme, and her best friend, Pauline Parker, bludgeoned Pauline's mother to death. It seems to me that a person doesn't commit a gruesome, hands-on murder and be unaffected by it, regardless of the killer's youth at the time of the crime. In "Seven Dials," Ms. Perry closely examines post-traumatic stress syndrome against the backdrop of Alexandria, Egypt (1882) and the ongoing suffering of British military veterans a decade later. As a writer myself, I know that our own experiences color and inform what is written, and I am sure this author draws on that long-ago violence. I have begun reading "A Breach of Promise" and find PTSD again an important theme, this time affecting characters thrown into the worst of wartime butchery in the Indian Rebellion of 1857 and in the Crimean War (1853 to 1856). In both books, Ms. Perry draws very effectively on her own experiences to warn others of the heavy burden carried by participants, whether for a "good cause" steeped in patriotism or plain murder.
Meer lezen
Vertaal recensie in het Nederlands

LOgalfromOR
5,0 van 5 sterren Bravo to Perry!
15 december 2016 - Gepubliceerd op Amazon.com
Geverifieerde aankoop
Just when you think it can't get any better, along comes Anne Perry's Seven Dials. The unfolding story and plot(s) kept me from putting this book down. It is masterfully intertwined with Victorian England and Alexandria, Egypt and a who dunnit murder and mystery, with a thickening plot that could undermine British and Egyptian peace and stability. A must read for all Ann Perry fans!
Meer lezen
Een iemand vond dit nuttig
Vertaal recensie in het Nederlands

LCJ
5,0 van 5 sterren Wonderful
25 november 2015 - Gepubliceerd op Amazon.com
Geverifieerde aankoop
Another excellent Charlotte and William Pitt Victorian mystery. Pitt has joined Special Branch and is sent to Egypt to uncover facts that may help exonerate a junior cabinet minister of murder. Perry's style is rich and evocative. You can smell Seven Dials and hear the gentle lapping of the Nile. If you're a fan of Perry or her Pitt novels, this one won't disappoint. If you've never read her, start at the beginning of the series and enjoy.
Meer lezen
Een iemand vond dit nuttig
Vertaal recensie in het Nederlands

JAC
5,0 van 5 sterren Incredible mystery!
17 februari 2018 - Gepubliceerd op Amazon.com
Geverifieerde aankoop
Another one of the better novels in this series! There were several times when I though it was about to become a tedious tale, but instead, quickly advanced to maintain the momentum of Perry's expected style and brilliance!
Meer lezen
Vertaal recensie in het Nederlands