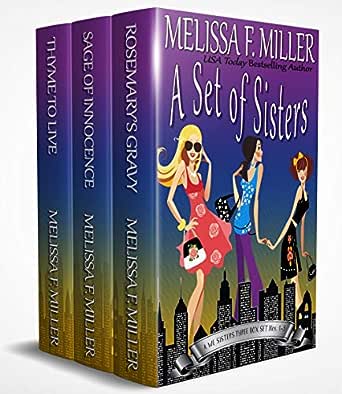 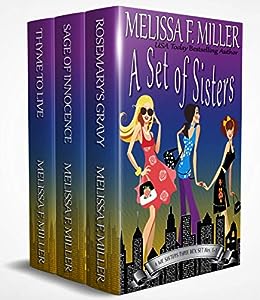 But when her miserable boss dies under suspicious circumstances, she's the number one suspect. To save her reputation and stay out of prison, Rosemary has to find the real murderer. There's no shortage of suspects, includes a womanizing race car driver; a powerful music producer; Hollywood's hottest leading man; and, oh yeah, Felix, the dead woman's stepson--which gets a bit awkward when Rosemary starts dating him.

Things go from bad to worse after a romantic dinner with Felix ends in food poisoning. Rosemary finds herself unattached, unemployed, and once again on the wrong side of the LAPD.

She knows how to salvage an oversalted sauce, but can she salvage the disaster that is her life?

Sage Field loves being a nanny for the children of a PGA golfer. But when he's implicated in the murder of a rival golfer and loses his endorsement contracts, the family's going to have to cut costs--and Sage's job is on the chopping block.

Sage convinces Roman, his caddy, to help her clear their boss's name and keep their jobs. They unearth a secret that's been hidden for a quarter of a century, discover a box of cash, and stumble onto a blackmail scheme. In the process, Sage discovers that Roman's been keeping some secrets of his own.

Sage and Roman will be lucky to save their lives, let alone their jobs.

Yoga/Pilates instructor Thyme Field's tender heart gets her in trouble all the time--garden-variety trouble like adopting stray animals or volunteering to take the overnight shift at a telethon. But this time, she's in way over her head.


When her client's nanny disappears, Thyme gets suckered into helping Victor, the missing woman's brother, search for her. Victor and Thyme stumble onto evidence that suggests she's been murdered. But nothing's as it seems, and Victor's holding back information.

As they hunt for Victor's missing sister, they're being hunted themselves; and every step closer to the truth brings them another step closer to danger.

Once you catch your breath and stop laughing, you'll fall in love with the Field sisters!

LisaD1l
4,0 van 5 sterren The three sisters box set
5 februari 2019 - Gepubliceerd op Amazon.com
Geverifieerde aankoop
The three sisters are young and all of them play detective , Rosemary because she was accused of murder, Sage because she wanted to keep her job and Thyme, because she took a liking to the brother of a missing nanny that worked for one of her physical therapy clients. All 3 books are well written and kept my interest until the end.
Meer lezen
48 mensen vonden dit nuttig
Vertaal recensie in het Nederlands

LS
3,0 van 5 sterren Ok
28 september 2019 - Gepubliceerd op Amazon.com
Geverifieerde aankoop
I enjoyed the storyline, and thought from the reviews that it was going to be a clean and easy read. However, A few unnecessary passages of crude vulgarity ruined it for me. I won’t be reading any more in the series. Too bad, because those brief passages didn’t add to the story at all and could have been eliminated entirely without being missed. I was disappointed in this “cozy” series.
Meer lezen
11 mensen vonden dit nuttig
Vertaal recensie in het Nederlands

Kindle Customer
5,0 van 5 sterren Loved these books! Clean romance
6 september 2019 - Gepubliceerd op Amazon.com
Geverifieerde aankoop
I truly enjoyed these books! Lots of adventure, laughs and surprises. The endings are unexpected. I did not notice errors and typos so the editing was good as were the plots, which moved along at a good pace. Each book can stand alone but they are even better as a series. I highly recommend them.
Meer lezen
10 mensen vonden dit nuttig
Vertaal recensie in het Nederlands

Ilona Nurmela
5,0 van 5 sterren 3 tales of 3 sisterswho find love while sleuthing
28 november 2019 - Gepubliceerd op Amazon.com
Geverifieerde aankoop
I loved this box set and reading about the adventures of Rosemary, Sage and Thyme. The books cracked me up as much as Jenny Crusie’s books do. Besides the cool names I loved the sisters’ attitude. When their hippie parents end up in a financial pickle and escape, all 3 sisters abandon their dream jobs and get more highly paying ones - a vegan chef in California, a nanny (oops, sorry, parenting consultant) in Mid-West and a yogalates instructor in NYC. When a murder happens (or 3 as it’s 3 books), it seems all three sisters have a penchant for the crazy adventure of sleuthing or it may well be that they are all helpful souls. Granted, Rosemary and Sage are trying to save their jobs to bail out the awol parental unit, but Thyme definitely wears her heart on her sleeve and helps because she really wants to. It’s a fun read and blooming romance is definitely on the cards. Rosemary could potentially even be a fountain of advice for novice daters. Definitely recommend!
Meer lezen
Een iemand vond dit nuttig
Vertaal recensie in het Nederlands

Siawilin
5,0 van 5 sterren How can three young women find their own individual murder mysteries?
4 september 2019 - Gepubliceerd op Amazon.com
Geverifieerde aankoop
Okay, for three sisters, living far apart, to individually get themselves involved with a murder, hooked up with a major player in the mystery, and help solve it is beyond belief. But then, I don't read stories that sound like real life. I read for humor (and it's available in these books), mystery (and that, too, is readily available), and I don't mind some romance, as long as it is cleanly presented and not the heart of the story. Don't miss the complications each of these gals get herself into, because you'd miss an entertaining evening of reading.
Meer lezen
2 mensen vonden dit nuttig
Vertaal recensie in het Nederlands
Ga naar Amazon.com om alle 131 recensies te bekijken 4,4 van 5 sterren
Terug naar boven
Over ons
Verkoop bij ons
We helpen je graag
© 1996-2020, Amazon.com, Inc. en dochterondernemingen