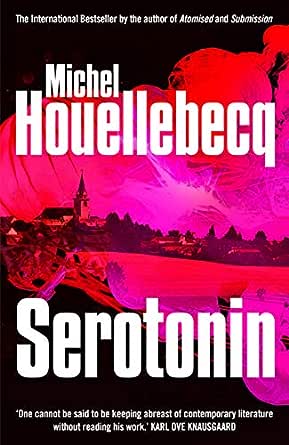 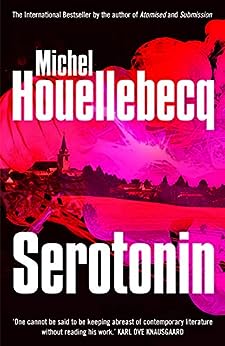 "The chemical serotonin famously produces feelings of happiness and well-being in humans--not, on the whole, something that can be said of the work of Michel Houellebecq, France's most successful literary export. Sure enough, despite its title, his latest novel is another spectacularly pessimistic meditation on the simultaneous decline of a male narrator and of western civilisation in general. Not many readers will necessarily embrace Houellebecq's world view... That, I would firmly suggest, is beside the point." --James Walton, The Times

"[Serotonin] is engrossing; it is cartoonishly violent; it is profane; it is perverse . . . It is cloaked in the garment of melancholy that puts one in mind of walking for hours in a drenched hoodie after an autumn downpour." --Christian Lorentzen, BookForum

"From the opening of Serotonin it is clear that we are in safe Houellebecqian hands . . . Houellebecq writes with such facility and humour that it can look easy. Yet how many other novelists can make you moan, laugh and keep reading like he does? He deserves his reputation as the novelist who most understands our age, most reviles it, and may well come to represent it best." --Douglas Murray, The Spectator

"This most prescient of novelists--who foresaw Islamist terror in holiday resorts in Muslim countries in Platform (2001), and envisaged Islamic government in France in Submission (2015), just before the Charlie Hebdo attacks--is addressing directly the discontents of rural France underpinning the Gilets Jaunes movement. No novel has been more pertinent this year . . . Houellebecq has always been shamelessly clear about love and sex, and the chances of any long-lived happiness in a society in which youth and desirability are traded in a free market." --David Sexton, The Evening Standard

"Any new book by Houellebecq is guaranteed to make waves, and Serotonin is no exception . . . A bleak, uncompromising novel. But it also feels like an important one, asking some necessary questions in characteristically mordant fashion." --Max Davidson, The Mail on Sunday

"Serotonin challenges its readers to soften their hearts toward those among us who are refused official pity -- the sorts of people, dairy farmers, gilets jaunes, and lonely white quadragenarian men included, who seem less likely to evoke compassion in the present political climate. Like all of Houellebecq's work, Serotonin is, at times, hilarious, sexually graphic, and shockingly irreverent. But it is also a novel of moral seriousness, daring us to increase our compassion in proportion to the seeming loathsomeness of those to whom it is owed." --Louis Betty, Los Angeles Review of Books

THE MOST IMPORTANT FRENCH BOOK OF THE YEAR
___________________
'One cannot be said to be keeping abreast of contemporary literature without reading Houellebecq's work.' Karl Ove Knausgaard, New York Times

Dissatisfied and discontent, Florent-Claude Labrouste feels he is dying of sadness. His young girlfriend hates him and his career as an engineer at the Ministry of Agriculture is pretty much over. His only relief comes in the form of a pill – white, oval, small. Recently released for public consumption, Captorix is a new brand of anti-depressant which works by altering the brain’s release of serotonin.

Armed with this new drug, Labrouste decides to abandon his life in Paris and return to the Normandy countryside where he used to work promoting regional cheeses, and where he had once been in love. But instead of happiness, he finds a rural community devastated by globalisation and European agricultural policies, and local farmers longing, like Labrouste himself, for an impossible return to what they remember as the golden age.

Written by one of the most provocative and prophetic novelists of his generation, Serotonin is at once a devastating story of solitude, longing and individual suffering, and a powerful criticism of modern life.

At a hotel in Tokyo last August I met a middle aged Dutch man. We spoke briefly about his trip, and the topic of Houellebecq came up. He highly recommended the newest book, called Serotonin. I bought it on pre-order.

It arrived today and I read it in one sitting. Of course he--a journalist running away from his wife and kids for a few weeks--would recommend this book. The plot is about a similarly middle aged Frenchman, who runs away from his distant Japanese girlfriend and embarks on a serious of reflections on his life. As usual with Houellebecq, these often involve the grotesque and the unspeakable, topics and ideas deemed undiscussable or incorrect in much of the contemporary social universe.

The reflections sometimes veer toward awkward reunions, as with his actor girlfriend who'd become a miserable alcoholic. Other times they veered philosophical, with his ideas on Love and Youth. And still other times they approach the psychotic, with the stalking of his final love and her young son. But all are grounded in his past fantasies, and his perceived failures to achieve that most ancient of goals, happiness.

Like in his previous work, Submission, Houellebecq engages in the political. The protagonist visits his sole male friend, a down-on-his-luck nobleman turned farmer, and witnesses a violent protest, farmers against riot police, ending in his friends picturesque suicide. But unlike Submission, the political only plays a small role, only hinting at the social frame in which all the protagonist's drama plays out.

Ultimately the book is a meditation on the rootlessness, alienation, and loneliness of the modern man (to use Hannah Arendt's terminology). The protagonist's reflections on relationships reveal the tension between individual desires in life and collective cultural ideas on how to live. The tensions of love vs work, now vs future. Note that, over the course of the protagonist's observations, not one of his former friends or lovers are happy or satisfied with their life circumstances. Within the book's world, Man's capacity for action itself seems to have diminished to the capacity for mere indulgence (all meals and hotels are described with detail and Yelp-esque critique). As Houellebecq says, "to use the terminology of that Austrian clown," the West has regressed to the oral stage.

The title of the book, Serotonin, refers to the protagonist's use of a novel serotonergic antidepressant. As with present day SSRIs, this kills his libido, and flattens out the emotional peaks and valleys that accompany life's flows. Anyone who's taken these substances for a period will likely be able to relate to the themes of the book, at least in some small capacity. And those who haven't? I cannot say.
Meer lezen
23 mensen vonden dit nuttig
Vertaal recensie in het Nederlands

Aran Joseph Canes
4,0 van 5 sterren Despicable Me
20 november 2019 - Gepubliceerd op Amazon.com
Geverifieerde aankoop
Serotonin is an all out assault on life in contemporary Europe. Sexually obsessed but with no true love, bureaucracies replacing any sense of communities, individuals seeking to maximize their happiness with no sense of humanity or basic empathy...all fueled by the use of psychotropic medication to keep people going. In the background is the glories of Europe’s cultural heritage—now wasted on a mostly despicable and ungrateful people.

The protagonist could be a character from David Foster Wallace’s Interviews with Hideous Men. Speaking in foul, objectivizing language about women and their bodies he is meant to offend. Moreover, he has almost no redeeming qualities. Seeing that his dream of a life of endless possibilities with a woman he loves is dead, he drifts down a path of decay and dissolution.

That said, there isn’t much of a real plot to Serotonin. The fascination is with a well-drawn character who bears more than a passing resemblance to the protagonists of Camus’ the Stranger and Dosteovsky’s Notes from the Underground.

If you like European literature, are critical of what passes for life in contemporary Europe and are not offended by the coarse objectivization of the female body you will probably enjoy Serotonin. As for me, while the protagonist will stay in my memory, I do not find the contemporary West as bleak a place as Houellebecq. I wonder if Houellebecq lived in a third world country whether he would have the same sneering attitude towards contemporary Europe. But maybe that is just his point. With all Europe’s material wealth, all it can come up with is this?
Meer lezen
15 mensen vonden dit nuttig
Vertaal recensie in het Nederlands

Book Lover
5,0 van 5 sterren Good Book, Could Use a Better Translation
26 november 2019 - Gepubliceerd op Amazon.com
Geverifieerde aankoop
I always enjoy Houellebeq's take on the state of humanity, dude lit if you like, always top notch writing, if repetitive of a world-view that may not be yours. Lots of explicit sex, cynicism, but also tenderness. After finishing Serotonin, I ordered his other books I hadn't previously read, and this is really a review of the translations by an American reader. Do we need 'ass' consistently rendered as 'arse', probably 'cul' in the French original, though I didn't check? Doesn't FSG (the American publisher) have an auto-correct button for this kind of thing. Reading now 'The Possibility of an Island', on the whole a better book, the narrator refers often to his member as his 'sex', probably a lazy translation of the identical French word that in my lifetime I've never heard used in English. What's wrong with cock or dick, or pecker if you prefer.
Meer lezen
6 mensen vonden dit nuttig
Vertaal recensie in het Nederlands