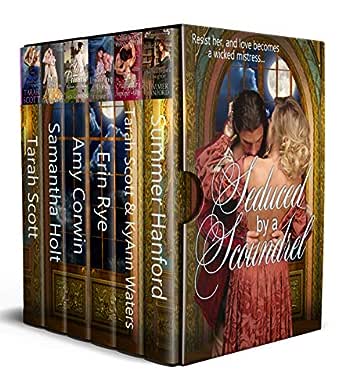 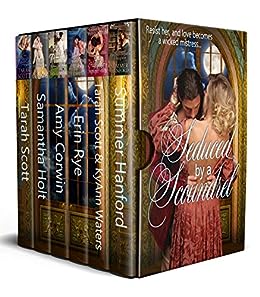 THE HIGHLANDER'S IMPROPER WIFE
A proper young lady should never attend a Masque...Aphrodite is no lady.

Betrothal to the callous Lord Blackhall painted a future devoid of love. Upon his death, Lady Caroline Wilmont is promised to the younger brother. Caroline refuses to allow her first taste of desire to be at the hands of a man who would rather have any woman but her.

Taran Robertson, Viscount of Blackhall, despises his obligation to marry the Sassenach heiress. As a last foray before his wedding, he attends a masque. However, the spirited vixen he meets and seduces has secrets...secrets that just may reveal he's to have an improper wife.

THE ARCHAEOLOGIST'S DAUGHTER
Only a man with secrets can save her...

Lanora cares nothing for love, marriage, dances or gowns. She cares about people and family. When the rakish Lord William courts her, Lenora sets out to discover what dark secrets motivate him. If she doesn't learn the truth in time, those she loves could suffer a lifetime of hardship.

LILITH AND THE STABLEHAND
Love is worth breaking rank for...

After years of dreaming of her debut, Lilith finally enters into Society. However, Society was not ready for Lady Lilith. After stepping on too many toes, spilling wine on too many bosoms, and insulting everyone, Lilith is ready to retire from Society.

Her sister-in-law has other ideas. With a grand ball coming up, Catherine intend to give Lilith another chance to find that elusive handsome gentleman who will sweep her off her feet.

But dreams of ballrooms have lost their appeal, particularly after spending time with Harry, the stable-hand, with his rough charm and hard-working ways. Why spin around ballrooms when she could curl up against his strong chest amongst the hay bales?

THE BLUE DRAWING ROOM
Penniless and jilted, Eliza Plowman accepts a position as governess to Lord Alistair Kennedy's illegitimate children.Now Eliza faces the most dangerous foe a woman can face: a charming rogue. The danger is not only to her heart, however, but to her life, as well.

In an effort to deny her son's illegitimate children, Alistair's stepmother insists on a dour governess who will break their rebellious spirits. Alistair, however, decides that the pretty lass who shows up in his stepmother's drawing room will do. If the notion offends his stepmother, all the better. If the lass is what he needs... well, a man can't ask for more.

Bespectacled and plain compared to her two sisters, Martha Stainton cherishes no expectations. After the death of their beloved father, Martha and her two sisters must become dependents of their aunt in London. But Martha doesn't want to leave--or lose her childhood friend, Quinton, now Lord Ashbourne.

On the eve of their departure, a death during a dinner party brings Quinton to Martha's door with a request to put to use her understanding of chemistry. She must analyze samples of the food served to the unfortunate guest, apparently a victim of gastric upset.

Martha grants this request. When her investigation reveals that their friendship has turned into something far deeper than a childhood bond, Martha learns that exposing a murderer and leaving behind the man she loves is more difficult than she dreamed possible.

TO TAME A HIGHLAND EARL
A man torn between two worlds. Both need him... neither wants him.

Groomed for a life amongst the English aristocracy, Lord Erroll Rushton is unexpectedly thrust back into his father's Scottish world when the Englishwoman he compromises refuses to marry him.

No gentleman breaks into a lady's bedchamber...but then, no lady sleeps with a pistol under her pillow.

Miss Eve Crenshaw will marry for love or won't marry at all. When London's most notorious rakehell breaks into Eve's bedroom in the dead of night and compromises her beyond repair, she plans a daring elopement that shocks even the earl.
click to open popover

Lilith and the Stablehand by Samantha Holt
Can the sister of a marquess find love outside her social station? Lilith had been so excited to make her debut into society and really enjoy herself. As things sometimes go though, she found herself clumsy and making a cake of herself by stepping on feet and spilling her drink in an unwelcome lady's unmentionables! Making the gossip column in a newspaper about her less than sparkling debut, she just wanted to be done with society. The only real solace she found was with Harry, the stable hand for her brother the Marquis of Thornefield. Having been around Harry and feeling as if he is a friend, she pours out her heartache and they begin to become closer. Could they possibly find love? This was a delightful story in line with the other books of this series of the Bluestocking Brides. This can be read as a standalone novella but a lot of the characters in the other books make an appearance. Love this story and the entire series as Samantha Holt pens another wonderful tale!!

The Archaeologist's Daughter by Summer Hanford
This is the first book by Summer Hanford I have read. But it definitely will not be the last! The title alone got my attention but very quickly into the story I was hooked. William Drake, future Marquess of Westlock is a rake, or is he? Pushed by his dying father to marry quickly, he meets Lady Lenora Hadley, daughter of a famous archaeologist. As much as William is a rake, Lenora is deemed an ice queen, pushing away potential suitors as quickly as they approach. Once they meet, there is an attraction, especially by William but Lenora resists due to his reputation. We find out things are not as they appear which provides an interesting mystery that is not easy to solve. This story has it all! Intrigue, suspense and a cast of characters that holds your attention and had me turning the pages as quickly as possible! I truly enjoyed this book and know you will also! Do not let this one pass you by! Great reading Summer Hanford!

One Last Promise by Amy Corwin
As often happens, Martha Stainton and her two sisters must leave their home due to the death of their father and become dependent upon their aunt in London. Martha, the plainer of the sisters, hates to leave her closest friend, Quinton, Lord Ashbourne. But Martha does have a skill chemistry and is very intelligent and logical. When Quinton asks her help in solving a mystery. she goes to his aid one last time. Quinton, was really a likable man with a lively countenance and a perfect man for Martha. Unfortunately he has worries about his own estate and not a lot of funds to manage. A great murder mystery that will engage your senses as Martha and Quinton strive to find a murderer. Will they also find each other? I love Amy's stories and this one really grabbed my attention and kept me until the last page was turned!!

so so
4,0 van 5 sterren Unusual
28 juni 2019 - Gepubliceerd op Amazon.com
Geverifieerde aankoop
The stores were good but I wasn't to happy about some of the language. I really don't think back then they used words that some of the authors used . I like romance stories but not the nasty wording.
Meer lezen
Vertaal recensie in het Nederlands

Kindle Customer
4,0 van 5 sterren An Uneven Collection
22 oktober 2019 - Gepubliceerd op Amazon.com
There are six stories here. Not all of them are about scoundrels and not all of them are about seduction. So I am indulging myself in nitpicking about it. Four of the stories are five stars and two of them are for stars. It is an enjoyable read.
Meer lezen
Vertaal recensie in het Nederlands

Mary Gallo
5,0 van 5 sterren I had to stop and write this review
20 januari 2019 - Gepubliceerd op Amazon.com
I had to tell you that if you buy this book, it is for the one story 'The Blue Drawing Room'. That story alone is on par with any 8.99 romance novel I have ever bought and read. Now I will return to reading the rest of the book. Please buy this book and read 'The Blue Drawing Room'. You should enjoy if.
Meer lezen
Vertaal recensie in het Nederlands