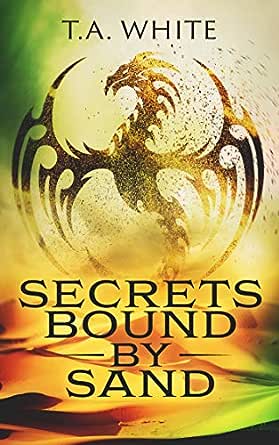 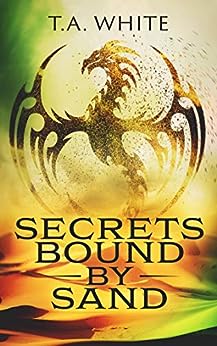 When the past forms the future, how does a woman with few memories survive?

No longer nameless or alone, Tate has put down roots in the city of Aurelia. She’s found a home, friends and a misfit family. When an assassination attempt leads to a dangerous loss of control over her dragon, Tate is sent to the farthest reaches of the empire on a mission she can’t refuse.

It isn’t long before Tate stumbles into her usual brand of trouble. Kidnapped and separated from her closest allies, Tate will have to find a way to survive old enemies and new acquaintances.

Piecing together the tattered remnants of her past might be the only thing separating her from death. Enemies long thought dead are returning and they won’t be satisfied until they have Tate’s head.

KC Rates
5,0 van 5 sterren Be prepared to re-read immediately - you don't want to miss ANYTHING!
3 juni 2019 - Gepubliceerd op Amazon.com
Geverifieerde aankoop
Secrets bound By Sand is the fourth book in the Dragon Ridden Chronicles, and while the backstory is covered, do yourself a favor and read the entire series. It's a fantastic adventure, with the rich world-building and strong, complicated female lead you should expect from TA White.

In this installment, Tate is steps up to a leadership role for Aurelia, representing the Empire on a mediation with an ally. The journey is both an opportunity to learn more about distant places and other peoples, as well as to delve further into her own mysterious past. As you'd expect from Tate, nothing happens the way it is supposed to, but everything happens the way it *needs* to.

From the opening scene where Tate's dragon Ilith wreaks havoc with the order in the Palace, to the deepening relationship between Tate and her Mentor/Tormentor Ryuu, to the revelations of Tate's personal background and the details of a new area of her world, the book is an un-put-downable ride. I found myself rereading some sections three times before moving on, both out of sheer enjoyment and to ensure I caught all of the nuances of the action.

I highly recommend anything TA White writes, but I particularly enjoyed this installment of the Dragon Ridden Chronicles. No spoilers, but it was satisfying to see aspects of both Tate's history and her "now" come together.

Disclosure- I received an ARC of this book free and clear, with a request for an honest review. AND - I bought it as well because I want to make sure TA White keeps writing! :)

Amazon Customer
5,0 van 5 sterren 4th instalment in a great series
11 juni 2019 - Gepubliceerd op Amazon.com
Geverifieerde aankoop
T.A.White is one of my favourite authors and she has not let me down with this new book in the chronicles of Dragon bound Tate. In the 4th book we are given more information about Tate's history and gain clarity about what is going on in her present. The relationship Ryu, Tate, Ilith and Rath have on an individual and collective level has developed well in this book and offers a richness to the storyline. If you haven't read any of the other books in this series do not start here. Do yourself a favour and start at the beginning and you won't regret the commitment.
I am excited to see what happens. I am sad to know the 5th book isn't available immediately. I am thrilled there will be more story and I am hopeful that all my favourite characters get a chance to shine.
Meer lezen
2 mensen vonden dit nuttig
Vertaal recensie in het Nederlands

Books devoured
5,0 van 5 sterren Be prepared for a excellent read.
6 juni 2019 - Gepubliceerd op Amazon.com
Geverifieerde aankoop
This book answered so many questions i had from the previous thre books. BUT and i do mean BUT sooo many more questions i have now. This is one heck of a roller coaster of a series or a fun house for me. So many things pop out at you and when you think you are on your last hill as you start to crest the top there are new hills to been seen. I flubbing love that in a book. This series keeps me on my toes and entertained from start to finish. The twists in this one was just wow oh wow and i cant wait for the next one.
Meer lezen
2 mensen vonden dit nuttig
Vertaal recensie in het Nederlands

Amanda
5,0 van 5 sterren Fun and engaging
28 september 2019 - Gepubliceerd op Amazon.com
Geverifieerde aankoop
So, this series s has been good, I actually re-read each book. This reminds me of a tv series where each episode concludes in a well executed manner but you still want to see what happens if will occur next. Tate and Ryu advance, Tate definitely finds out more then she any have bargained for, Night has some discoveries about himself and Dewdrop is developing into a very loyal man\child (not a child but not quite fully developed yet. I liked all four books and recommend checking them out.
Meer lezen
Een iemand vond dit nuttig
Vertaal recensie in het Nederlands

Mello Ichimaru
5,0 van 5 sterren Loved It
21 juni 2019 - Gepubliceerd op Amazon.com
Geverifieerde aankoop
This thing made my original review disappear. Suffice to say I'm still loving the series, loving Tate and Ryu with his fierce loyalty, loving Tate's family of choice and loving all of the secrets being revealed. I really wonder how much longer Tate's secrets will stay secret with crazy Christopher and Nathan running around. Not to mention that someone else is always around when some but of Tate's past is revealed. How will the empire's population react to who Tate really is?