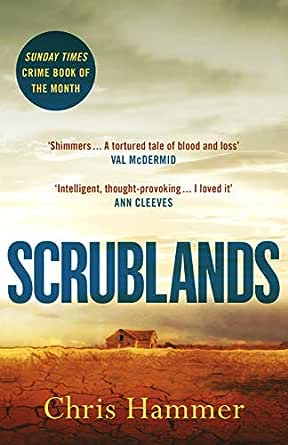 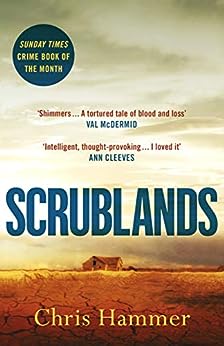 "A heatwave of a novel, scorching and powerful. This extraordinary debut, perfect for readers of the magnificent Jane Harper, seared my eyes and singed my heart. Don't miss it."--A.J. Finn, #1 New York Times bestselling author of THE WOMAN IN THE WINDOW

"Scrublands kidnapped me for 48 hours. I was hopelessly lost in the scorching Australian landscape, disoriented but completely immersed in the town and people of Riversend, as the heat crackled off the pages. I was devastated when it was time to go back to the real world. This book is a force of nature. A must-read for all crime fiction fans."--Sarah Bailey, author of THE DARK LAKE and INTO THE NIGHT

"An evocative and compelling page-turner, and a deft unravelling of small town secrets and the legacy of trauma, amid the suffocating heat of a drought-ravaged Australian scrub; I was hooked!"--Paul Howarth, author of ONLY KILLERS AND THIEVES

"A compulsively page-turning thriller where the parched interior looms as large as the characters."--The Guardian

"Scrublands is the epic novel about rural life ...that we need right now. In its concern with crime beyond the suburban fringe, it sits right up there with the late Peter Temple's Broken Shore, Garry Disher's Bitterwash Road and Jane Harper's The Dry, even as it extends their focus and reach."--Sydney Morning Herald

"Chris Hammer's powerful debut Scrublands establishes his place among the handful of thriller writers who understand the importance of setting as character, deftly weaving the story of a landscape burned dry and a town whose residents are barely hanging on with a complicated mystery that could only happen in this place in exactly the way Hammer tells it. Fresh and hypnotic, complex and layered, Scrublands' gorgeous prose swept me up and carried me toward a conclusion that was both surprising and inevitable. I loved every word. Highly recommended."--Karen Dionne, international bestselling author of THE MARSH KING'S DAUGHTER

"As evocative and haunted as the American Southwest, Chris Hammer's Australian-set Scrublands is desolate, dangerous, and combustible. A complex novel powered by a cast of characters with motives and loyalties as ever-shifting as the dry riverbed beneath them, Hammer's story catches fire from the first page."--J. Todd Scott, author of THE FAR EMPTY and HIGH WHITE SUN

"A novel's opening moments are there to rivet readers' attention; this one begins with a dazzler. . . we're hooked."--Booklist

'Shimmers ... a tortured tale of blood and loss' Val McDermid

'Stunning ... Scrublands is that rare combination, a page-turner that stays long in the memory' Sunday Times (Crime Book of the Month)

The #1 Bestselling Australian crime novel, perfect for fans of Peter May and Jane Harper

In an isolated country town ravaged by drought, a charismatic young priest opens fire on his congregation, killing five men before being shot dead himself.

A year later, journalist Martin Scarsden arrives in Riversend to write a feature on the anniversary of the tragedy. But the stories he hears from the locals don't fit with the accepted version of events.

Just as Martin believes he is making headway, a shocking discovery rocks the town. The bodies of two backpackers - missing since the time of the massacre - are found in the scrublands. The media descends on Riversend and Martin is the one in the spotlight.

Wrestling with his own demons, Martin finds himself risking everything to uncover a truth that becomes more complex with every twist. But there are powerful forces determined to stop him, and he has no idea how far they will go to make sure the town's secrets stay buried.

Mark W Geiger
3,0 van 5 sterren Bouillabaisse of a book
19 januari 2019 - Gepubliceerd op Amazon.com
Geverifieerde aankoop
Writing OK; nothing special. Several of the principal characters improbable, which is usually a deal-breaker for me. I kept reading anyway because I wanted to see how the author structured the book. I quit halfway through because one dramatic incident after another was piled on. Hence the 'bouillabaisse' title of this review - a big stew with everything in it - except that a bouillabaisse hangs together better and works. The book's setting - a little town in the Australian outback - was so full of melodramatic secrets it seems it should spontaneously combust. All this,
but no character development that I could see. Some people will like this book; I'm just not one of them. Evelyn Waugh once wrote, "For people who like that kind of thing, that's the kind of thing they will like." Yeah.
Meer lezen
14 mensen vonden dit nuttig
Vertaal recensie in het Nederlands

Leonard B.
1,0 van 5 sterren Painful
7 maart 2019 - Gepubliceerd op Amazon.com
Geverifieerde aankoop
After reading 35 pages I got the feeling that the author, a former journalist, may have thought he was writing another article, and made sure to include each and every last detail about everything on the ground, and in the air. I do not understand how anyone could stay with this book at all. The town was dead, then people were dead, and to me the story died.
Meer lezen
12 mensen vonden dit nuttig
Vertaal recensie in het Nederlands

Dave Schwinghammer
3,0 van 5 sterren Really Hot and Really Complicated
18 februari 2019 - Gepubliceerd op Amazon.com
Geverifieerde aankoop
Riversend is a small town in New South Wales. Not only has it been devastated by a terrible drought, but there's been shooting. An Anglican priest, of all people, has murdered five townspeople.

Journalist Martin Scarsden has been assigned to the story. He's been all over the world and is suffering from a form of PTS as he was locked in a trunk on the Gaza Strip during an Israeli attack. He was in there several days. You will be reminded of Dickens a bit as characters like Harley Snouch, Codger Harris, and Mandalay Blonde are introduced.

There are several other threads Martin must confront as the story progresses. Two female backpackers are found murdered in a dam at the only water source in the Scrublands. He assumes Byron Swift is responsible for those murders as well. Martin needs a big story as his career is on the skids; the whole continent is spellbound by this one.

At one point he follows the town drunk into a rundown out-of-business hotel; it's the aforementioned Harley Snouch; Mandalay, the beautiful book store owner, tells Martin he's her father, and that he raped her mother and he's been watching her from across the street. Snouch says she looks just like her diseased mother.

Chris Hammer, the author, spends a lot of time describing how hot it is in Riversend, sometimes at the expense of moving the story ahead. Eventually he does. Swift is an imposter; he has a connection with a motor cycle gang that sells marijuana, but he also sends money to an orphanage in Afghanistan.

There's also a wild fire in the Scrublands. Martin and the town constable go in to save Harley Snouch who refused to evacuate. Snouch owns the land with the water source and his home is the home of somebody with money, not the dump Martin expected. Snouch ends up saving Martin and the constable rather than the other way around.

We find out who killed the two German backpackers rather early but we don't learn why an Anglican minister (and he really was one) would murder five Riversend citizens. I got the impression Hammer didn't know either as his resolution is rather clumsy and hard to believe.

I liked the atmosphere for the same reason I liked James Michener tomes, but by the time we get the answer to the main quandary, I almost lost interest. This isn't O. Henry.
Meer lezen
7 mensen vonden dit nuttig
Vertaal recensie in het Nederlands

judyludy
2,0 van 5 sterren Good book spoilt!
13 september 2018 - Gepubliceerd op Amazon.com
Geverifieerde aankoop
I started reading this novel and found it quite gripping. However the bad language is really putting me off. I don't like hearing it and certainly don't like reading it. Will I finish this book...maybe.
Meer lezen
12 mensen vonden dit nuttig
Vertaal recensie in het Nederlands

Dion Perry
5,0 van 5 sterren A must read whodunit and classic Australiana
19 augustus 2018 - Gepubliceerd op Amazon.com
Geverifieerde aankoop
A year after a priest went on a shooting spree killing five men outside his church prior to the service, an investigative journalist returns to do a follow-up piece for the town of Riversend. He is himself traumatised by past events in the Middle East and is assuming this will be a straightforward assignment. However, soon after arriving he is drawn into a larger story. Why did the priest, a well-liked man, and pillar of the community, kill those men? What follows is an extraordinary turn of events where nothing is as it seems.

Scrublands is a must-read whodunit. A slow reveal from an in depth investigation, juxtaposed with sensationalist journalism that promises there will be lawsuits. Add romance and heartbreak along with a spoke from ASIO and you have a book that you can’t put down. If that isn’t enough, the book is also classic Australiana, which captures the essence of regional Australian culture and settings perfectly. Although a completely different style of murder mystery, I will rate Hammer alongside the literary giants Patricia Cornwell. One can only hope the author will write more fiction, but even if he doesn’t, surely there is the film adaption to look forward to. I can scarcely wait.
Meer lezen
5 mensen vonden dit nuttig
Vertaal recensie in het Nederlands
Ga naar Amazon.com om alle 88 recensies te bekijken 4,1 van 5 sterren
Terug naar boven
Over ons
Verkoop bij ons
We helpen je graag
© 1996-2020, Amazon.com, Inc. en dochterondernemingen