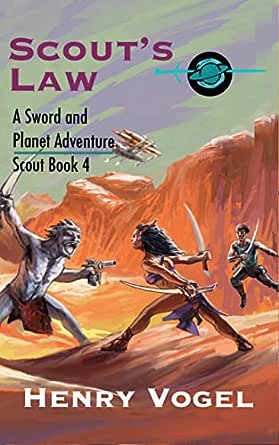 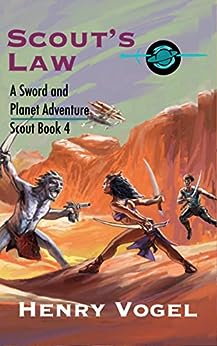 After two thousand years of isolation, the lost colony world of Aashla has re-established contact with the rest of galactic civilization. Princess Callan and her royal consort, Terran Scout David Rice, made that happen. Now, they lead a mission to ensure that Aashla's unique culture isn’t overwhelmed by the vast, technologically advanced Terran Federation.

Then a routine inspection of Federation scientific outposts unearths a mass grave. Shortly after, an unnatural storm knocks David and Callan’s airship from the sky, forcing them to confront their worst nightmare.

Someone has smuggled forbidden galactic technology onto Aashla, and the trail of murder and destruction has only just begun. Can David and Callan stop the fiends from destroying their world? Grab a copy of Scout’s Law and discover the answer!
click to open popover

Robert Shuler
4,0 van 5 sterren Scout begins training the next generation
21 januari 2017 - Gepubliceerd op Amazon.com
Geverifieerde aankoop
Vogel is back on his game with this one, after a muff at the end of the previous trilogy. I enjoyed it. Some interesting new characters are developed. I suppose eventually the action will be handed off to them like Burroughs did. The motivation and continuity of the opposition kind of gets lost a bit. I suppose it is nothing that can't be fixed in a sequel.
Meer lezen
Vertaal recensie in het Nederlands

Kindle Customer
5,0 van 5 sterren Scout's Law
20 december 2017 - Gepubliceerd op Amazon.com
Geverifieerde aankoop
I read every book in the series. They kept me fully engrossed with the action and enchanting characters. Henry Vogel's books are for all ages, can't wait till the next comes out.
Meer lezen
Vertaal recensie in het Nederlands

Pat Patterson
5,0 van 5 sterren A great YA adventure, but it's not childish. Buy it, read it, and give it to a kid!
6 januari 2017 - Gepubliceerd op Amazon.com
I obtained this book through the lovely and delectable Kindle Unlimited program.
You don't HAVE to have read the first three books in the series to enjoy this installment, but it will give you some background. Callan is the Princess, David is the Scout, her consort, and there is a bad guy from the previous books who makes an appearance.
It's a straight up adventure story, with a lot of dashing about and sword-waving, and the good guys win (with some losses) and the bad guys lose (with some threads left for future badness). And that's EXACTLY the kind of story I loved when I was a kid, and still love today.
Besides the swordplay, there is a bit of smooching. It's entirely appropriate smooching for the most part, and the one scene where the smooching is NOT appropriate, it's clearly shown that the male smoocher is a creep who is trying to take advantage of the female smoochee. It's a good morality tale, and one I would not hesitate to allow my 10 year old Alicia Ann to read. In fact, I might have her read it just to bring home the point that a guy who gets even a little bit rough is someone to reject.
Other than the technology-enhanced actions of the individuals with Boost devices implanted, nobody acts like a superhero. In fact, that's one of the great messages a young person can take away from this book: that ordinary people can do astounding things, just by doing their duty, and that doesn't make them an alien life-form from Krypton.