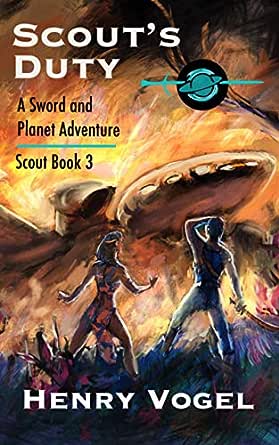 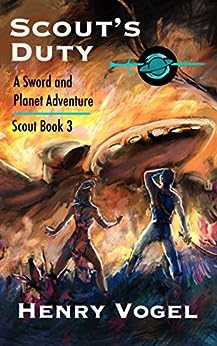 After Terran Scout David Rice pledges his life and sword to Princess Callan and Aashla, his adopted home world, he believes he'll never see another Terran again. Then, weapons fire lights the night sky as a starship tries to blast its way through Aashla's deadly planetary ring. When the attempt fails, David and Callan rush to the crash site—but they aren’t the only ones who witnessed the disaster. At the crash site, they find their bitter rival and Callan’s former fiancé, Prince Rupor, already on the scene...

On a world of swords and steam-powered airships, even a wrecked starship can overthrow the balance of power!

Can Rupor and our heroes put aside their animosity long enough to rescue the spaceship’s crew? Pick up a copy of Scout’s Duty and learn the answer!

Years ago, Terran Scout David Rice crash-landed on the lost colony world of Aashla, where he rescued and fell in love with the beautiful Princess Callan. Pledging his life and sword to Callan and his adopted home world, David thought he'd never see another Terran again-until the night the sky was lit by weapons fire, as another starship tried and failed to blast its way through Aashla's deadly planetary ring. Now, rushing to the crash site, David and Callan find they're too late, as their bitter rival, Prince Rupor, has gotten there first... For on a world of swords and airships, even a wrecked starship can overthrow the balance of power! SCOUT'S DUTY is an exciting modern homage to the classic tales of planetary romance made famous by writers such as Edgar Rice Burroughs and Leigh Brackett. If you like your heroes unabashedly heroic, your heroines feisty and true, and your plots filled with dangers and twists at every turn, you'll enjoy SCOUT'S DUTY.
Alle bekijken
click to open popover

Randall Richmond
5,0 van 5 sterren A Planetary Romance Master
27 mei 2016 - Gepubliceerd op Amazon.com
Geverifieerde aankoop
This novel is dedicated to the memories of Edgar Rice Burroughs and Leigh Brackett. Back when Ace books and shortly thereafter Ballantine Books started republishing ERB's novels I was a teenager just beginning my life long love of science fiction and adventure books. I picked up Burroughs' A FIGHTING MAN OF MARS and became hooked. I read every Burroughs book I could find.

Fortunately Henry Vogel has not yet written the seventy odd novels that Burroughs produced, because if he had I would not be reading anything else this year not written by Vogel. What a treasure!

Like Burroughs Vogel doesn't seem to be capable of writing a boring word. Every one of his books is a gem, this one included. I'm not going to say that I like Vogel's novels better than ERB's, but I read those books four decades ago, and for my money Vogel currently writes the most entertaining stories in the genre! Sure hope he keeps going for seventy odd additional books.

Mike
5,0 van 5 sterren Well Done!
3 januari 2016 - Gepubliceerd op Amazon.com
Geverifieerde aankoop
Along with the first two books of his series, Henry has made this into a fun, easy read. This is an excellent introductory SF book for a young reader, but complex enough to entertain an adult. It reminds me in some ways of Burrough's Barsoom novels. Finished all three books over the weekend, and will be looking for more. Well done!
Meer lezen
2 mensen vonden dit nuttig
Vertaal recensie in het Nederlands