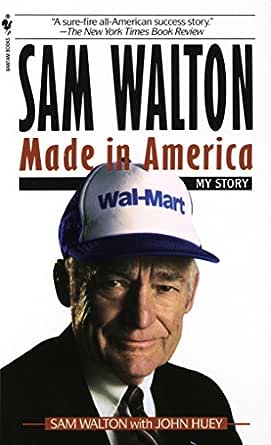 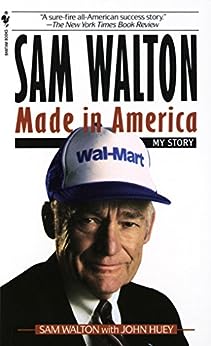 "[A] wise and inspiring autobiography--Walton tells his quietly fantastic story with conviction and makes no bones about his mistakes."
-- San Francisco Chronicle "It's a story about entrepreneurship, and risk, and hard work, and knowing where you want to go and being willing to do what it takes to get there. And it's a story about believing in your idea even when maybe some other folks don't, and about sticking to your guns."
-- Sam Walton "Here is an extraordinary success story about a man whose empire was built not with smoke and mirrors, but with good old-fashioned elbow grease."
-- Detroit Free Press "A sure-fire all-American success story."
-- The New York Times Book Review

Meet a genuine American folk hero cut from the homespun cloth of America's heartland: Sam Walton, who parlayed a single dime store in a hardscrabble cotton town into Wal-Mart, the largest retailer in the world.  The undisputed merchant king of the late twentieth century, Sam never lost the common touch.  Here, finally, inimitable words.  Genuinely modest, but always sure if his ambitions and achievements.  Sam shares his thinking in a candid, straight-from-the-shoulder style.

In a story rich with anecdotes and the "rules of the road" of both Main Street and Wall Street, Sam Walton chronicles the inspiration, heart, and optimism that propelled him to lasso the American Dream.

Mikhail Baynes
5,0 van 5 sterren Sam Walton: Made In America Review
8 oktober 2015 - Gepubliceerd op Amazon.com
Indeling: Kindle-editieGeverifieerde aankoop
Sam Walton was truly a testimony of the American Dream. What a story! What an inspiration!

Sam's story of Wal-Mart tells of passion and purpose. What's possible if you believe in putting the customer first, showing love and care for your partners and your associates, and giving back to the community that enables free enterprise. One lesson most important of all is to persist. Also as Sam says, "To succeed in this world, you have to change all the time."

This book also illustrates the journey that faces all entrepreneurs of overcoming adversity and obstacles. It would give you inspiration to succeed in your venture.

This is a gem of a book. Thank you, Sam for sharing your remarkable story. Invest in this book, you will be glad you did. The book you don't read won't help.

Jack R. Bosch
3,0 van 5 sterren Informative, but....
20 juni 2019 - Gepubliceerd op Amazon.com
Geverifieerde aankoop
Too much repetition. It is obvious to me that this writing was padded to make it the standard length book. Nothing to do with the book itself, but I really think that old Sam was a mean SOB who tried to hide that characteristic in a rapacious rancor of the customer, the customer, the customer to ad nauseam. I would not want to work for the man who bordered on dictatorship.
Meer lezen
4 mensen vonden dit nuttig
Vertaal recensie in het Nederlands

Core
5,0 van 5 sterren Phenominal
13 augustus 2015 - Gepubliceerd op Amazon.com
Geverifieerde aankoop
If your wanting to open your own merchandising store, and your curious how the logistics of it, might work.. this book is not really for you.
Now, if your wanting to see what it takes to succeed and gain customers, and see how such an amazing thing like walmart has happened.. well this books may be for you.

If your just curious about the founder behind walmart, and you get a kick out of adventure.. then check this out!

I bought this book on a whim, up to this point I had never concerned myself with the "autobiography" type categories... but after buying this and reading, and learning how this man made it.. well it's changed my attitude a bit.

Well worth a read.

This is just a side, but maybe Elon Musk will repeat this success but with space travel and battery technology? Lets hope so.
Meer lezen
11 mensen vonden dit nuttig
Vertaal recensie in het Nederlands

Kindle Customer
5,0 van 5 sterren As unassuming -and wise- as its author, Sam Walton
10 juni 2016 - Gepubliceerd op Amazon.com
Indeling: Kindle-editieGeverifieerde aankoop
"Made in America" is as unassuming as its author, Sam Walton. It is written in very colloquial plain "American" English, so you can almost image Mr. Walton, in his death bed, dictating this little book of wisdom. It is filled with many pearls of wisdom, on how to be a small business owner, on never giving up and always trying new things. I am surprised more people don't read this little known book, given that Sam Walton has to go down in history (maybe Bill Gates?) as the most successful entrepreneur in American history. The book is not filled with technical lexicon found in MBA programs. It is a non nonsense book, told from Walton's perspective. I recommend this book.
Meer lezen
7 mensen vonden dit nuttig
Vertaal recensie in het Nederlands

Oscar Fabra
5,0 van 5 sterren The MOST ESSENTIAL business book ever
23 augustus 2019 - Gepubliceerd op Amazon.com
Indeling: Kindle-editieGeverifieerde aankoop
Sam Walton is considered by many as the best entrepreneur of the twentieth century. His life is nothing short of amazing. His business savvy is quite unusual. His life accomplishments are outstanding from any point of view.

What is most remarkable about this book is the sheer amount of proven business tips that it unveils. You are guaranteed to receive your share of practical wisdom from Sam Walton himself and some of his friends. When the most successful entrepreneur of the last century shares his thoughts you should listen.

I really liked this book, especially because I identify with most of Mr. Walton's life philosophies and approach to business. I became a fan of Mr. Walton after reading this book. It's the most inspirational figure I've read about (behind Jesus). This book has literally changed my life and given me clarity about many issues regarding myself and my entrepreneurial endeavors.