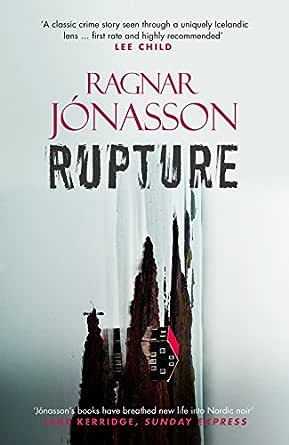 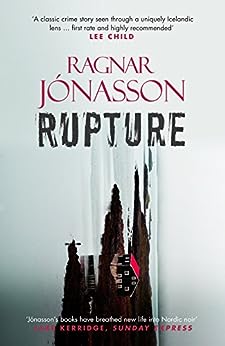 THE THIRD INSTALMENT IN THE INTERNATIONAL BESTSELLING DARK ICELAND SERIES

OVER A MILLION COPIES SOLD WORLDWIDE

With a stalker on the loose and the town of Siglufjörður in quarantine, a child goes missing, as Icelandic police officer Ari Thór Arason investigates a cold case of a mysterious death on an isolated fjord…

‘A modern take on an Agatha Christie-style mystery, as twisty as any slalom…’ Ian Rankin

1955.Two young couples move to the uninhabited, isolated fjord of Hedinsfjörður. Their stay ends abruptly when one of the women meets her death in mysterious circumstances. The case is never solved. Fifty years later an old photograph comes to light, and it becomes clear that the couples may not have been alone on the fjord after all…

In nearby Siglufjörður, young policeman Ari Thór tries to piece together what really happened that fateful night, in a town where no one wants to know, where secrets are a way of life. He’s assisted by Ísrún, a news reporter in Reykjavik, who is investigating an increasingly chilling case of her own. Things take a sinister turn when a child goes missing in broad daylight. With a stalker on the loose, and the town of Siglufjörður in quarantine, the past might just come back to haunt them.

Haunting, frightening and complex, Rupture is a dark and atmospheric thriller from one of Iceland’s foremost crime writers.

‘History and time are essential to the storyline and echo with striking vibrancy, ensuring ‘Rupture’ just throbs with dramatic intensity and is a riveting read’ LoveReading

‘Rupture is a clever, complex and haunting thriller, a fascinating study of a an already isolated community cut off from the world by a deadly illness, living in fear of both disease and an unknown stalker, and with two young people ploughing a furrow through events of the past , determined to seek out the truth. It’s a fascinating scenario and one that Jónasson exploits through three separate story strands, each slowly weaving together as the mystery unfolds and moves inexorably to a conclusion that is both unexpected and gripping’ Lancashire Post

‘RUPTURE by Ragnar Jonasson is one of those rare beasts: a convoluted plot that never once becomes complicated or unwieldy. Taking his cue from greats like Agatha Christie, Jonasson weaves a story that is full of intrigue, keeping us on our toes throughout, bringing us towards a satisfying denouement that is full of juicy – not to mention tragic – revelations’ Lucy Hay

‘A tense and convincing thriller; Jónasson is a welcome addition to the roster of Scandi authors…’ Susan Moody

The characters in this Dark Iceland series are moving right along. Ari Thór and his lady love Kristín seem to be growing up, but that is going to be tested in the future due to the actions of Ari Thór's superior officer. Speaking of superiors, Ísrún still has someone in the newsroom who would love to force her to quit, but she's having an easier time of it because she's learned a few tricks in how to deal with the situation.

Both mysteries-- the one in northern Iceland and the one in Reykjavik-- are strong stories. Ari Thór's is more deeply rooted in the past and is hampered by the fact that many of the people concerned are dead. Even more maddening are the people who want the past to remain in the past. For me, the mystery in Reykjavik affected me more. Emil's and Róbert's lives both changed when Emil's partner was attacked and left for dead. Two years later, the young woman finally dies. Emil's life is completely shattered while Róbert's has taken a dramatic turn for the better. As their story unfolds, Jónasson has us feel empathy for both men-- something that's not easy to do-- and the book is the stronger for it. After all, life is seldom simple.

As always, the weather and landscape of Iceland play a part in Rupture. Few authors are as talented as Jónasson in creating atmosphere. Combine that with strong, believable characters and a multi-layered story filled with unanswered questions and deep emotions, and you've got another winner from someone who has quickly become one of my favorite writers. I cannot recommend his books highly enough.
Meer lezen
3 mensen vonden dit nuttig
Vertaal recensie in het Nederlands

MisterTom
4,0 van 5 sterren With So Many Interesting Parallel Plots, It Could Have Been Longer!
2 februari 2019 - Gepubliceerd op Amazon.com
Geverifieerde aankoop
Having visited Iceland more than several times, I enjoy reading this DARK ICELAND series and recognizing many places where these stories take place. The chapters are short and have a day to day feel about them, which invites us into a character’s life and thought process, which I find compelling, especially with references to other books in the series (though not crucial to enjoying this story). I found myself fatigued with a self-imposed jump back and forth through seemingly unrelated narratives with almost every chapter. They can feel like short stories, which I keep hoping will eventually be connected. They are, but feel like less of a journey for any one character to get there. RUPTURE is a 4th novel that fits between the chronology of books 2-3 (NightBlind & Blackout) in the DARK ICELAND series. I hope the author continues to give life to Ari Thor, who is finding courage and purpose in his young adult life as he solves mysteries for his beautiful and mysterious Iceland.
Meer lezen
4 mensen vonden dit nuttig
Vertaal recensie in het Nederlands

Jana Olivas
5,0 van 5 sterren Dark, thrilling, moody
16 maart 2019 - Gepubliceerd op Amazon.com
Geverifieerde aankoop
This was one of my favorite books by Ragnar Jonasson. The story was so well told, it never lagged. I couldn't put this book down. The characters in the mystery were gone already but they were haunting all aspects of the events taking place in the present. I loved the story and I hated for it to end.
Meer lezen
2 mensen vonden dit nuttig
Vertaal recensie in het Nederlands

Blindal
3,0 van 5 sterren "Scandinavian (or Nordic) Crime Fiction
6 februari 2019 - Gepubliceerd op Amazon.com
Geverifieerde aankoop
I use crime fiction as an escape. One that exercises the little grey cells, to be sure, but an escape all the same. I found this to be the weakest of the series so far. I'm not ready to give up on the series because I see troubling (interesting) times ahead for Ari Thor.
Meer lezen
2 mensen vonden dit nuttig
Vertaal recensie in het Nederlands

Kindle Customer
3,0 van 5 sterren An Icelandic mystery
25 juli 2019 - Gepubliceerd op Amazon.com
Geverifieerde aankoop
This Islandic mystery was satisfying after reading Knife by Nesbo. Thor and his partner introduce the reader to a place whicquest h is not considered remote but very safe. Thor looks into an old case by request of a family member. The family did not believe a mother committed suicide. A second and current investigation leads Thor to a predator who was involved in kidnapping of a child. The reasons to lift the child are mired in.the past.
Fast read and I would recommend to a general young adult to adult audience.
Meer lezen
Vertaal recensie in het Nederlands
Ga naar Amazon.com om alle 36 recensies te bekijken 4,4 van 5 sterren
Terug naar boven
Over ons
Verkoop bij ons
We helpen je graag
© 1996-2020, Amazon.com, Inc. en dochterondernemingen