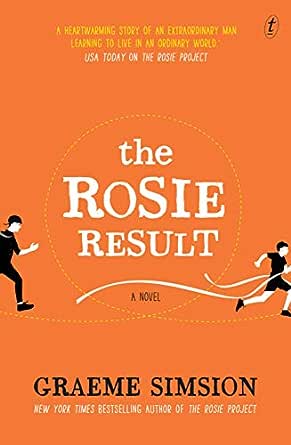 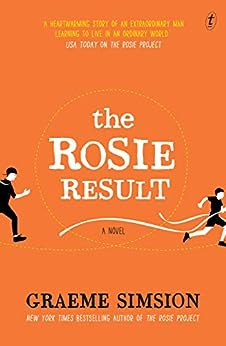 Don Tillman and Rosie Jarman are about to face their most important challenge.

Their ten-year-old son, Hudson, is struggling at school: he’s socially awkward and not fitting in. Don’s spent a lifetime trying to fit in—so who better to teach Hudson the skills he needs?

The Hudson Project will require the help of friends old and new, force Don to decide how much to guide Hudson and how much to let him be himself, and raise some significant questions about Don’s own identity.

Meanwhile, there are multiple distractions to deal with: the Genetics Lecture Outrage, Rosie’s troubles at work, estrangement from his best friend Gene…

Hilarious and thought-provoking, with a brilliant cast of characters, The Rosie Result is the triumphant final instalment of the much-loved and internationally bestselling Don Tillman trilogy.


Graeme Simsion is a Melbourne-based novelist and screenwriter. The Rosie Project and The Rosie Effect have combined global sales approaching five million copies. Graeme is also the author of the international bestsellers The Best of Adam Sharp and – co-written with his wife, Anne Buist – Two Steps Forward. His screenplay for The Rosie Project is in development with Sony Pictures, The Best of Adam Sharp is in development with Toni Collette’s Vocab Films, and the rights to Two Steps Forward have been optioned by Fox Searchlight and Ellen DeGeneres. Graeme’s latest book is the third and final Don Tillman novel, The Rosie Result.

“Don Tillman helps us believe in possibility, makes us proud to be human beings, and the bonus is this: he keeps us laughing like hell” Matthew Quick, author of The Silver Linings Playbook.

“A heartwarming story of an extraordinary man learning to live in an ordinary world.’” USA Today

"Sharp dialogue, terrific pacing, physical hijinks, slapstick, a couple to root for, and more twists than a pack of Twizzlers.” NPR.org

"Filled with humor and plenty of heart... a delightful reminder that all of us, no matter how we're wired, just want to fit in." Chicago Tribune

"One of the year's most promising and original novelists." Wall Street Journal

‘Charming, eloquent, and insightful, The Rosie Result is a triumphant conclusion to Don’s story, one that celebrates this remarkable father, husband, and friend in all his complexity and brilliance.’ Booklist (starred review)

‘Very much a charmer...A fitting end to this delightful trilogy that doesn't pull punches.’ Kirkus

The Rosie Result is the triumphant final instalment of the internationally bestselling series that began with The Rosie Project.

Until twelve years ago, geneticist Don Tillman had never had a second date. Then he developed The Wife Project and met Rosie, 'the world's most incompatible woman'. Now, having survived 4,380 days of marriage, Don's life-contentment graph, recently at its highest point, is curving downwards.

Rosie has just returned to work and is struggling with an obnoxious co-worker. Don, meanwhile, is in hot water after his latest lecture goes viral. But their real worry is their son, Hudson, who is having trouble at school: his teachers say he isn't fitting in with the other kids.

For Don, learning to be a good parent as well as a good partner will require the help of friends old and new. It will mean letting Hudson make his way in the world, and grappling with difficult truths about his own identity.

It will also mean opening a cocktail bar.

Hilarious and thought-provoking, with a brilliant cast of characters, The Rosie Result will have readers cheering for joy.

'Compulsively readable. A poignant, universal story about how best to reconcile head and heart' Observer

Butch
5,0 van 5 sterren So entertaining
6 maart 2019 - Gepubliceerd op Amazon.com
Geverifieerde aankoop
My favorite of the Rosie books, and I loved The Rosie Project. This book was funny - some times laugh out loud funny, sometimes eye-rolling funny. It was also imbued with taut writing and warmth, charm, and love. It’s thought provoking discussion of autism was engaging without being heavy or preachy and delivered with care and grace. Only vegans and anti-vaxxers need be worried - on many fronts. Well done. Now I guess we need to wait for the movie. Jennifer Lawrence was all wrong for Rosie. How about Alia Shawkat?
Meer lezen
14 mensen vonden dit nuttig
Vertaal recensie in het Nederlands

bookworm365
4,0 van 5 sterren I had no idea this book would be this GOOD!!!!
23 februari 2019 - Gepubliceerd op Amazon.com
Geverifieerde aankoop
Don, is a scientist with Aspergers and his relationship with Rosie is just wonderful. Especially considering where Don started out from, and all the hurdles he had to overcome. Seeing him now with his child, and still going strong with Rosie after 13 years made me love him even more. Personally, I love it when kids are part of a story. Even better if the kid is like Hudson, a mini Don, with all his complexities.

I’m not going to lie, I have a weakness for quirky characters.

And often that comes when characters who struggle with every day occurrences, social niceties, and an overall way of thinking differently in a world that isn’t very forgiving or tolerant.

The Rosie Result is all about Don trying to make Hudson’s life at school easier. The way he goes about is heart warming and so “Don”. Hudson, with eleven years has a mind of his own, and a very strong personality. And I loved how the author took the offerings and advice of a village to resolve it all.

Don’s problem solving as always made me grin and chuckle. He still struggles with some aspects but he has Rosie to guide him when unsure. I truly love their relationship. The outspokenness, openness, and honesty between them works wonders.

Also incredibly fascinating was the interaction between school and parents, all the small dramas and school politics, especially in regards to Autism. It was a bit eye-opening too if I’m honest. But I loved how united Don and Rosie were in all things Hudson. I could talk for hours about the way Don and Rosie made me smile whenever they played good cop and bad cop – at least their version of it.

I believe this might even be the BEST book in this series.

That’s actually pretty amazing – it’s rare that sequels surpass the first novel. But for me it’s all about the kids – they make books even better and actually bring out the best in many characters.
Meer lezen
10 mensen vonden dit nuttig
Vertaal recensie in het Nederlands

carmen
4,0 van 5 sterren Much better!
25 februari 2019 - Gepubliceerd op Amazon.com
Geverifieerde aankoop
The first big plus was that I didn’t spend the entire book wanting Rosie to...well...die. I found her insufferable in the first two books. The author managed to hit a nice stride with her character and put her where she belongs...as a SUPPORTING supporting character. I would’ve given this five stars but the first third of the book was so slow! There were also so many characters and plots that, while tied up in the end, were a bit confusing. And I came into the book having read the first two! Not to mention that Don wasn’t allowed to shine as much as I’d hoped. Otherwise, Don’s escapades-especially with the animals mating idea-had me laughing such I feared giving myself a hernia! Seriously. I laughed until I cried. I hope we’re not done with Don and the fam!!!
Meer lezen
9 mensen vonden dit nuttig
Vertaal recensie in het Nederlands

blueotter
5,0 van 5 sterren Charmingly Funny Story That Takes On Some Big Issues
2 mei 2019 - Gepubliceerd op Amazon.com
Geverifieerde aankoop
This is the third in a trilogy that starts with The Rosie Project, continues with The Rosie Effect, and finishes with this one. It features brilliant but socially inept Don Tillman, his attempts to learn how to be “normal”, and his love for the level-headed Rosie. The books are very funny, with the humor often subtly coming from Don’s misunderstanding, or failure to understand, his interactions with “normal” people.

He’s such an appealing character, unfailingly honest, with intentions we can all envy. I think of Rosie as rough and tumble; she knows how to take on the world and make it pay attention. She sees him as he really is, and is willing to take that on, too.

Giving almost any plot details about this one would be a spoiler if you haven’t read the first two. Issues of what autism is and our prejudices and misconceptions are skillfully handled. There’s an autistic activist who challenges “neurotypicals”, and our assumptions in a way that fits with the most recent developments I’m aware of.

It’s all improbable, but it’s also touching and filled with truth. The importance of love, of “muddling through”, of being open to help from friends and family, of asserting individuality and fighting for it, all play big roles in this one.

It’s a rare book that is so . . . positive in it outlook, while being willing to take on big issues. And funny. It’s charmingly funny. I wish Don and Rosie and the others were real. I wish they were here in our house right now. Five stars.
Meer lezen
4 mensen vonden dit nuttig
Vertaal recensie in het Nederlands

Zilkybaz78
5,0 van 5 sterren ROSIE BOOK 3
17 maart 2019 - Gepubliceerd op Amazon.com
Geverifieerde aankoop
An absolutely fascinating and insightful trilogy into the much disputed field of the autism spectrum. As evidenced in this last book, it seems that early intervention (and a father who had experienced the same difficulties) gave the boy a great advantage in learning social skills and yet accepting who he was as a person. The mother provided a wonderful support and back-up to both males with her own intelligence and skills in dealing with their deficiencies. My only criticism is that there was some confusion as to autism's relationship (if any) to Asperger's syndrome, which displays similar symptoms. High intelligence seems to be a feature of both conditions (inevitably in the maths/science field) and perhaps more prevalent in boys than girls? As is ADHD. Future scientists may discover why.
Meer lezen
3 mensen vonden dit nuttig
Vertaal recensie in het Nederlands
Ga naar Amazon.com om alle 226 recensies te bekijken 4,4 van 5 sterren
Terug naar boven
Over ons
Verkoop bij ons
We helpen je graag
© 1996-2020, Amazon.com, Inc. en dochterondernemingen