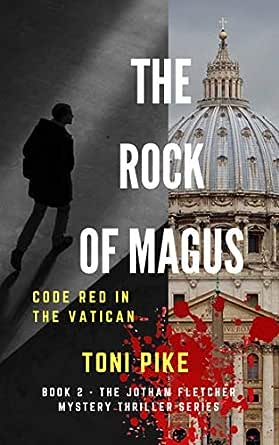 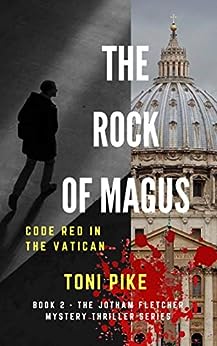 Jotham Fletcher returns in a race against time that takes him deep inside the Vatican. Cardinal Alpheus has ambitions far more sinister and explosive than anyone could imagine, and the death of Pope Linus is only the beginning.

Jotham is now a billionaire, dedicated to finding the Simonian Sect and he employs Madena, a former army officer, to help him. They rescue a televangelist in Seattle but find the photograph of a man who is soon elected as the new Pope, with Alpheus as his chief advisor.

The deadly Brotherhood re-emerges with Father Dominic at the helm. Jotham becomes the prime suspect in the murder of a cleric in Spain and the unwitting hero after a devastating event in Rome. He has a secret that he dare not reveal and is on the run from the police once again. But nothing prepares him for the final confrontation at the Pope’s summer retreat.

FEATURING: a fast-paced and gripping plot, chase sequences, murder and political intrigue in the Vatican, and a love story like no other.

Don't miss this action-packed thriller! Discover why it's Code Red in the Vatican.

There are three other books in this series - enjoy Jotham Fletcher’s continuing story.
Book 1: THE MAGUS COVENANT – The secret that will change the world
Book 3: THE MAGUS EPIPHANY – Ancient treasures and a new revelation
Book 4: HOLY SPEAR OF MAGUS – The covenant will be fulfilled

Similar to Dan Brown’s main character, Robert Langdon in The DaVinci Code, Pike’s central character, Jotham Fletcher, also possesses unequalled expertise in a particular subject, in this case, the shadowy, religious figure Simon Magus. I find it fascinating that Pike built her series around this little-known historical figure, a magician and cult leader at the time of the Apostles. Magus is mentioned in the Bible in Acts 8:9-24 as he tries to “buy” the anointing of the Holy Spirit, but was rebuked by the Apostles as a sorcerer and wicked charlatan. The heart of Pike’s adventure lies in this fictional, 21st century Simonian Sect, whose cult followers are nothing short of fanatical, according to her series.

Pike sets the scene for suspense, thrills and twists that leads readers to believe that Fletcher may not solve this mystery, as insurmountable odds stack against him and his female partner. I found the book to be a nail-biter and a page-turner!

The characters are believable, with Fletcher expressing doubt at one point, but using his shaky confidence to navigate the labyrinthine Vatican grounds as he and Madena attempt to solve the mystery. Pike’s research is extensive and written from the perspective of having visited Rome. I personally love it when authors write from their intimate knowledge of a subject and from the locations they have been.
I highly recommend this adventure series and am looking forward to book #3, The Magus Epiphany.

Sherry H
4,0 van 5 sterren Great story that needs polishing
16 augustus 2016 - Gepubliceerd op Amazon.com
Geverifieerde aankoop
I really enjoyed the story line. Although this is #2 in the series, you really don't have to read The Magus Covenant (although you should to get the full background!) Toni does a good job of referring back to the previous story without it sounding like a rehash. It had been several months since I read Magus Covenant and it was good to get the memory refreshed!

Lots of suspense and surprises. The disguises were clever and I got a kick out of Pablo, the taxi driver in Spain

My only complaint again is the lack of tightness to the story. There are too many descriptive terms that are repeated too often - hairs on the back of his neck, beads of sweat, tight fists, eyes open wide, etc., and sometimes I felt it was a little too much action or something.

Amazon Customer
5,0 van 5 sterren A sequel as good as the first.
16 augustus 2016 - Gepubliceerd op Amazon.com
Geverifieerde aankoop
When you read a sequel you usually feel that it is probably not going to be as good as the first. However Ms. Pike has pulled it off with a tight plot,filled with unexpected twists. She leaves us with the expectation of a third book. Written in an easy flowing narrative that you don't have to back and reread passages to keep up with the story line.
Meer lezen
Een iemand vond dit nuttig
Vertaal recensie in het Nederlands

MLM Luy
2,0 van 5 sterren I am not a good critic on this one
7 april 2018 - Gepubliceerd op Amazon.com
Geverifieerde aankoop
I couldn't get into it this time. I will try again as it may just have a slow start. So I am not a good critic to say if the book is a good read or not
Meer lezen
Een iemand vond dit nuttig
Vertaal recensie in het Nederlands
Ga naar Amazon.com om alle 9 recensies te bekijken 3,6 van 5 sterren
Terug naar boven
Over ons
Verkoop bij ons
We helpen je graag
© 1996-2020, Amazon.com, Inc. en dochterondernemingen