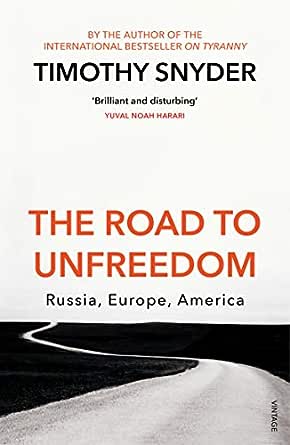 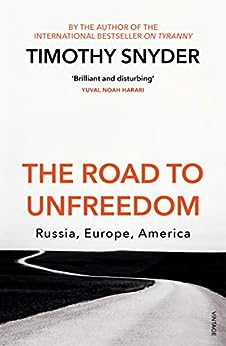 A wake-up call that aims to restore our understanding of the basis of our way of life, from the author of international bestseller On Tyranny.

‘One of the best…brisk, conceptually convincing account of democracy’s retreat in the early years of 21st century’ Guardian

The past is another country, the old saying goes. The same might be said of the future. But which country? For Europeans and Americans today, the answer is Russia.

In this visionary work of contemporary history, Timothy Snyder shows how Russia works within the West to destroy the West; by supporting the far right in Europe, invading Ukraine in 2014, and waging a cyberwar during the 2016 presidential campaign and the EU referendum. Nowhere is this more obvious than in the creation of Donald Trump, an American failure deployed as a Russian weapon. But this threat presents an opportunity to better understand the pillars of our freedoms and face the choices that will determine the future: equality or oligarchy, individualism or totalitarianism, truth or lies.

‘A brilliant and disturbing analysis, which should be read by anyone wishing to understand the political crisis currently engulfing the world’ Yuval Noah Harari, bestselling author of Sapiens

With the end of the Cold War, the victory of liberal democracy was thought to be absolute. Observers declared the end of history, confident in a peaceful, globalized future. But we now know this to be premature. Authoritarianism first returned in Russia, as Putin developed a political system dedicated solely to the consolidation and exercise of power. In the last six years, it has creeped from east to west as nationalism inflames Europe, abetted by Russian propaganda and cyberwarfare. While countries like Poland and Hungary have made hard turns towards authoritarianism, the electoral upsets of 2016 revealed the citizens of the US and UK in revolt against their countries' longstanding policies and values.

But this threat to the West also presents the opportunity to better understand the pillars of our own political order. In this forceful and unsparing work of contemporary history, Snyder goes beyond the headlines to expose the true nature of the threat to democracy. By showcasing the stark choices before us-between equality or oligarchy, individuality or totality, truth and falsehood-Snyder restores our understanding of the basis of our way of life, offering a way forward in a time of terrible uncertainty.

John D. Cofield
5,0 van 5 sterren Chilling And Appalling, And Highly Important Reading
11 mei 2018 - Gepubliceerd op Amazon.com
Geverifieerde aankoop
As a professor of history Timothy Snyder has written extensively on authoritarian and totalitarian movements in the twentieth century. The Road to Unfreedom is one of his briefer works, but an extremely important one nonetheless. Snyder's most important contribution to the growing set of volumes analyzing why the 2016 US Presidential election went so catastrophically wrong is to set the events of that year in their proper historical context, reminding us once again that history not only repeats itself, it sometimes whacks us over the head and screams "Why didn't you pay attention?"

Snyder spends the first section of his book detailing the differences between the politics of inevitability, in which progress is believed to be unstoppable and democracy and capitalism the certain future for all; and the politics of eternity, in which progress is temporary and history is cyclical, favoring elites and abandoning any concern for the masses. He identifies the Russian philosopher Ivan Ilyin as a high priest of the politics of eternity. An anti-Bolshevik who was exiled from Soviet Russia in 1922, Ilyin called for a Fascist counter-revolution and portrayed Russia as the innocent victim of foreign intriguers. Although Ilyin died in the 1950s his writings were to have enormous influence on the Russian politicians of the 2010s who oversaw their country's descent into kleptocracy, including Vladimir Putin himself. It was thanks to Ilyin's influence that Putin took steps to destabilize the regions he perceived to be Russia's enemies, primarily the European Union and the United States.

Snyder spends a great deal of time detailing the events of 2014-15 in Ukraine, which the Russians invaded while denying they were doing so, spreading confusion with the assistance of the government-controlled Russian media as well as more reputable Western outlets like the Guardian and the Nation. I found these chapters most eye-opening because like most Westerners I remember being extremely confused over what exactly was taking place between Ukraine and Russia. As I read, I realized that in many respects what happened to Ukraine in 2014 was a practice round for what was to occur in the European Union and the United States in 2016. Snyder goes on to expose Russian efforts to influence the Brexit vote in the United Kingdom and the United States. Much of his material here has already been covered, but it's still important to reread it and be forewarned for the future. As I read, I found my memory returning again and again to an old TV mini-series from the 1980s called "Amerika," about a Soviet takeover of the United States. Reading of Kremlin conspiracies and conversations between Russian oligarchs and their European and American stooges making plans to defeat the West I realized that that old series has actually come to fruition thirty years after its broadcast.

The Road to Unfreedom ends bleakly, though the last lines from the epilogue does allow some hope: "If we see history as it is, we see our places in it, what we might change, and how we might do better. We halt our thoughtless journey from inevitability to eternity, and exit the road to unfreedom. We begin a politics of responsibility. To take part in its creation is to see a world for a second time. Students of the virtues that history reveals, we become the makers of a renewal that no one can foresee."

This is a brief work of less than 300 pages followed by an extensive End notes section. It is one of the most important works concerned Americans and Europeans can read in 2018.

Top Dawg
5,0 van 5 sterren You've gotta read it, but it can be a struggle in spots. See why here...
25 juni 2018 - Gepubliceerd op Amazon.com
Geverifieerde aankoop
Snyder's book, "The Road to Unfreedom" is daunting. It's jacket has the words "Russia, Europe, America," and that might lead you to believe it covers each country in succession. Instead it covers them in parallel with a lot of emphasis on Russia. You need to know that at the outset. Snyder has terms of his own construction such as the "politics of inevitability" and the "politics of eternity." Reread these very carefully on pages 8 and 9 and dog ear those pages. They are central to the rest of the book. Unfortunately, they are not intuitively clear, never well defined, and referred to often. This is the major flaw of the book.

Snyder has a peculiarly insightful analysis of events. It can be both revealing and confusing at the same time. His prose ranges from clear and concise to intertwined and difficult. I had to double back often to track some thoughts (something I almost never have to do). The short ending epilogue is particularly obtuse.

All that said, the man has done his homework remarkably well (with help from his grad students). His accumulation of specific facts and his tying them together make the book a compelling read and a punch to the gut. You get insights not found elsewhere. Just three examples...1. The influence of the political philosopher Ivan Ilyn on Putin and contemporary Russia, 2. The truth behind the war in Ukraine especially it's cyber and propaganda elements, 3. The links between Russian oligarchical and criminal money and Donald Trump's business ventures. Snyder makes a strong case that Trump is at best a Russian patsy if not much worse. Trump lovers will gag on the facts he lays out.

If you want to get more on Trump and where America is headed, I recommend reading "Trumpocracy" and "Killing Democracy." You may also like Snyder's very short book "On Tyranny." If you get caught up in his idea of the "politics of eternity," you might find "The Fourth Turning" worth reading. It's a bit bizarre, but it espouses a cyclical form of history that complements Snyder's description. This last book has been deemed "Steve Bannon's Bible" by some. All thee books are on Amazon.

(Spoiler alert - stop here unless you want to find out more about the content.) There are some inescapable conclusions from the book. Russian media is managed to present the story the government wants presented and bears absolutely no connection to the truth. It is the ultimate in "fake news." This is so blatant that Americans really cannot imagine the breadth and depth of its lies. Russia is actively workjng to destabilize America and Europe in order to bring them down to the economic and undemocratic level of Russia. Since Russia cannot improve due to its kleptocracy and oligarchy, it's only option is to ruin the West. The Russians have financed Trump to cover his failed businesses and massive debts putting him in their pocket. The ties between the government and the oligarchs enable Putin to use them as intermediaries so that support is not directly tied to the government. Hence, "no collusion." Russia back Trump because they realized how destructive his personality and illogical actions would be to U.S. government. Snyder lays out the fact that all of Russia's efforts were for Trump and against Clinton to make that point. America is in an information war for the truth in order to save it's democracy. Fox News and the far left are not helping as both get baited and ensnared by Russia misinformation.
Meer lezen
107 mensen vonden dit nuttig
Vertaal recensie in het Nederlands
Ga naar Amazon.com om alle 170 recensies te bekijken 4,3 van 5 sterren
Terug naar boven
Over ons
Verkoop bij ons
We helpen je graag
© 1996-2020, Amazon.com, Inc. en dochterondernemingen