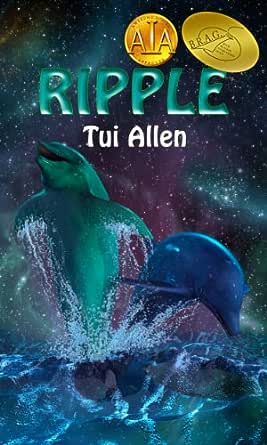 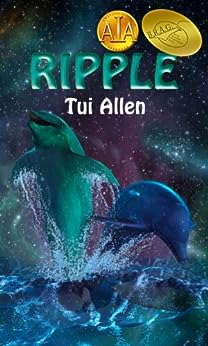 Twenty million years ago, powers of the universe allow an ancient spirit one final chance to achieve a mysterious intellectual purpose, by incarnating it as a dolphin on the planet Azure (Earth.) The spirit is born as Ripple, a vulnerable female with a seeming tendency to insanity. She falls for the scarred fighter-dolphin Cosmo and love inspires her to achieve her purpose. But before she can communicate her discovery, she must overcome terrific odds among the terrors and tragedies of the ancient oceans. If she can succeed, the universe will change forever, and allow dolphins to profoundly affect the yet-to-evolve human race.
Ripple is an inspirational story in the Visionary and Metaphysical Fiction genre. It can also be firmly classed as mind/body/spirit fiction, (MBS) or marine environmental fantasy.
The print version of this unique New Zealand book was selected by the NZ Society of Authors to represent it at the Frankfurt Book Fair in 2012, New Zealand's year as "Country of Honour" at the fair. Ripple is already attracting critical acclaim from reviewers around the world and is often favourably compared to Jonathan Livingston Seagull.
Now translated and traditionally published as a hardcover print edition in the Czech Republic and Slovakia.

Note: For at least one year from August 25th, 2019, 100% of author royalties will be donated to Maui and Hectors Dolphin Defenders in New Zealand. The Maui dolphins are the world's smallest and with only about 60 or so left alive, they are critically endangered. The Defenders do everything they can to protect them, which is why we want to help them.

Twenty million years ago, powers of the universe allow an ancient spirit one final chance to achieve a mysterious intellectual purpose, by incarnating it as a dolphin on the planet Azure (Earth.) The spirit is born as Ripple, a vulnerable female with a seeming tendency to insanity. She falls for the scarred fighter-dolphin Cosmo and love inspires her to achieve her purpose. But before she can communicate her discovery, she must overcome terrific odds among the terrors and tragedies of the ancient oceans. If she can succeed, the universe will change forever, and profoundly affect the yet-to-evolve human race.This important piece of metaphysical literary fiction is written for adults but is eminently suitable as a text for secondary school students, being both challenging, absorbing and informative of the ocean environment that covers most of our world.The book was selected to represent New Zealand authors at the 2012 Frankfurt Book fair during New Zealand's year as country of honor at the fair. It has now been translated and traditionally published as a hardcover edition in The Czech Republic.100% of all author royalties for Ripple will be donated to the Maui and Hector's Dolphin Defenders for at least one year from 25th August 2019. Maui and Hectors dolphins are critically endangered species endemic to New Zealand. There are fewer than 70 Maui dolphins left alive. They are the world's smallest dolphin. One of the main objectives of the Ripple story is to allow readers to confront possible consequences to humans of dolphin extinction, they might never otherwise have considered. So the author felt that the best place to send the money was to the group working so hard to prevent extinction of some of the world's most endangered dolphins.
Alle bekijken
click to open popover

Owl
5,0 van 5 sterren A Beautifully Told Story of the Here and the Hereafter, from 20 million years ago
6 maart 2017 - Gepubliceerd op Amazon.com
Geverifieerde aankoop
"There are no boys in the school who can touch him for physical speed and skill. But he has been shocked to discover there's a girl who can outpace him and she's no older than he."
"Who is this female wonder athlete?"
"She's your daughter, Ripple,whose sanity has often been questioned."
Rigel gaped, spluttering slightly. He was speechless for a long moment and then he began to laugh. His laughter grew until it infected Delph and they laughed until the sea around them quaked." (p.118)

After the first reading of Tui Allen's "Ripple," one might consider in grateful, amazed contemplation the Here and the Hereafter, or complex loving relationships, or dolphin communities, or the urgency of environmental protection, or or or. Father Clement and Sister Sterne, forgive me. "Please," I thought, "when you sentence me again to life, let Pearl be my mother." Later thoughts can be more worthy of "Ripple," but this book can sink deep in one's mind and heart from which many, many other thoughts arise.

The Story: A weary ancient soul's aura is almost extinguished. Yet Sister Sterne feels in this spirit something unique, so remarkable, it could change the universes. Father Clement, feeling the soul's need for rest, objects. One last chance, they agree, but in the right, the best, situation. So in dolphin Pearl's womb, a baby dolphin begins who is born as Ripple, questing even before birth, for something she MUST discover.

. Far to the south, in another school, a boy dolphin is just two days old. His father and mother, attacked by a shark, thought-stream a call for help, giving their lives to delay the shark's attack on Cosmos long enough for the fighter dolphins to arrive. The fighters dispatch the predator and bring Cosmos back to the caring protective pod, a baby scarred early in mind and body.

The rest of this slim book (about 200 pages in 27 chapters) tell what happens as Pearl's child, the young Ripple, seeks what she has tried to discover over so many years and as Cosmo, too, struggles to learn who he is, where he is going.

Their story, also the story of the dolphins and their world, of the deities of the Divine Hierarchy, is told mostly through expertly written dialog and some narrative. Tui Allen creates characters of Dickensian individuality including the blue-ringed poisonous octopus, Erishkigal and the charming five-day memory octopod, Squelch. Her world is observed and described with the keenness of a profoundly knowledgeable naturalist, like a current-day John Muir who focuses on the waters of Azure. And great grand themes of learning, of the many forms of love, of the Hereafter, and of what the bl**dy blazes we are doing to the earth & waters are infused in every page.

ANY ALERTS? In many ways, none. Readers from 10 to 100 may be grateful to Allen (and illustrator Joe Bergeron) for "Ripples." Even those usually allergic to anthropomorphizing other life forms can read this book with much ease and understanding. Readers' groups might find in "Ripples" a provocative and yes, loved, take-off.

That said, however, the book might be stronger with a few changes or additions.

--a page or so added introducing some of the names, a glossary, since many are resonant but perhaps unfamiliar---such as Eresh-kigal

--a page or so for additional reading. "Ripples" is clearly based on the author's observations and a lifetime of ocean knowledge. There are some other books accessible to the likely readership, however, on dolphin behavior, on octopods, and such.

Overall, five stars and a galaxy of thanks to Tui Allen

May95020
5,0 van 5 sterren This Slim Volume is A Life Changing, World Changing Book
24 oktober 2014 - Gepubliceerd op Amazon.com
Geverifieerde aankoop
I truly doubt if I can do this book justice in a review. It is simply amazing. I have not ever read a book that so enchanted me. Is it an Adventure Story? Philosophy? Love Story? Spiritual Quest? Comedy? Suspense? Mystery? Metaphysical? A fable? It simply defies categorization. It is a beautiful, exciting story perfect for our time and for all ages. As a very well read, well educated person of 61 years I could not put it down. But it would be a wonderful book to read as a family, to a classroom, for a book club, or shared between a parent/grandparent and a child. For younger than fifth grade, you might leave out some of the more intense shark moments.This book can spark discussions and ideas and I believe it has the potential to change hearts, minds, spirits and even the world. Ripple is a unique dolphin trying to find her gift, what makes her special, her purpose. Through some of the most exciting adventures, heartbreaking scenes, tender romance, and soul stirring devotion you will ever read, Ripple just might reignite your passion for life and longing to make the world a better place just because you lived. Ripple could inspire conversations about the "hard topics" or just be enjoyed as a story. Lyrical language, a story line that just won't quit, true love, family devotion, true friendship, community, and the power of hope to change the world are just a few of the gifts you will receive when you read Ripple.....Please do. It's truly never too late to become who you want to be.
Meer lezen
2 mensen vonden dit nuttig
Vertaal recensie in het Nederlands

Michael C. Turner
5,0 van 5 sterren RIPPLE Will Move Your Heart, Mind & Soul
3 juni 2014 - Gepubliceerd op Amazon.com
Geverifieerde aankoop
Tui Allen's delightful "Ripple" will move your heart, mind and soul with a story that will immerse you deep within a Cosmic sea of wonder. It is a tale with a theme older than the known Cosmos and yet as fresh, new and full of life as a newborn from any species that ever lived or shall live across the ocean of space. This engaging and inspiring story by a truly gifted author will stimulate all your senses as it awakens the stellar elements deep within your mind, body and soul. Enhancing this wonderful novel is cover art created by world class artist Joe Bergeron. The only thing that could possibly make this book better is for it to one day be turned into a fully illustrated story via a collaboration of the author, Tui Allen, and the artist, Joe Bergeron.
Meer lezen
Een iemand vond dit nuttig
Vertaal recensie in het Nederlands

Victor lancina
5,0 van 5 sterren The search for music
2 oktober 2014 - Gepubliceerd op Amazon.com
Geverifieerde aankoop
Rarely do I come upon a book that captures my very soul. Cast upon the world of dolphins and the sea, it echoes love , brutality,family solidarity, and the fictional beginnings of music in a world of the dolphin species. And it poses the possibility that we as humans have only scratched the surface in learning what the animal world could teach us.
Meer lezen
Een iemand vond dit nuttig
Vertaal recensie in het Nederlands

Kindle Customer
5,0 van 5 sterren Sensational Story
20 januari 2015 - Gepubliceerd op Amazon.com
Geverifieerde aankoop
I gave this book a five star rating because I just couldn't bring myself to give it a four. It was joyful at times, scary & deeply concerning at others. A fantastical work of love, family, community, joy, perseverance and music all set within the oceans of dolphins. Yes, there is a love story but there is also so much more...
Meer lezen
Een iemand vond dit nuttig
Vertaal recensie in het Nederlands
Ga naar Amazon.com om alle 60 recensies te bekijken 4,8 van 5 sterren
Terug naar boven
Over ons
Verkoop bij ons
We helpen je graag
© 1996-2020, Amazon.com, Inc. en dochterondernemingen