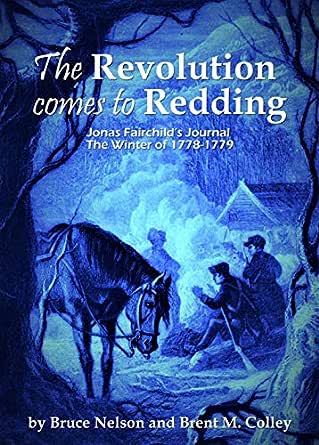 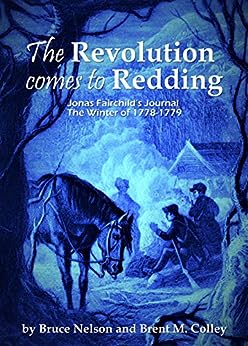 The story you are about to read is a fictional account of actual events that took place during the fall and winter of 1778 – 1779 in Redding, Connecticut when the troops under the command of General Israel Putnam billeted there during the Revolutionary War. This is not an account of the battles that led to the ultimate victory of the Continental Army, but rather an account of the sacrifices made by the ordinary citizens of a small town where the number of inhabitants more than tripled in size in a matter of weeks, giving Redding one of the largest populations in the entire state in January of 1779! Some of the characters in this account are real and some are fictional, but the historical events and places are as accurate as the authors could portray them.
click to open popover

Redding’s town historians: Brent Colley and Bruce Nelson, have scripted a piece of historical fiction that entertains and educates about Redding’s role in the Revolutionary War.

Written as an educational tool, The Revolution Comes to Redding: Jonas Fairchild's Journal 1778-1779
unfolds in a way that is captivating to readers of any age. It is a must read for every person in Redding, and for anyone interested in how war effects the average citizen in any locality.

Fact and fiction are intermixed as the tale takes us to places that are familiar around town: yes, there really was a Gallows on Gallows Hill Road! And, Guardhouse Drive off of Umpawaug Road really did have a guard house and stockade that held prisoners and deserters. Among those were Jones and Smith, two young men executed as an example to spies and deserters on an otherwise quiet day in Redding.

The story is presented as a journal found tucked away in an attic. Nineteen fifties educator Caroline Marshall (based on actual RES teacher Anne Marshall) uses it as a tool to captivate the imaginations of her sixth-grade class. Surprising to many current students, in the fifties, Redding Elementary school went to the 8th grade! Co Author Bruce Nelson used some of the names of his actual RES classmates to populate the fictional class. Familiar Redding surnames are peppered through the story in a way that makes the local reader feel part of the action.

The journal is revealed to be the work of 14-year-old Jonas Fairchild, the son of the sawmill owner who provided the timber for the towns needs. Jonas and his immediate family are fictional, but the Fairchild name is an old one in Redding.

Through Jonas, we learn about life in the late 1700s and how the Revolutionary War changed the look and population of Redding.

The authors thoughtfully weave the two tales together in a way that has readers asking for more.

Nelson and Colley have made history come alive in our small town in a fresh and modern way. Locals will never look at Redding the same way.

Book Lover
5,0 van 5 sterren Bringing History to Life
17 juni 2019 - Gepubliceerd op Amazon.com
Geverifieerde aankoop
You probably know about George Washington and the hardships of his winter in Valley Forge. I learned about this book from the FaceBook group for Redding, CT., The authors are official historians of the town, and I grew up there. This story, told in journal form, is based on actual events in the winter of 1778-79 when General Israel Putnam set up quarters for his troops in Redding. The keeper of the journal is a 14 year old boy who tells the story from the perspective of a resident of Redding and what impact such a vast number of soldiers has on the town. What a fascinating story it is, laying out the conflicts between Patriot and Tory among the townspeople, as well as creating empathy for both residents protecting their food and the soldiers whose purpose is to defend the colonists but who are themselves suffering hunger. A book like this is great to encourage discussion among students, but it is equally interesting to anyone who likes American history.
Meer lezen
Vertaal recensie in het Nederlands

Ken Erickson
5,0 van 5 sterren History comes alive with this fictional diary!
27 juni 2019 - Gepubliceerd op Amazon.com
Geverifieerde aankoop
A wonderful tale based on Connecticut history, during the early years of the American Revolution. Told from the perspective of a boy’s journal; and shared by a Redding school teacher with her students, many years later.
General Putnam’s wintering in the area known today as Putnam Park, had its effect on the early residents of Redding. This fictional account breaths life into what those times may have been like. Interesting story and fun reading for history buffs, both young and old!
Meer lezen
Vertaal recensie in het Nederlands

j
5,0 van 5 sterren I could feel the cold.
1 juli 2019 - Gepubliceerd op Amazon.com
Geverifieerde aankoop
Very well written. Makes me want to visit the area. Easy way to learn what conditions were like at that you in our history.
Meer lezen
Vertaal recensie in het Nederlands