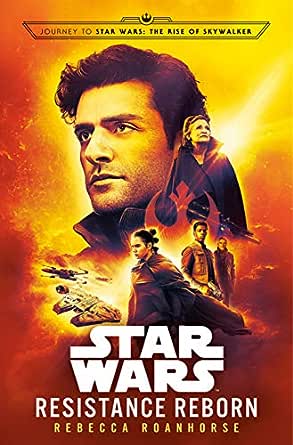 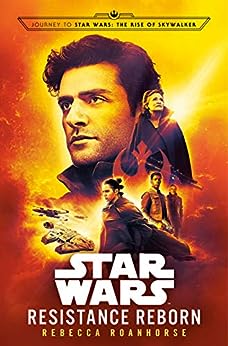 "This is the Avengers: Endgame of Star Wars tie-in media."--io9 "Resistance Reborn is an integral chapter to the Skywalker Saga."--The Hollywood Reporter "A well-written adventure that'll draw you in."--CNET "Required reading before The Rise of Skywalker."--Nerdist

"Sure to thrill fans who love seeing characters from across Star Wars stories and mediums . . . heartfelt and action-packed."--Hypable "Pure delight, impossible to put down, brilliantly plotted."--San Francisco Chronicle

In this pivotal prequel to Star Wars: The Rise of Skywalker, the heroes of the Resistance—Poe Dameron, General Leia Organa, Rey, and Finn—must fight back from the edge of oblivion.

The Resistance is in ruins. In the wake of their harrowing escape from Crait, what was once an army has been reduced to a handful of wounded heroes. Finn, Poe, Rey, Rose, Chewbacca, Leia Organa—their names are famous among the oppressed worlds they fight to liberate. But names can only get you so far, and Leia’s last desperate call for aid has gone unanswered.

From the jungles of Ryloth to the shipyards of Corellia, the shadow of the First Order looms large, and those with the bravery to face the darkness are scattered and isolated. If hope is to survive, the Resistance must journey throughout the galaxy, seeking out more leaders—including those who, in days gone by, helped a nascent rebellion topple an empire. Battles will be fought, alliances will be forged, and the Resistance will be reborn.

TheGeeksAttic
4,0 van 5 sterren This novel brings so much together from canon.
5 november 2019 - Gepubliceerd op Amazon.com
Star Wars: Resistance Reborn was written by Rebecca Roanhorse. This novel is marked with the Journey to The Rise of Skywalker banner, preparing us for the final Skywalker saga film.

SUMMARY: The Millennium Falcon holds the remanence of the Resistance. After the events of The Last Jedi, all but a handful of the Resistance have perished. The small group is hurtling through space in a desperate attempt to find a safe haven to refuel and rest. Poe Dameron has sought out his Black Squadron, who’d been preoccupied with a mission of their own and informed them of their losses, and confessed his actions. Black Squadron remains loyal to Dameron despite his failure. Soldiers are important, but what Leia also needs, is a leadership team.

It’s brought to Leia’s attention that a number of allies may have been captured by the First Order. In this novel, the mission of the Resistance, is to find allies to build up their numbers… and survive.

CHARACTERS: This book does something fresh in canon with characters. Of course we have the popular Resistance characters left over from The Last Jedi, but so many other characters are either new, or brought in from other media. I’m not going to go deep into all the characters, but I’ll mention two that we have been introduced to in previous material, and just one other character.

Rey: She’s awkward, very awkward. Although she’s with the Resistance physically, mentally, she’s absent. She has a really hard time expressing herself and doesn’t know how to relate to anyone around her. She only really feels comfortable around Finn. We don’t get a lot of action with Rey in this novel. I’m not sure how to interpret her as a character in this book. I get the feeling that maybe the author wasn’t really given the freedom to fully dive into character details. Rey is very confused, maybe even conflicted.

Shriv Suurgav: He’s a Duros, an alien with a big head, blue skin, and bulbous red eyes. He makes his return to canon material! He was a character in the video game Battlefront II. He’s got a fun sense of humor, the go to character for comic relief. His presence is a welcome one. I hope we get to see more of him in future novels or possibly a cameo in The Rise of Skywalker.

Wedge Antilles: He’s retired from the military lifestyle, living in the outer-rim just living his life. He’d done so much for the Rebel Alliance, fighting in all the major battles and doing what most of his peers did do, survive. He’s an old man now, living with his wife in peace on an outer rim world. However, he’s got his bug-out-bag packed and ready for the day if he’s ever needed. Now, after the First Order decimated the New Republic and nearly wiped out the Resistance… Wedge is hesitant, but willing to jump back into the fray.

OVERALL THOUGHTS: This book was pretty darn good. Rebecca Roanhorse writes a hopeful tale filled with nostalgia, connectivity, and thrills! In my opinion, this book reminded me of how it feels reading the original Star Wars Expanded Universe. By that, I mean that this story is so connected to the overall canon. The return of many characters from across different mediums was so awesome. Roanhorse brings in things from comics, video games, the original film trilogy, and other novels.

While the story is fun and the plot thrilling, the dialogue is mostly fair. Some of the characters were written spot on, some not so much. I believe that may be a result of an upcoming film involving these characters. The humor from Shriv was excellent, it was organic. Many other comic lines from other characters came across a little forced and just too silly, not funny. My only other complaint would be the usage of the social justice quota. The sexual orientation of a side character is unimportant and irrelevant to the overall story or to the character in general. Stop with the forced “millennial emotional equality” checklist and tell the story naturally.

This novel is great, Rebecca Roanhorse nailed it. I’d say this is definitely a book the Star Wars fans have been wanting.

So, do I recommend that you read Star Wars: Resistance Reborn? Yes, it’s a book that brings in so much from the overall canon story.

RATING: I give this book an A
Meer lezen
84 mensen vonden dit nuttig
Vertaal recensie in het Nederlands

Amazon Customer
1,0 van 5 sterren Del Rey swings and misses again.
5 november 2019 - Gepubliceerd op Amazon.com
Geverifieerde aankoop
Del Rey could easily hire someone like Drew Karpyshyn, who (1) has written some of the most popular SW books from the EU/legends and, (2) is a phenomenal writer/author, but NOPE, they hire this author that has zero SW writing experience. If there was a dumpster fire emoji, I'd put it here. Since Disney bought the franchise, even the most well written books have had low stakes and minimal impact on the SW universe. This book is no different. To compound the issues with this book, the sequel trilogy characters are cookie cutter and generic. If you DON'T care about good storytelling and writing in the SW universe, by all means, buy this book and give your money to Lucasfilm. Oh, and if you're obsessed with sexual orientation and who characters sleep with at night (which Lucasfilm obviously is), then this book is for you.
Meer lezen
74 mensen vonden dit nuttig
Vertaal recensie in het Nederlands

Amazon Customer
5,0 van 5 sterren Great story and amazing connections to other pieces of Star Wars Canon
6 november 2019 - Gepubliceerd op Amazon.com
Geverifieerde aankoop
The story this book gives us is a very interesting and riveting snapshot of the events that take place right after The Last Jedi, and has made me even more excited for The Rise of Skywalker than I already was! The book also has some amazing connections to other pieces of current Star Wars Canon, such as the comics, video games, other books, shows and the films - It will feel very rewarding for those keeping up with all of that, I know it was for me. I found it to be a quick read for me, as I didn't want put it down. I totally recommend reading this before seeing TROS, if you have the chance.
Meer lezen
36 mensen vonden dit nuttig
Vertaal recensie in het Nederlands

Kindle Customer
5,0 van 5 sterren Old Friends and New Worlds
6 november 2019 - Gepubliceerd op Amazon.com
Geverifieerde aankoop
I love what Rebecca has done with the Star Wars canon. Been wondering where a certain character has been all new trilogy: answered. Want to know where Maz when last movie: you get to see. Have a deep desire to see a weak pathetic man get his comeuppance: it is here!
Meer lezen
32 mensen vonden dit nuttig
Vertaal recensie in het Nederlands

Dennis Keithly
5,0 van 5 sterren Resistance Assemble!
8 november 2019 - Gepubliceerd op Amazon.com
Geverifieerde aankoop
With The Rise of Skywalker right around the corner, there has been plenty of material released to prepare readers for the movie. Resistance Reborn is one of those novels. This is a fun read that gives Star Wars fans an idea of how the Resistance rebuilt after the events of The Last Jedi.

Setting Expectations: this book really is about the Resistance getting things together, and it is kind of quiet in the action department. There are fights and battles to be had, but they are of a smaller scale, and most of them come at the end of the novel.

Sequel Era All-Stars: Fans if the larger Star Wars universe will be delighted with this book. As Leia and Poe work to assemble a new Resistance, they call on allies from all corners of the galaxy. This includes characters fans have met in video games, books, movies, and comics. It is a great blend of media.

Force-lite: The Force isn’t absent from this book, but this book isn’t about the Force. Rey is around, but she has a fairly minor role. Leia has a large role, but even then, she isn’t dwelling on the Force much at all. This book is about rebuilding the Resistance, and the Force is left for other media.

Poe and Leia: The majority of this book is told from either Leia or Poe’s perspective. After all, they are the leadership of the Resistance. Poe is the one that needs to get past his mistakes in The Last Jedi. He finds inspiration along the way, and Leia’s guidance goes a long way. Finn and Rose are in the book, but their roles are also relatively minor. Finn has some good scenes with Poe, but it really isn’t his story. Rose is a supporting character largely relegated to events in the background. The same could be said for Chewbacca, Threepio, and Artoo.