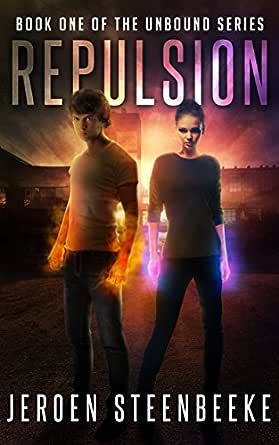 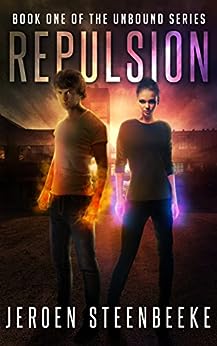 I used to think I was a pretty normal teenager: I got up in the morning, went to school, did my homework, played videogames, and dreamed about Karen—one of the girls in my class. When I found out she liked me, too, I thought I was the luckiest guy alive. But everything changed when we kissed. Something awakened inside of us, and now we know that we're not normal teenagers after all.

For a while I thought these powers were pretty amazing—I mean, who wouldn't want superpowers? But it stopped being fun when Karen started hearing a voice in her head. A voice that told her I was her enemy. A voice that could take control of her. A voice that was only the first glimpse of a world we never knew existed.
click to open popover

Book Vampire
3,0 van 5 sterren It was okay.
18 oktober 2016 - Gepubliceerd op Amazon.com
Geverifieerde aankoop
Strange powers seem to occur in two teenagers who are very impulsive in their actions. It turns into a lot more than just powers; there is a much bigger part at hand.

I thought the book started off a little slow, and at some parts childish, and confusing.

Once this book hit about chapter four I then grew more interested in the book although I couldn't get a good read on what exactly the main character looked like. I found it hard to become a big part of the book because of the lack of description. The book lacked body until closer to the end.

I did think that the book was unpredictable, however it lacked in action for a book with such a story attached. I felt like more could have been added to really get a hold on the story. The end is what kept me interested in what the next book might bring, so despite the three star rating I would still like to give the second book a try.

I would recommend this book to teens 16 and up.

Whitney
2,0 van 5 sterren Not very good
1 juni 2016 - Gepubliceerd op Amazon.com
Geverifieerde aankoop
I received this book for an honest review and it wasn’t the best or the worst book I’ve ever read it just wasn’t very memorable. I love to go back and reread some of my favorite scenes from some of my favorite books and this is one that I wouldn’t go back and read. It was a short read I finished it in one day but if it had been any longer I most likely would have stopped reading because it started out super slow and it was only near the end that any big type of action happened. I just expected from the summary for it to be a crazy ride the entire time and from just a few moments here and there it wasn’t until the last few chapters that anything happened. When I pick up a book I want to be dragged into their world and not surface until the story finally ends. With this book I didn’t feel any emotions nothing deep sucked me in. Also the book ended on a cliffhanger so you don’t even know what happens unless you read the other installments.
Meer lezen
Een iemand vond dit nuttig
Vertaal recensie in het Nederlands

Glenda
4,0 van 5 sterren I have read it twice
12 mei 2019 - Gepubliceerd op Amazon.com
Geverifieerde aankoop
This one was hard to get into but had some interesting points throughout. Usually if i am unsure out a book, I won't review as I feel that if i can't say something nice, don't say anything at all. This book has a lot of detail and the storyline is interesting. I think, for me, the concept of being a vessel and all of a sudden finding out made it a bit harder to take. It did make for an interesting story though
Meer lezen
Vertaal recensie in het Nederlands

Aileen M.
5,0 van 5 sterren Enjoyable and very well written!
15 september 2018 - Gepubliceerd op Amazon.com
Geverifieerde aankoop
This is YA fiction and I'm retired, but I'm still going to follow the series. I liked the characters and loved the conception of their flying powers - it fit a lifelong fantasy of my own. The storyline kept my interest well enough to read more. Possibly because the author is Dutch - i.e. impeccably educated - the English usage and spelling were flawless, unlike what I see constantly from American writers. His work is a pleasure to read.
Meer lezen
Een iemand vond dit nuttig
Vertaal recensie in het Nederlands

AlanB
4,0 van 5 sterren Good but short
6 september 2018 - Gepubliceerd op Amazon.com
Geverifieerde aankoop
My only complaint is in the title of this review. It is a quick read, not just because it's short, the story moves quickly. There are some unexpected things, like where there powers cone from. The book is a good start I just think the author could have carried it on a bit longer.
Meer lezen
Vertaal recensie in het Nederlands
Ga naar Amazon.com om alle 14 recensies te bekijken 3,6 van 5 sterren
Terug naar boven
Over ons
Verkoop bij ons
We helpen je graag
© 1996-2020, Amazon.com, Inc. en dochterondernemingen