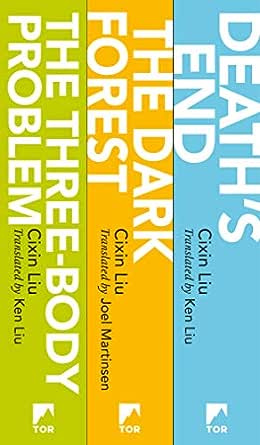 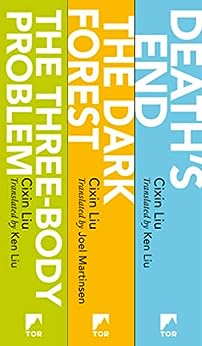 Printprof
5,0 van 5 sterren Here you enter The Dark Forest! NOT the USS Enterprise!
22 januari 2018 - Gepubliceerd op Amazon.com
Geverifieerde aankoop
First: The Three Body Trilogy is what is known as "hard science" science fiction. Many recent theories from physics and astrophysics--as well as from biology and computer science--under-gird the narrative.

I came across a reference to Cixin Liu's book in an article speculating about what the difference in response to a "first contact" might be if the Chinese rather than a Western/European nation was the recipient of a message from an extraterrestrial society of advanced beings.

One of the most interesting aspects of "Three Body Problem" is its quite convincing, and much more pessimistic view about dealings with truly alien, highly intelligent and technologically superior beings. This is expressed in the concept of "The Dark Forest"--a universe in which the struggle for survival ("Nature red in tooth and claw") is the paradigm.

The trilogy is a sweeping story which takes the reader through possible stages of human political, social and technological development from present to the end of the universe as we know it! The key characters in the tale persist over time thanks to certain technologies which allow them to survive. The characters are well-developed and are both sympathetic and believable.

Three Body Trilogy is speculative fiction at its best--if not at its most optimistic. For "Star Trek"--or even "Star Wars" fans, it is quite a good reality check!

It might be interesting for U.S. readers to know that Cixin Liu is probably the most famous writer of Science Fiction in China. Moreover, the Chinese Space program actually consults with Cixin Liu, who is also a scientist!
Meer lezen
24 mensen vonden dit nuttig
Vertaal recensie in het Nederlands

Definitely a must-read and a real treat for "hard" sci-fi fans! Across the trilogy, I think Liu Cixin must have used just about every recent techno lead and out-there basic research hypothesis as a plot device: what could be the implications of this, that, and the next thing? How could this be used as a weapon? How would society adapt to that? How might we experience the next thing???

But of course, sci-fi as a genre is usually married to a theme, and of course Liu grapples with the clash of civilizations. But overlaying all the obligatory battles is the grand espionage thriller. Think John Le Carre meets Star Wars, complete with all the agonizing questions about how far we can go in compromising human values (e.g., "universal human rights" on earth) in the fight against a ruthless enemy. A decent grounding in game theory might be a pre-requisite to understanding most of the plot.

I particularly enjoyed scenes building on Edward Abbott's "Flatland" exploring how we might experience different dimensions. And a satisfyingly open-ended ending (Asimov would approve).

So why did I give it only 4 stars out of 5? Too long; too many tedious battle scenes; and a particularly laughable male fantasy (fortunately not at all misogynistic; more lame than objectionable).

What I liked least was the view of a universe dominated by Malthusian economics and Hobbesian politics. However, I do appreciate the need to articulate a strong warning against a (probably over-optimistic and naive) Star-Trek mindset. (And I must confess I am a life-long Trek-enthusiast).

When it comes to the science, I still think H.G. Wells had it right - the invaders are more likely to succumb to our germs than we are to their weapons (yes of course they could also be an invasive species but I think the statistics of historical examples on earth point in our favor; Kim Stanley Robinson's "Aurora" points out the risks to anyone seeking to colonize another planet).

I understand there's a movie in the works. Will definitely look forward to that.
Meer lezen
13 mensen vonden dit nuttig
Vertaal recensie in het Nederlands

John O Jacyszyn
2,0 van 5 sterren That’s it?
2 februari 2020 - Gepubliceerd op Amazon.com
Geverifieerde aankoop
This is my review for all three books; It’s been a long time since I’ve had such mixed feelings on a book(s).

First the good stuff; Descriptions of places and people are for lack of better words, “lavish.” Characters and their feelings are deeply explored and they themselves have a huge sense of complexity and depth. They evolve and change and it’s great that way.

The bad; pacing is terrible. Maybe a spoiler of sorts so don’t read more- for a series of books that span “all” of humanity’s timeline so very little happens. Or what happens is a burst of really important epic moments and then a lot of “quiet contemplation” for those involved. Book 1 had 2 key events, book 2, had 2 and book three had 1 and then and ending, of sorts.

So I’m torn by the fact I read them and am glad I read them, but I am not an active proponent for reading this, at least not to general audiences. I say read it is you like “hard science” depictions of time/space and philosophical ruminatings on what is time and space. I say avoid if you like space opera or sweeping stories, and books filled with action.
Meer lezen
2 mensen vonden dit nuttig
Vertaal recensie in het Nederlands

KOD33
3,0 van 5 sterren A Masterpiece I Wish I never Read
1 september 2019 - Gepubliceerd op Amazon.com
Geverifieerde aankoop
Like Ulysses, this trilogy is surely genius, but also dense, confusing, frustrating, obtuse and so full of random detail that is ultimately not relevant that I would never recommend this book to anyone. Maybe this is common for Chinese sci-fi or literature? Maybe it's the translation? This was one of the least enjoyable reading experience s I've had since grad school (for literature) but also a fascinating and in depth work about science and physics in a way I would never read in nonfiction. It's 5 stars for brilliance and maybe 1.5 for story. This took my me summer, replacing 10 fun books. If troubling physics it's probably great. If you like standard scifi, find something lighter.
Meer lezen
3 mensen vonden dit nuttig
Vertaal recensie in het Nederlands
Ga naar Amazon.com om alle 79 recensies te bekijken 4,2 van 5 sterren
Ontdek het beste van shopping en entertainment
Gratis en snelle bezorging van miljoenen producten, onbeperkt streamen van exclusieve series, films en meer
> Ontdek Prime
Terug naar boven
Over ons
Verkoop bij ons
Amazon-betaalmethoden
We helpen je graag
© 1996-2020, Amazon.com, Inc. en dochterondernemingen