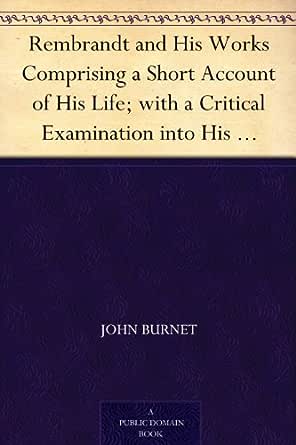 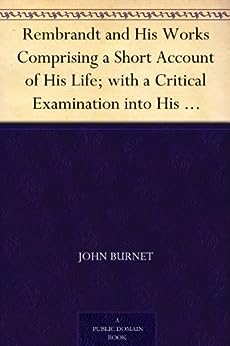 Rembrandt and His Works Comprising a Short Account of His Life; with a Critical Examination into His Principles and Practice of Design, Light, Shade, and ... the Etchings of Rembrandt. (English Edition) Kindle-editie

This book is part of the TREDITION CLASSICS. It contains classical literature works from over two thousand years. Most of these titles have been out of print and off the bookstore shelves for decades. The book series is intended to preserve the cultural legacy and to promote the timeless works of classical literature. Readers of a TREDITION CLASSICS book support the mission to save many of the amazing works of world literature from oblivion. With this series, tredition intends to make thousands of international literature classics available in printed format again - worldwide.
click to open popover

Mei
1,0 van 5 sterren amateurish, full of faults
6 augustus 2012 - Gepubliceerd op Amazon.com
Geverifieerde aankoop
This book is ludicrously amateurish. When I was at 8% of this book I was so angry I wanted to throw my Kindle out of the window. There are hardly any facts in this book that are correct; it is riddled with mistakes, some small but some are really serious. I have decided to delete this book from my Kindle and warn others about it (much better that damaging my Kindle!). This site won't let me give 'zero stars' (let alone a 'minus 5 stars') to a review, so I have to give this 1 star.

Just a few of the many faults I found in just the first 8% of this book (as I mentioned above: this is when I gave up on this collection of nonsense):

-At location 135 (at 8% of this book) the author claims it is not known when Rembrandt died:

(quote:) "As the place of his residence is veiled in obscurity, so is the place of
his demise, which is supposed to have taken place in 1664, as Mr. Smith,
in a note to his Life of Rembrandt, says--"that no picture is recorded
bearing a later date than 1664, and the balance of his property was paid
over to his son in 1665." Mr. Woodburn, in a Catalogue of his Drawings, says:--"It is uncertain what became of him after his bankruptcy, or where he died; a search has
been made among the burials at Amsterdam, until the year 1674, but his name does not occur; probably Baldinucci is correct in stating that he died at Stockholm, in 1670; [...]"(unquote)

This is absolute nonsense: it is known when and where Rembrandt died: he died in Amsterdam on the 4th of october 1669. He was buried on the 8th of october 1669 in a rented grave in the Westerkerk. His relatives paid the sexton of the church 15 guilders. So this author really does not know what he is talking about. An absolute amateur!

-At location 120 (which is at 7% of this book of in total 1653 locations) the author writes that he does not believe that Rembrandt lived in the house that is shown in Amsterdam as the house of Rembrandt. The reason he does not believe this was the house of Rembrandt he gives is: (quote:) "[...] it is well built, four stories high, but it greatly disappointed me." (unquote). This is a ridiculous claim: it a proven fact that Rembrandt lived in this house between 1639 and 1658. The street was called Sint-Anthonisbreestraat at the time Rembrandt lived there, but later got a different name: Jodenbreestraat (as it is still named). The museum 'Het Rembrandtshuis' is located in this house (adress: Jodenbreestraat 4, Amsterdam; it has a beautiful website, also in English). This house was sold by Rembrandt in 1658, he then moved into smaller, rented accommidation at Rozengracht 184, Amsterdam.

-The correct spelling is Gerard Dou (and not Gerard Dow, at location 120)

-The correct spelling is Jacob van Swanenburg (and not Jacob Van Zwaanenburg, at location 100)

- The correct name of his mother was: Neeltje Willemsdochter van Suydbroeck (and not Neeltje Willems Van Zuitbroek, as this author claims at location 95) (Part of this mistake is quite funny, the author calls her: 'son of Willem'; the 's' at the end of 'Willem' means son; dochter means daughter. The spelling of the familyname by the author is just a mess, not funny.)

-It is not true that (quote from location 100:) "they placed him under the tuition of Jacob Van Zwaanenburg, a painter unmentioned by any biographer"[...]". It is a well known fact that Jacob van Swanenburg was the first painter who took him on as a pupil, and this fact is mentioned in biographies.

-When a Dutch name has the term 'van' -which means 'of' and is usually followed by a geographical name or term- in it, it is written with a small letter 'v' when it is preceded by one or more given names or one or more initials or a form of adress (miss, mrs, ms, mr, count, countess, etc) AND followed by a family-name. (In many places it is spelled as 'Van' with a capital: e.g. location 120 the correct way of writing it is: Saskia van Uylenburg).

-The painting 'Simeon in the Temple', painted in 1631, resides in the museum 'Het Mauritshuis, Het Koninklijk Kabinet van Schilderijen' in the Hague. This book only mentions that this painting resides in the Museum of the Hague (at loc. 115), this is much too vague: there are many museums in the Hague.

(I am a Dutch student of Cultural Sciences, including History of Art.)