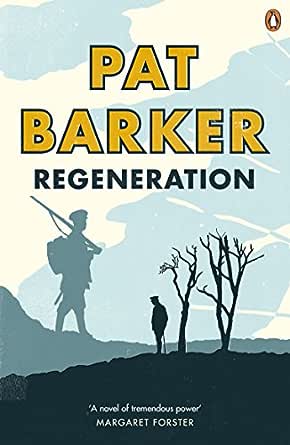 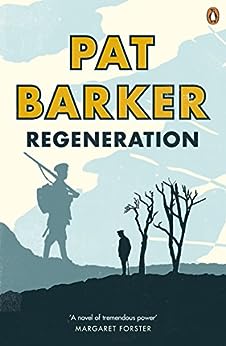 Craiglockhart War Hospital, Scotland, 1917, and army psychiatrist William Rivers is treating shell-shocked soldiers. Under his care are the poets Siegfried Sassoon and Wilfred Owen, as well as mute Billy Prior, who is only able to communicate by means of pencil and paper. Rivers's job is to make the men in his charge healthy enough to fight. Yet the closer he gets to mending his patients' minds the harder becomes every decision to send them back to the horrors of the front. Pat Barker's Regeneration is the classic exploration of how the traumas of war brutalised a generation of young men.

The Regeneration trilogy:
Regeneration
The Eye in the Door
The Ghost Road

Ariel Dowling
4,0 van 5 sterren I enjoyed looking up the words and learning something new as ...
31 juli 2015 - Gepubliceerd op Amazon.com
Geverifieerde aankoop
I just finished this book and while it is 3:07 in the morning, I am too excited about it to save my review until a more acceptable hour such as tomorrow after some coffee. Also, I had too much caffeine tonight and find my thoughts running all over the place and the process of blogging might carrel them, if more a moment.

Regeneration is a trilogy of three books by Pat Barker, something that I did not realize when I ordered through my Kindle the first book, which I am reviewing here. Now that I have finished it though, I am very excited to read the second novel, The Eye in the Door.

This novel is based on World War I and the treatment and symptoms of post traumatic stress disorder on the English soldiers. What is very compelling about this novel is not only the fact that at this time PTSD was still being disputed as something of a 'myth' by some professionals, offering a very unique view to the reader. But, it also explores the torment a respected psychologist and anthropologist, goes through as he tries to help his patients if only to return them to the battlefield to die for their country, as is his duty since he works for the army. A particular solider, poet, and homosexual Sassoon, forces the psychologist to ask himself questions about those who are in charge of the war and why they have not negotiated a peace treaty with Germany despite the thousands of deaths that have occurred on both sides of the line. Dr. Rivers also works with many other soldiers who force the Dr. and the reader to ask serious questions about war and the people behind them (soldiers and politicians), which is a topic that we can all relate to.

This was a subject and an era that I have read little about, especially when paired together, it is something that I have never read. As usual, I looked over some reviews on Goodreads before I purchased the book and came across some particularly harsh reviews, one in particular written by a young woman who was angry more about what the book did not contain than by what the book contained. After reading the novel, all I could do was think back on that review and feel pity for her lack of appreciation and lack of understanding. Also, if a book lacks what you want it to maybe you should write your own?

While this is a very compelling story there were many terms and words that I did not understand and had to look up. At times I struggled to remember character names and their disorder or part in the story but I cannot say that is the fault of the author or of the reader. I enjoyed looking up the words and learning something new as well as learning at the end of the book that many of the characters in the story actually did exist.

Sallie Reynolds
5,0 van 5 sterren A remarkable work of art and life
14 januari 2014 - Gepubliceerd op Amazon.com
Geverifieerde aankoop
I met Pat Barker in 1978 or 79 at a party given by Virago Press in London. Virago had just published her first novel, and the early reviews were coming in, all raves. Barker herself seemed shy and not very ego-driven, which appealed to me. Yet, somehow, when I got back to the US, I didn't read her book. I'm sorry now. I would have been enriched years ago by this writer's wisdom and art.

Recently someone suggested Regeneration, since I had gotten interested in the impact of World War I in Europe (it had a less emphatic effect over here, I think. Not as devastating to us as the influenza epidemic that followed it). And I remembered meeting Barker and wondered that I had let her work slip past me. I began reading, and quickly saw what those early reviewers had meant. I found myself marveling not only at the story, but at this writer's very high art and skills. Many writers tell a good story, and you either read around glitches in the execution or just skip when you come to the dead parts. It had been so long since I had read a truly great book, that I had forgotten the force of masterly skills - I had forgotten how important doing something brilliantly could be to the effect of the whole.

Barker does many things brilliantly. Description of scene and emotion - fantastic. Ditto to internal monologue, which sets a character in our minds. And sliding easily and naturally from one character to another. Moving back and forth in time as simply as we ourselves do when something today calls to mind something from years ago. She deepens our understanding of each character and the background as she goes. This is high art in service of story, not in service to itself.

Barker's knowledge of just which details are important is another skill to marvel at. These scenes are evocative to the reader as well as to the character experiencing them, as tales within tales let us see farther and more clearly. At the same time, the forward movement of the overall story never falters. I couldn't put this book down.

The trilogy, of which this is the first part, treats of the multitude of ways an external trauma, in this case war, acts upon individuals and on a society as a whole. Barker uses historical characters as well as invented ones. And such is the level of her skill, known people like Robert Graves and Siegfried Sassoon, for example, to say nothing of the other war poets and the medical people, are never ever the usual wooden historical characters. They are as finely thought- and felt-out as those other characters whom the writer has been free to invent. The reader is drawn well and truly into their lives, unaware of history's heavy hand.

That means that this is hardly a "historical novel," along the lines of those we have access to every day. It is as natural as Yourcenar's The Memoirs of Hadrian, and to my mind, an even better book than that classic.

I'm now deep into the third and final volume of the trilogy, The Ghost Road (which won England's Booker award in the late 1990s). The second, The Eye in Door, is so powerfully revealing of the inner forces shaping our lives that I will reread it many many times. I cannot even think of parts of it without a shiver.
Meer lezen
22 mensen vonden dit nuttig
Vertaal recensie in het Nederlands
Ga naar Amazon.com om alle 177 recensies te bekijken 4,1 van 5 sterren
Terug naar boven
Over ons
Verkoop bij ons
We helpen je graag
© 1996-2020, Amazon.com, Inc. en dochterondernemingen