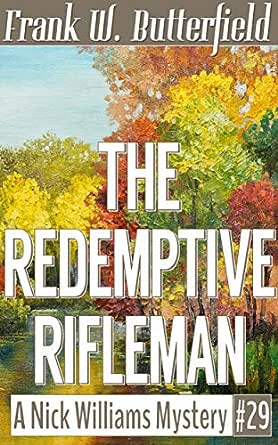 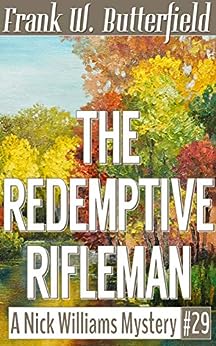 It's the day before Thanksgiving and Nick and Carter have been in Paris for nearly a month when an early-morning call brings the news they've both been dreading for three years: Louis Jones Richardson, Carter's mother, has passed away in her sleep. The funeral will be on Monday in her hometown of Albany, Georgia.

With that, Nick is determined to find a way to get into Georgia since, in 1953, he and Carter signed an agreement they wouldn't enter the state without permission. And, in spite of the sad circumstances, neither the district attorney in Albany nor the state's attorney general are inclined to let them in.

Help comes in the form of two of their operatives: Tom Jarrell and Ronnie Grisham.

Meeting up in Miami on Thanksgiving Day, the four of them make the trek north and surreptitiously cross the Georgia-Florida state line in the early morning hours of Friday.

At Belle Terre, a plantation-style house nestled between cotton fields and the banks of the Flint River south of Albany, Nick and Carter begin to play hosts to friends and family who come by to pay their respects, since neither man will be able to safely show their faces on the day of the funeral.

But then something unexpected happens that turns a time for grieving into a devastating tragedy...

Justanotherreview
5,0 van 5 sterren I hate Albany but that’s the point
4 februari 2019 - Gepubliceerd op Amazon.com
Geverifieerde aankoop
Carter’s mother, Louise, has died and she wants to be buried in Albany, Georgia. It’s hard to fathom why. She hasn’t lived there in a long time. None of her family lives there. Carter’s dead father didn’t seem like the love of her life. To be near the grave of Carter’s brother? Who knows.

Carter and Nick have to go there. Or they choose to go there. When it comes to death, home, and family, everything gets muddled up. They can’t enter the state without permission. (Quick quiz: what book was that from?) So they sneak in and hole up in a mansion out of town.

Carter is as unhappy as we have ever seen him. His moroseness spills over into most of the book. Still, he seems to delight in tiny moments like the Indian motorcycle. Carter is resilient and we’re left with the certainty that Carter will weather this tragedy.

There were a fair number of celebrity drop ins. Among them is Cary Grant, who knew Louise. Rosalind Russell is battling breast cancer that would eventually take her a decade later.

Tom and Ronnie from the Daytona Beach story cross over and take on major roles in the book. I was ambivalent about the plot before I read the book. I thought there’d be spoilers because it’s set almost 20 years after the books that have been published in that series. I’m happy to admit that I was wrong. The mentions of their lives only served to ake me look forward to more books in the Daytona Beach stories.

In many ways, this feels like a “reset” book after the previous 3-book arc. Nick & Carter reorganize the vast company they own. Their family relationships change. Parnell’s love for his son shines through. At the end, there’s the feeling that the world is their oyster and they don’t know where they’ll go next.

Did I enjoy the Albany, Georgia tale? Not one bit (well, except for the Indian motorcycle part). Despite that it was a gripping, intense book. After all, hating Albany is the point.

Ulysses Grant Dietz
5,0 van 5 sterren From darkest depths to the heights of joy and love - all with humor and wisdom.
7 maart 2019 - Gepubliceerd op Amazon.com
Geverifieerde aankoop
I’m not giving this five stars because it’s better than any of the other books. I’m doing it because I continue to be astounded at the emotional punch this ongoing saga has for me. The plot of this book makes little sense outside the context of the rest of the series – the accumulated narrative that has turned Nick and Carter’s life into an epic Netflix series (at some six seasons now, I’ve calculated). Some of this has to do with the fact that it stirs up memories of my childhood at this point, since I was ten years old when the action in this book takes place. Mostly, however, it is simply Butterfield’s knack for putting his finger on the key points.

Toward the end of the book, Carter quotes the abolitionist Theodore Parker:

“I do not pretend to understand the moral universe; the arc is a long one, my eye reaches but little ways; […] I can divine it by conscience. And from what I see I am sure it bends towards justice.”

It’s a quotation that I’ve read twice this week, and it always moves me to tears with its tender faith in the basic goodness of humankind.

Once again, the author takes us on a rollercoaster ride, first to sadness in the darkest heart of American racism, and thence to the heights of love and compassion. There is sorrow, and joy, and danger, and humor, and always the essential necessity of Nick and Carter’s increasingly wide network of gay men and women – a family who act as a kind of queer “iron shield” against the injustice and bigotry that seems to rule the world.

Nick has to face some hard facts about the truth of the life he and Carter have chosen to live – good truth and bad truth. The author reminds us that Nick and Carter are fantasy figures – a vastly rich gay couple so well known that Hollywood celebrities go out of their way to introduce themselves (such a delightful moment). As always, Butterfield has fun mixing up fact and fiction, but the biggest fiction is that a couple like these two simply could not have existed in this period; because if they had, the world would have changed faster than it ultimately did.

Kudos to the author for being so sensitive in matters of race and ethnicity here. He shows a delicate touch that many authors, even high-minded ones, lose sight of in their desire to paint their heroes in a positive light. Some of the toughest passages in the narrative just made me love Nick and Carter more.

Interesting to note that Nick and Carter both use the term “gay” without thinking. As it should be. We’re only four years before Stonewall, and ten years before I met my husband.
Meer lezen
6 mensen vonden dit nuttig
Vertaal recensie in het Nederlands

Geoff Whitwell
5,0 van 5 sterren What an emotional roller coaster ride
7 februari 2019 - Gepubliceerd op Amazon.com
Geverifieerde aankoop
This episode in the lives of Nick and Carter really tug at the emotions. We deal with death, racism, family reunions and old friends seeming to appear and disappear in thin air leaving unanswered questions and chaos behind them. Frank as always leads us through this incredible journey, making the reader feel as if they are right there along for the ride. Every book ending leaves openings for what might happen next and an incredible thirst for the next book to be published immediately rather than have to wait for the notification of its impending release.
Meer lezen
3 mensen vonden dit nuttig
Vertaal recensie in het Nederlands

Kindle Customer
5,0 van 5 sterren Another hit.
5 februari 2019 - Gepubliceerd op Amazon.com
Geverifieerde aankoop
Thankfully I had nothing important to do today because I can never put your books down. I love the stories of Nick and Carter. I can't wait till the next one. Thank you Mr. Butterfield
Meer lezen
3 mensen vonden dit nuttig
Vertaal recensie in het Nederlands