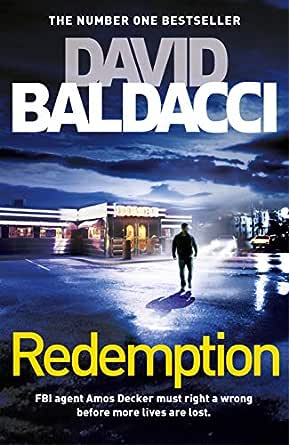 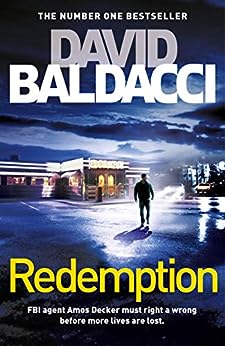 "A compelling puzzler...Baldacci is a truly gifted storyteller, and this novel is a perfect "fix" for the thriller aficionado."--Associated Press on The Fix


"Decker is one of the most unusual detectives any novelist has dreamed up...a master class on the bestseller....Highly entertaining."--Washington Post

"Crackling with tension...Reads at a breakneck pace...Bestselling author David Baldacci delivers a thrill ride, as always. Big time. Pick up THE FIX, and you won't put it down until you reach the end. Guaranteed."--BookReporter.com on The Fix

"Perennial bestseller Baldacci unveils an offbeat hero with an unusual skill set and tragic past who takes on the evil mastermind behind a devastating school shooting..[Decker] proves a quirky, original antihero with a definite method to his madness...Readers will want to see Decker back on the printed page again and again."--Kirkus Reviews on Memory Man


"Baldacci's novels always have an emotional component...But MEMORY MAN stands out among his thrillers for its deeply felt - and earned - sense of catharsis and healing...Baldacci's last few books have been among his best, and it's a pleasure to see him produce emotionally and dramatically intense work at the height of his maturity as a novelist."--Richmond Times-Dispatch on Memory Man


PRAISE FOR THE MEMORY MAN SERIES: "Baldacci is a wonderful storyteller, and he incorporates wonderful characters into baffling conspiracies....He takes on small-town America, capturing both good and bad elements. He demonstrates why these small towns are worth saving. It's a theme he has explored before, but it still has potency and relevance."--Associated Press on The Fallen


"Little by little he thaws the case out, exposing a town full of secrets that have far-reaching, international ramifications. Redemption's unusual plot will have you wanting to step back and say 'wait a minute.' But then you remember, this is David Baldacci, the master storyteller, and you keep turning the pages."--The Florida Times Union

"Staying true to its title, Redemption is a riveting thriller, as relentlessly suspenseful as it is blisteringly original. Baldacci may be an old hand at this but his grasp has never been stronger."--Providence Journal

"Baldacci turns up the suspense and surprises at a rapid pace in Redemption without sacrificing character or story. With the personal stakes and the steep learning curve that Decker must overcome to find justice, the narrative carries a heavier emotional impact. Essentially, this is another great novel from a master storyteller."--Associated Press

"Amos Decker is an amazing character. Reading how Decker journeys from hitting rock bottom to finding ultimate redemption is nothing short of rewarding."--Associated Press

FBI consultant Amos Decker returns to the scene of a family tragedy, and is confronted by more than just painful memories.

A felon on a mission.

When Decker returns to Burlington, Ohio, he is tracked down by his first homicide arrest, Meryl Hawkins, a man who still maintains his innocence.

With Hawkins recently released from his life sentence, Decker finds himself questioning what had once seemed watertight evidence. Is the real killer still out there?

A murderer at large.

As the body count rises in a new crime spree, Decker and his former partner Mary Lancaster dig deeper and reopen the old case – and old wounds.

Back in his home town and plagued by the ghosts of his past, Amos Decker is compelled to discover the confronting truth in the fifth Memory Man thriller of David Baldacci’s number one bestselling series.

Cyrus Webb
5,0 van 5 sterren In REDEMPTION David Baldacci shows Detective Decker is about what's right, not being right
16 april 2019 - Gepubliceerd op Amazon.com
Geverifieerde aankoop
Like so many readers I have enjoyed the way author David Baldacci has crafted adventures around Detective Amos Decker. Now with REDEMPTION we are able to see him deal with something that is not really part of his profile: the possibility of being wrong.

This book takes us into his grappling with the fact that he might have been instrumental in sending a man to prison that is actually innocent, and with the clock racing against them both Decker goes back to either prove he was right or to right a wong.

Through the book there are the usual interactions we have come to know with Decker and some of the other characters. With Sally we get reminders of how he is viewed by others, and even by himself. But we also get the somber moments when he reflects on what he has lost and what really drives him: the search for truth.

Will he be able to show he got it right or will he be allowed to free an innocent man and make sure a killer is brought to justice? That is the road we travel in REDEMPTION, and each chapter prepares you for the surprises that are to come.
Meer lezen
73 mensen vonden dit nuttig
Vertaal recensie in het Nederlands

Sharon R -- A Regular Gal
5,0 van 5 sterren Excellent Book - Really Couldn't Put it Down
20 april 2019 - Gepubliceerd op Amazon.com
Geverifieerde aankoop
I really enjoyed this latest outing in the Amos Decker series. I wasn't all that crazy about the last book in this series but this one more than lived up to my expectations. There were a couple of clues in the book I sussed out before Decker (having to do with a print left behind at an old crime scene and something fishy about a diner that features heavily in this book). I'm not sure if that more of a commentary about Baldacci's writing or more that maybe I have finally read so many mystery novels I'm figuring out the clues earlier, haha.

I was pretty sure about halfway through that I had figured out the bulk of the mystery, but I was completely wrong. And then about three-quarters of the way through I was certain I had figured out the main reason behind the murders and again, I was wrong, haha. So all of that is to say that there were a lot of twists and turns along the way and I found I just could not put this book down until I got to the end, which featured several surprises.

Really good book and I love it when an author as well known as Baldacci doesn't get complacent after he's made it big. Can't wait for the next book in this series!
Meer lezen
56 mensen vonden dit nuttig
Vertaal recensie in het Nederlands

Tired Turtle
5,0 van 5 sterren Baldacci’s Amos Decker never disappoints. Another winner in the series.
20 april 2019 - Gepubliceerd op Amazon.com
Geverifieerde aankoop
Amos Decker is back in another solid offering from Baldacci. Many twists of plot with interesting villains to challenge all of Decker’s analytical abilities. Surprises abound in his small hometown as he pays his annual visit to the graves of his wife and daughter. Murders aplenty, treachery, lies and stonewalling adversaries keeps one’s interest till the mystery is solved.
Meer lezen
36 mensen vonden dit nuttig
Vertaal recensie in het Nederlands

LaLise F
3,0 van 5 sterren Disappointed in this 5th Memory Man book
30 april 2019 - Gepubliceerd op Amazon.com
Geverifieerde aankoop
I loved the previous four books in the memory man series. To me, this 5th book was a disappointment and not up to the usual Baldacci writing. Amos is back in his hometown of Ohio to visit his wife and daughter's graves. Once his partner, Jamison, leaves to return to the FBI, it is Amos and his old police partner trying to figure out a crime committed 10 years ago. The book added no new depth to the memory man, even when his friend Melvin Mars showed up, I felt he was very shallow and did not add much to the story. Much of the story line was spent summarizing Amos Decker, what happened to him and his family and why he is the way he is. I suppose that is necessary for the reader who is reading the memory man for the first time, but I found it distracting. The storyline itself felt formula driven and so similar to the 4th book (all about what happened in Baronville, which was a great story) that this 5th book seemed dull and repetitive to me. Bottom line, I could have skipped reading this story and not felt that I missed something important in the memory man's life. I will look forward to reading Baldacci's next book in this series, and hope that he steps us the storyline.
Meer lezen
34 mensen vonden dit nuttig
Vertaal recensie in het Nederlands

lighthouse88
5,0 van 5 sterren Keep the series and charachters going!
25 april 2019 - Gepubliceerd op Amazon.com
Geverifieerde aankoop
If you haven’t yet delved into the world of Memory Man’s main character, Amos Decker, you’re missing out! While each novel can be read as a standalone, for me it worked better to read from the first book to date. I enjoyed seeing how Amos was growing as an FBI agent and as a man who suffered a head injury via the NFL.
The series introduces Amos when he returns home in book one titled, Memory Man, to learn of the murders of his wife and daughter. From there, Amos spirals into a pit of darkness both professionally and in his personal life. What was really gripping in the latest novel was the way the author wove a mystery. Readers get a hint early as to who is the culprit only to learn…well, I won’t say so as not to ruin it for you who haven’t enjoyed it as of yet.
The author has written a very engaging and riveting tale that kept me turning pages for hours. There were intricacies that made the story a surprise in the direction it takes and reveals a deeper plot than what is first apparent to the eye. Amos is changing since his appearance in book one and in many ways, he is also the same. There were a few heart touching-moments as I read parts that revealed Amos’s internal struggles and thoughts. Amos Decker is definitely a deep thinker. His personality quirks are at times frustrating to other characters but also endearing.
I think readers will enjoy watching Amos Decker as he solves crimes, bucks the system and learns to live with loss. The series starts with Memory Man followed by The Last Mile, The Fix, The Fallen and now Redemption. Suspense, mystery, intrigue, and more fill the pages and will keep your nose in the book all the while engaging your mind as you try and solve the puzzle presented in each installment.
I highly recommend starting at the beginning to really appreciate the character as he changes, grows and in some ways remains the Amos from the first book to the fifth. I hope the author plans more exciting adventures for Amos!
Meer lezen
25 mensen vonden dit nuttig
Vertaal recensie in het Nederlands
Ga naar Amazon.com om alle 1.612 recensies te bekijken 4,6 van 5 sterren
Terug naar boven
Over ons
Verkoop bij ons
We helpen je graag
© 1996-2020, Amazon.com, Inc. en dochterondernemingen