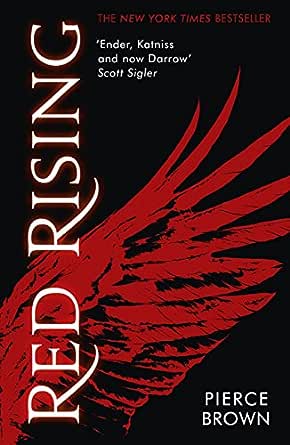 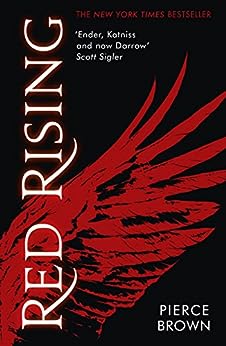 "Red Rising is a sophisticated vision. . . . Brown will find a devoted audience."--Richmond Times-Dispatch "A story of vengeance, warfare and the quest for power . . . reminiscent of The Hunger Games and Game of Thrones."--Kirkus Reviews

"Fast-paced, gripping, well-written--the sort of book you cannot put down. I am already on the lookout for the next one."--Terry Brooks, New York Times bestselling author of The Sword of Shannara

"Pierce Brown has done an astounding job at delivering a powerful piece of literature that will definitely make a mark in the minds of readers."--The Huffington Post

"Compulsively readable and exceedingly entertaining . . . a must for both fans of classic sci-fi and fervent followers of new school dystopian epics."--Examiner "[A] great debut . . . The author gathers a spread of elements together in much the same way George R. R. Martin does."--Tordotcom "Very ambitious . . . a natural for Hunger Games fans of all ages."--Booklist "Ender, Katniss, and now Darrow: Pierce Brown's empire-crushing debut is a sprawling vision."--Scott Sigler, New York Times bestselling author of Pandemic

"A Hollywood-ready story with plenty of action and thrills."--Publishers Weekly

NEW YORK TIMES BESTSELLER NAMED ONE OF THE BEST BOOKS OF THE YEAR BY ENTERTAINMENT WEEKLY, BUZZFEED, GOODREADS AND SHELF AWARENESS

Pierce Brown's heart-pounding debut is the first book in a spectacular series that combines the drama of Game of Thrones with the epic scope of Star Wars.

Darrow is a Helldiver. A pioneer of Mars.

Born to slave beneath the earth so that one day, future generations might live above it.

He is a Red - humankind's lowest caste. But he has something the Golds - the ruthless ruling class - will never understand.

He has a wife he worships, a family who give him strength. He has love.

And when they take that from him, all that remains is revenge . . .

CountessMC
5,0 van 5 sterren Slayed me
17 juli 2017 - Gepubliceerd op Amazon.com
Geverifieerde aankoop
Confession: When this first came out, I actually shunned it just because of all the buzz and hype because I am such a contrarian. The masses couldn't possibly be right, can they? Yes, I was acting a little bit of a Gold. Plus the description just sounded like every other would be Hunger Games dystopian novel out there - derivative and ... a society stratified by colors, really?

And yet one day, four days ago to be exact, a copy happened to fall into my lap and upon reading the first page I was instantly, irrevocably HOOKED. I write this now having ripped through the entire trilogy in THREE DAYS.

Did I surreptitiously read it on my phone at work? YES. Did I battle exhaustion trying to read one more chapter into the late, late night despite loving sleep almost as much as chocolate? YES. Did I pounce on every vaguely bookish person I know and blather with the crazed look and incoherence of a fanatic about this novel, despite not even being a sci-fi reader? YES.

Don't be put off by the proliferation of all caps in my review. I haven't been this excited about a book in such a long time, plus I was in a bit of a reading slump, having been adrift in a sea of discarded books. So you must forgive me.

Okay, I will concede that the comparisons to Hunger Games and the Lord of the Flies have merit. Not only that, there are heavy Greek and Roman allusions. There are recognizable, familiar elements. This is after all a classic Hero's Journey. The lowly Darrow, motivated by grief and revenge manages to rise to the highest strata - to even the realm of the gods.

It is not original and yet it is. Like Sevro and the Howlers and the rest of the House of Mars, I want to follow Darrow and see what next audacious step he takes. I was constantly surprised, on the edge of my seat trying to see how he would win or recover from a failure.

I'll admit there are problems. The female characters do not seem fully realized. There's a helluva lot of rape going on. But even with its flaws, Red Rising slayed me. I was all in from the first line to the last. I got the next book after a hundred pages in.

One thing I am thankful for, having come into this series rather late is that I had the entire trilogy at my disposal, reading one right after the other, without that agonizing long wait in between.

Alice
1,0 van 5 sterren Can't believe I paid money to read this.
10 juli 2018 - Gepubliceerd op Amazon.com
Geverifieerde aankoop
The book is derivative, tediously written, pandering. It is written from a point of view of an irritating 16 year old boy for irritating 14 year old boys and reads like it came out in 1954, not 2014.
Meer lezen
44 mensen vonden dit nuttig
Vertaal recensie in het Nederlands

Ralph
4,0 van 5 sterren who through genetic and surgical manipulation have evolved as superior human beings
23 januari 2017 - Gepubliceerd op Amazon.com
Geverifieerde aankoop
Red Rising is the first book of the Red Rising Trilogy. It is a science fiction story about a dystopian society set on a terraformed Mars.

Society in Red Rising is a caste system (based upon birth), where the inhabitants fall into a hierarchy of 14 “colors” representing their ranking within society. At the top of the hierarchy are the Golds, who through genetic and surgical manipulation have evolved as superior human beings. At the bottom of the hierarchy are the Reds, who are unskilled manual laborers, conditioned to a brutal environment. The remainder of society falls into one of the other “colors” that fill a specific need within society.

Red Rising focuses on the Golds and Reds: the Golds rule society with an iron fist and no compassion; the Reds toil all day in their underground city where they remain miners from generation to generation. These Reds have no actual knowledge of the rest of society; they have been deceived into believing that by mining helium-3 they are making the surface of Mars livable for future generations. In reality, Mars and the rest of the solar system had been successfully colonized centuries earlier. The Golds control not only what and where the Reds live and work, but what they know. Our hero, Darrow, is a Red. He and the Reds like him are essentially slaves to a decadent ruling class, enslaved for generation after generation with no voice and no hope.

But there are those who have learned the truth and want change. The story takes shape as Darrow is rescued by a group of rebels known as The Sons of Ares; Darrow has been selected to infiltrate the Golds at its highest levels.

The book is fast paced and exciting, although it takes roughly two thirds of the book to establish the backstory. This is both a positive and a negative: it takes a long time to get to the exciting part, but one of the things I liked about this book is the in-depth character development and backstory. I gave this book a rating of four out of five due to the excellent character development and backstory, and the quick pace once it reached its stride.
Meer lezen
47 mensen vonden dit nuttig
Vertaal recensie in het Nederlands

Melissa
1,0 van 5 sterren Would Not Recommend
28 februari 2019 - Gepubliceerd op Amazon.com
Geverifieerde aankoop
Let me start by acknowledging that I'm probably not the target audience for this book. I feel like it aims fairly strictly for young boys in the way that Twilight aims for young girls. If you did enjoy this book and you don't fit the target audience that's fine too, but for me it was just a waste of time.

"Red Rising" struck me overly lofty, sanctimonious, and obsessively violent. The main character seemed to just kind of morph into whatever he needed to be for the plot to continue without a real feeling of growth. Phrases like "I screamed like a rage god" made me cringe. Everything before all of the teenagers were thrown into their death camp felt like a preamble, with occasional interesting world building elements thrown in. There were definitely times where it felt like the book was relishing in the deaths of characters, trying a little too hard to make the reader feel loss for someone we didn't have enough time to get attached to.