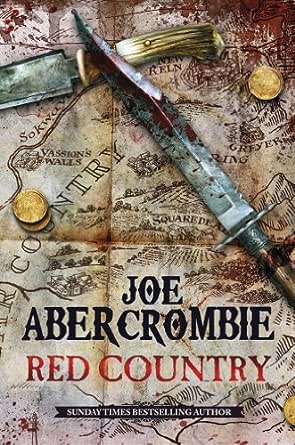 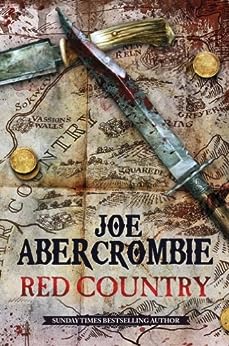 "Magnificent, richly entertaining"--Time on The Heroes

"Imagine The Lord of the Rings as directed by Kurosawa."--Lev Grossman, Wall Street Journal on The Heroes

"[Abercrombie has] begun breaking his own rules. And succeeding wildly at it. ... [R]arely has Abercrombie had so much fun while rollicking through his colorful cast's foibles and witty dialogue - and rarely has he dished out so much straight-for-the-heart poignancy."--The A.V. Club

"Exhilarating... Abercrombie's knack for wit and grit holds your attention throughout, and his eye for character means that there's heart as well as muscle."--SFX (UK)

"Abercrombie writes fantasy like no one else."--The Guardian (UK)

They burned her home.

They stole her brother and sister.

But vengeance is following.

Shy South hoped to bury her bloody past and ride away smiling, but she'll have to sharpen up some bad old ways to get her family back, and she's not a woman to flinch from what needs doing. She sets off in pursuit with only a pair of oxen and her cowardly old stepfather Lamb for company. But it turns out Lamb's buried a bloody past of his own, and out in the lawless Far Country, the past never stays buried.

Their journey will take them across the barren plains to a frontier town gripped by gold fever, through feud, duel and massacre, high into the unmapped mountains to a reckoning with the Ghosts. Even worse, it will force them into alliance with Nicomo Cosca, infamous soldier of fortune, and his feckless lawyer Temple, two men no one should ever have to trust...

The past never stays buried...

Josh Mauthe
5,0 van 5 sterren THE FIRST LAW meets UNFORGIVEN in a brutal fantasy Western that meditates on violence and redemption
7 oktober 2018 - Gepubliceerd op Amazon.com
Geverifieerde aankoop
I was a huge fan of Joe Abercrombie's The First Law trilogy, a dark, grounded fantasy about a series of deeply flawed antiheroes, each of which struggled with their own shortcomings and weaknesses in an effort to do something greater. What resulted, though, was a pretty unflinchingly dark series about violence and cruelty, showing how hard it is to change, and how the world cares little for intentions in the face of power and will. The whole trilogy was epic, rich, character-driven, and stark, delivering rich writing, complex worldbuilding, and satisfying character arcs that struggled with questions of redemption, forgiveness, guilt, and change.

While The First Law is a self-contained series, that didn't stop Abercrombie from writing more stories set in that world. And while I haven't read any of the others, if they're even half as good as the incredible Red Country, I need to read them post-haste.

It won't take you long to realize that Red Country is Abercrombie's take on the Western genre, even with its fantasy trappings. Opening on a town far away from the cities of The First Law, Abercrombie shows us weathered, hardscrabble men and women who have left behind the comforts of "civilization" for the new frontiers of the Far Country. Some are looking for gold and new wealth; some are leaving behind their old lives in hopes of a fresh start; some are businessmen, looking for towns where they can make their fortune; and some are soldiers of fortune, expanding the Empire by force and crushing any thought of rebellion among those who might be using the lack of central authority to make their own power.

It's familiar fare, done with Abercrombie's usual rich writing, dark humor, and complex characterization. And when the young siblings of a woman named Shy South get kidnapped by raiders and sold to a tribe, it's easy to think that Abercrombie is going for a Searchers homage here. Here's the uneasy relationship between profit, racism, and violence; here's characters whose lives of violence have led them to indulge their worst tendencies; here's questions about the relationship between "civilization" and "savage" and which is the case.

But then, in the space of one line, Abercrombie made me realize that what I was reading wasn't The Searchers; it was Unforgiven - a study of a lifetime of violence, of what it does to the soul, and whether there's any returning from it. Oh, there are other elements at play here - the exploration of frontier towns will remind any Western fan of the seedy anarchy that Deadwood gave us in its first season, and that Searchers feel never quite goes away - but in true Abercrombie fashion, this is a story about violence and those who deal it out.

(This is the part where I mention that, while you don't have to read The First Law to appreciate Red Country, it definitely will increase the book's greatness. While Red Country entirely stands alone, there is an aspect of the book that is deeply informed by the events of that series and is never spelled out in Red Country's pages. It gives the events we're watching a whole different feel, and undeniably raises the tension of what we're reading as we wait for that shoe to drop.)

There's a lot going on here - Abercrombie follows several major characters as they interweave, and alternates third-person limited narration between them (although we are never given a window into the mind of one key player, interestingly, leaving him defined entirely by his actions). And while the story starts simply enough - with the pursuit of these kidnapped children - there's so much more going on, including the fate of the tribes who inhabited this land before "civilization" came along, a fight for self-sovereignty, a crew of mercenaries destroying everything in their path...

...and yet, what makes Red Country great is none of that. No, what makes it great are the character arcs, as Abercrombie does something he never was able to do in The First Law: he lets them attempt to find redemption and absolution from their sins, as they grapple with their pasts and look inward to see if change is possible. Does Abercrombie give us easy answers? Unequivocally no - this is a hard book, with brutal violence, characters who let us down, and changes for the worse. But he never forgets that the quest for redemption is important in of itself, and maybe worth doing, even if it's never quite possible. And as we watch these characters struggling through the darkness and attempting to find any light to cling to, Abercrombie finds their dignity and humanity, even while keeping true to the broken people they are.

Red Country is an absolute knockout - it's riveting, exciting, brutal, surprising, and completely gripping, but more than that, it's satisfyingly rich, both in terms of the world we're seeing and - more importantly - in terms of the characters we're meeting. It's everything I loved about The First Law but even more so, giving me unforgettable characters and a final scene that couldn't be more perfect in how it draws together the themes of the book. The First Law was stunning, but this is something truly special. A must for any fantasy fan, but also for anyone interested in how you tell the story of an antihero.

F. Fievet
1,0 van 5 sterren Now I Remember
22 juli 2019 - Gepubliceerd op Amazon.com
Geverifieerde aankoop
Speaking to a friend recently, he recommended that I look into Joe Abercrombie's work. The First Law trilogy gets a lot of hype so I said I absolutely would. Reading a brief recap of the plot for The Blade Itself, I recognized a name or two and then Logen popped up and it was a "oh yeah, I read that series about a year ago, that was a fun character". And there began the problems.

Three books a little over a year ago and I could barely recall anything of the plot or characters beyond Logen. Figuring that maybe a handful of books later Abercrombie would improve on his world, I picked up Red Country. Nope, the only thing it brought back were the memories of painfully flat characters and stale, re-wrapped plots. There is literally no one that evolves in the books. Lamb is Eeyore throughout, Shy plays the hard edged tomboy, Temple... meh it's not even worth typing up as there's that little thought put into each character. They're summarized in a sentence and that's it. Even the flamboyant, idiotic sell sword captain gets stale very quickly.

The plot seems to borrow from First Law, small start, huge trek, climax. We spend an abhorrent amount of time toiling across a dusty plain that may be the only thing of the entire book that evokes any sense of scale. The rest of the time, you're beaten over the head with foreshadowing and supposed 'ah-ha' moments.

The worst part of the book is the ending, both in Crease and with Lamb. The Crease ending is shameful for the twist and the absolute silliness of it all. I was going to give the book two stars, until I reflected ever so slightly on how laughable it was. Guess no one was ever taught to look both ways when they cross the street. Lamb's ending was also yawn worthy in predictability.

Hopefully I'll learn my lesson and when someone throws Abercrombie's name out there as an author to read, I'll revisit this review and remind myself, DON'T DO IT!
Meer lezen
3 mensen vonden dit nuttig
Vertaal recensie in het Nederlands

Bryan Desmond
5,0 van 5 sterren Joe's strength has always been his characters, this book is no different.
1 oktober 2017 - Gepubliceerd op Amazon.com
Geverifieerde aankoop
Well there it is. I've read all of Joe's First Law books. Well, almost. I know that there's a short story collection floating around out there, the aptly titled 'Sharp Ends'. I'm going to save that one for some hellish Winter night when I really need some Abercrombie. With these three stand alone books (Best Served Cold, The Heroes, Red Country) Joe has solidified his place on my favorites shelf. He is an incredible Fantasy author, now I just need to pick which book to put on there. Regardless of which I choose, it will stand as a representative for his work on the First Law as a whole.

Now, Red Country. Fantastic book. Just great. A fun and wicked romp across the World of the First Law's 'Wild West'. New character fill the Near Country and are accentuated by the return of some old ones, one in particular that I was immensely pleased to see (though this character is never referred to by their true name, you'd have to be blind to misunderstand who we're dealing with here).

Joe's strength has always been his characters, this book is no different. They occupy a bleak world, filled with some nasty folks, and they deal with it the best they can. Sometimes you realize the characters you thought were the 'good guys' have been the nasty ones all along. Joe is good at that. He's good at bringing even the smallest character, with the least screen time, to life. It leaves things with a sort of open feel, like he could dive back in and write more about any section of the world and any small character he'd like at any time. Speaking of which, I've recently been made aware that Joe is hard at work on another trilogy set in the First Law World, further down the timeline. That news is the cherry on top of this read, and I'm eagerly awaiting it.
Meer lezen
6 mensen vonden dit nuttig
Vertaal recensie in het Nederlands
Ga naar Amazon.com om alle 568 recensies te bekijken 4,5 van 5 sterren
Terug naar boven
Over ons
Verkoop bij ons
We helpen je graag
© 1996-2020, Amazon.com, Inc. en dochterondernemingen