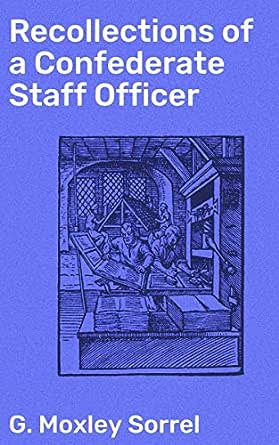 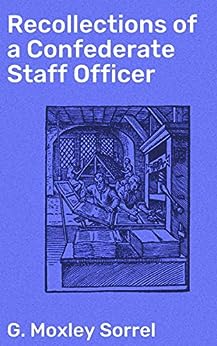 "Recollections of a Confederate Staff Officer" by G. Moxley Sorrel. Published by Good Press. Good Press publishes a wide range of titles that encompasses every genre. From well-known classics & literary fiction and non-fiction to forgotten−or yet undiscovered gems−of world literature, we issue the books that need to be read. Each Good Press edition has been meticulously edited and formatted to boost readability for all e-readers and devices. Our goal is to produce eBooks that are user-friendly and accessible to everyone in a high-quality digital format.

This scarce antiquarian book is a facsimile reprint of the original. Due to its age, it may contain imperfections such as marks, notations, marginalia and flawed pages. Because we believe this work is culturally important, we have made it available as part of our commitment for protecting, preserving, and promoting the world's literature in affordable, high quality, modern editions that are true to the original work.
click to open popover

M. G Watson
5,0 van 5 sterren Moxley!
1 april 2018 - Gepubliceerd op Amazon.com
Geverifieerde aankoop
Coming off reading Col. John S. Mosby's "Memoirs," I was a little apprehensive about buying this book. It looked to be another of those privately-published, poorly edited re-issues which are a struggle to get through despite their short length. Nothing could have been further from the truth. This is an easy, pleasant, often touching read which gives a very interesting account of the Civil War as viewed by a man who saw it from its beginning to its end, always in the thick of the action. If you want to "be there," this book will put you there, in the strange and fantastical atmosphere of that great time.

When the War broke out in April of 1861, G. Moxley Sorrel was working as a bank clerk in Savannah. He slipped away to watch Fort Sumter fall, then promptly offered his services to the new Confederacy. In short order he found himself working as a staff officer for James Longstreet, then a brigade commander. It was the beginning of a long and fruitful partnership that lasted 'til the end of the war. Longstreet, who eventually rose to the command of the famous First Corps of the Army of Northern Virginia, and was known as Lee's "War Horse," not only participated in nearly every major battle fought in the East during the conflict, he also fought with the Army of the Tennessee in 1863, and helped win the Battle of Chickamauga. Returning to Virginia in early '64, Sorrel was at Longstreet's side for the terrible fighting at the Wilderness and participated in the fighting there, gaining fame for a charge he led against Hancock's corps which won the first day of the battle for Lee. He continued his service, rising to the rank of brigadier general, and commanded troops in the field (Georgians, of course) before wounds took him away from the siege of Petersberg. On his way back to rejoin Lee in April of '65, he heard the news of Lee's surrender, which ended a meteoric military career and returned him to civilian life and an uncertain future.

It should be noted here that Sorrel, who was very old when he penned these pages, makes no attempt to consult with history books or even letters or papers written during the war, but simply pours out his thoughts as they occurred to him. This makes the book very loose on dates, geography, orders of battle, etc., etc. but contributes to its clarity and readability. He is by no means attempting a history of the war or the campaigns he served in, but rather his own personal memories and recollections which he thinks will be of interest to the reader. This includes many humorous anecdotes (such as his tendency to get swindled in horse-trading), and some disturbing ones (the tendency of Southern generals to feud bitterly with each other, even to the point of dueling) as well as a real look as to the character, mentality and ability of many Confederate leaders, including Lee, Jackson, Longstreet, Stuart, Bragg, Early, the Hills, etc., etc. as Sorrel saw them. Anyone familiar with Shaara's novel "The Killer Angels" will quickly realize that he depended very heavily on Sorrel's accounts of Longstreet generally and Gettysburg specifically to write that famous work; his fingerprints are also all over Shelby Foote's masterful Civil War series super-popularized by Ken Burns' documentary.

To be sure, Civil War buffs and historians may take issue with some of Sorrel's conclusions. He places the blame for Gettysburg entirely on Jeb Stuart, which is why Jack Mosby spent half of his own memoir (above-mentioned), defending Stuart's reputation and blaming Sorrel and others on the staff for sullying it; and he avoids criticisms of some generals who probably deserved more of it, like Joe Johnston and Leonidas "Bishop" Polk.
By and large, though, it's hard to argue with a man who was "there" -- and Sorrel was always "there," except when his wounds prevented it. He comes off as a decent, fun-loving, thoroughly conscientious and brave man who bore no rancor toward his enemies and accepted defeat as graciously as he had accepted victory. When he died, a British military observer named Freemantle, who had been present at Gettysburg, wrote this touching passage which probably summed up how many felt in regards to Moxley Sorrel:

"His gallant clay is lying in the cemetery at Savannah, the long, pendulant southern moss laying softly over it. His 'Recollections of a Confederate Staff Officer' has for me, like all books I love, a low, natural, wild music; and as sure as I live, the spirits who dwell in that self-sewn grove called literature were by his side, were with him when we wrote the last pages, his pen keeping in step with his beating heart."

Don Kidwell
4,0 van 5 sterren Want More 'Bang' For Your Bucks?
28 augustus 2016 - Gepubliceerd op Amazon.com
Geverifieerde aankoop
Consider these other books of the Confederacy that will cost you little if any any coin currently

1)At Gettysburg, or, What a Girl Saw and Heard of the Battle (Illustrated) ASIN: B01J3NHII6
2)The Memoirs of Colonel John S. Mosby ASIN: B017BME19U
3)Hardtack and Coffee or The Unwritten Story of Army Life ASIN: B01DFQFUZA
4)Andersonville A Story of Rebel Military Prisons (Illustrated)ASIN: B01N9D9COP
5)Personal Recollections of a Cavalryman With Custer's Michigan Cavalry Brigade in the Civil War ASIN: B004TQGHA8

Fine Historical reads for free so long as you fetch them fast - I like it!
Meer lezen
9 mensen vonden dit nuttig
Vertaal recensie in het Nederlands

Big Jim
5,0 van 5 sterren A Very Enjoyable Book to Read
28 augustus 2019 - Gepubliceerd op Amazon.com
Geverifieerde aankoop
G. Moxley Sorrell was a true Southern gentleman who served on Longstreet's staff, Longstreet was a southern general I didn't know much about. From reading this book, I am now a big fan. Cordell calls it like he sees it. Some folks, he absolutely scored (Lee, Longstreet) and others, he does not have much use for (Bragg). Very enlightening and informative. I give it my highest rating!
Meer lezen
Een iemand vond dit nuttig
Vertaal recensie in het Nederlands

Xavier Baldwin
5,0 van 5 sterren Recollections of a Confederate Staff Officer
30 november 2019 - Gepubliceerd op Amazon.com
Geverifieerde aankoop
General Sorrel gives a well written and interesting narrative of his service with General James Longstreet. I really liked his description of the qualities and failings of the various Southern officers he served with. General Sorrel’s great admiration and devotion to General Longstreet and General Lee comes through loud and clear. It is clear that General Lee was an exceptional man and leader in every way and respected and loved by his soldiers and all who knew him! Really enjoyed this book.
Meer lezen
Vertaal recensie in het Nederlands
Ga naar Amazon.com om alle 67 recensies te bekijken 4,4 van 5 sterren
Terug naar boven
Over ons
Verkoop bij ons
We helpen je graag
© 1996-2020, Amazon.com, Inc. en dochterondernemingen