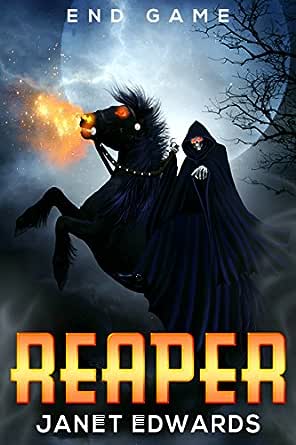 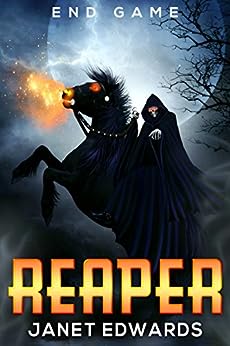 In the year 2519, people on Earth don't grow old and die any longer, their bodies are frozen and they start a new life in the virtual reality of the global game.

Jex is almost eighteen, working twelve hour shifts, and dreaming of when she'll be legally adult and begin her long-planned idyllic life in one of hundreds of wildly differing virtual worlds. When a bomber attacks a server complex, one of the virtual worlds crashes, and eleven thousand immortal players die during emergency defrost. Death has struck for the first time in centuries, and Jex is questioned as a suspect in the bombing.

With this on her record, Jex will never be allowed to enter the global game, but then a 400-year-old legendary player offers her the chance to join his investigation into the bombing. Jex must help Hawk catch the true bomber to protect the global game and save her own future. She joins a chase that will lead through real and virtual worlds, but the bomber has good reason to call himself the Reaper, and the heroic Hawk has his own secrets to hide.
click to open popover

I am not a SMURF
5,0 van 5 sterren I don't like science fiction
31 mei 2017 - Gepubliceerd op Amazon.com
Geverifieerde aankoop
I don't like science fiction. My sister will recommend some, finally wear me down, and I will try one, and fall into a world. She hooked me on WOOL. She slyly hooked me on Martian. And then the Earth Girl series (who knew Sci Fi could be feel-good?) And she has done it again by elliptically praising this book.

I've played MMOs since beta Vanilla. This book could be any well done MMO, even the behind the scenes is gritty, logical and real. )Okay, I confess to having been a GM in a small mmo, and having friends that were GMs in Sony's Vanguard and having been a beta tester in Warhammer Online. I found the "behind the scenes" bit about GMs accurate, and as a player, the mechanics of MMOs accurate yet broad enough it could be any MMORPG.

I really enjoyed this novel. Its meaty, complex, realistic in terms of gaming. I cannot speak to the science of it but it didn't irritating the snot out of me by not having a solid foundation of actual science or at least some kind of logical structure behind it.

There were some weak points in Ms Edward's first trilogy, mainly pacing, but with this novel I feel that she has found her stride. The pacing is excellent, and where I expected things to end, and maybe a chapter seque into the next book, the novel kept marching on relentlessly. This is a ripping yarn, a tale for gamers and even those who never played AD&D or an MMO.

Well done! I highly recommend this novel. I cannot wait for volume two. (Also, please release it the same time in the USA as the UK! I didn't enjoy changing countries to get Earth Flight! )

A. Shvarts
5,0 van 5 sterren Loved it, read it!!
10 maart 2020 - Gepubliceerd op Amazon.com
Geverifieerde aankoop
Love this Author. Own every book she wrote. An interesting twist to a very real future danger. This book will grab your interest and catapult you to a future that is filled with twists and turns on every page. Each chapter brings you closer to the mystery, with a gentle reminder that our present and future is close. Thanks for a sweet read. Can't wait for the next.
Meer lezen
Vertaal recensie in het Nederlands

Robert Shuler
5,0 van 5 sterren the no-copies virtual reality murder mystery
7 mei 2018 - Gepubliceerd op Amazon.com
Geverifieerde aankoop
I do not usually read virtual reality novels, or anything dystopian or with a cover like that. But I like this author so I downloaded the preview, and just kept reading. It is more like a mystery, and over half of it takes place in the real world. It is extremely thoughtful, but maybe not so realistic. The game in this case is a no-copies game. People's consciousness is removed from their bodies and cannot be copied. Of course, this makes for a more dramatic plot.
Meer lezen
Vertaal recensie in het Nederlands

E. Bellingan
5,0 van 5 sterren Game world amazing
8 mei 2017 - Gepubliceerd op Amazon.com
Geverifieerde aankoop
What an amazing creative interesting new world. Loved it so much. Janet Edwards really knows how to create these very engaging & interesting characters & world. Out of all her creations this is not a world I'd like to live in but am fascinated by it. It's again a cannot mis & a must read. You start & wont want to put the book down it's that engaging as always. The characters are great Jex, Nathan & hawk are amazing creations you invest in from the first chapter to the end.
Meer lezen
Vertaal recensie in het Nederlands

David Brims
5,0 van 5 sterren Another great novel!
22 december 2016 - Gepubliceerd op Amazon.com
Geverifieerde aankoop
I read this after reading Telepath, and was similarly impressed. It's another strong science-fiction story, with a brilliant setting, compelling characters, and a realistic romance that takes second place to the more important storyline elements, which is as it should be: I hate books where someone is trying to kill the main character but they're too busy mooning over a potential lover to worry about it. This was much more realistic. I loved it! All the characters felt realistic, and even the screwed up world they inhabited felt plausible. If anything, this story was even more realistic than Telepath, since there were no paranormal elements. I would add that a Gamer setting was used heavily, but it does not dominate the plot. You would not have to be into that sort of thing to enjoy this novel. You just need to enjoy good science-fiction with a dash of romance. Good book!