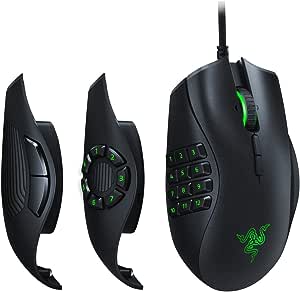 Experience the power of total control in your hand, no matter what game you play. Designed to provide you that edge you need in moba/mmo gameplay, the razer naga trinity lets you configure your mouse for everything from weapons to build customisations so you’ll always be ahead of the competition. The razer naga trinity is equipped with three interchangeable side plates that allow you to switch between two, seven and twelve-button configurations, depending on your in-game needs. With a 16,000 dpi 5g optical sensor, mouse movements are swift and executed exactly. Also, get access to even more commands with up to 19 programmable buttons. Designed with an enhanced right-handed form factor for comfort and well-positioned buttons for easy actuation, you can game for long hours without feeling the strain

Kevin
5,0 van 5 sterren Expensive, but...
4 juni 2020 - Gepubliceerd op Amazon.com
Geverifieerde aankoop
Only had this mouse for a little over a day. Took it out of the box and charged it, got busy and didn't start using it until last night. I can't explain how more responsive and better feel of it. Its like trying to explain the difference between blu ray and dvd. Its definitely there. Its also super comfortable in my hand. I had thought I would take off that side thumb rest but its actually really nice. I like the ability to adjust the scroll wheel resistance too but honestly I wouldn't pay extra for that.

The docking bay is cool, its weird how easily the mouse just rests on it. When putting it back at night I had to check a couple times to make sure it was on right. It was, I'm just going to have to trust that it magically just fits in when I haphazardly put it on.

The mouse is lighter than I would have expected. Not super light, but lighter than my previous generic logitech mouse and lighter than the M720. This most likely has to do with the lack of inserted batteries though.

Speaking of battery life, been working with it for about four hours now and its at 88%. The lights were on. I would have put a criticism about not being able to figure out how to turn them off but I just updated and suddenly the mouse showed up in the chroma program and I was able to turn them off.

The only real criticism I have is that when I press the scroll button (depressing the wheel), which I do often in a game I play to auto-run, it tends to scroll forward on click. I think its the placement of it and when I take my finger and press on it more from the front it doesn't do that so it'll be an adjustment.

I haven't played with all the little setting, macros, and customizations of the lighting. I probably paid a hefty price for something that I won't use with those but as far as what a mouse is supposed to do, it does it very well.

Ali
4,0 van 5 sterren RAZER BASILISK V2
19 juni 2020 - Gepubliceerd op Amazon.com
Although this product has a salty price it fully meets my requirements. From the first day of my purchase I became addicted to the "sensitivity clutch". I use it as a DPI lowering button when using a sniper. This mouse has other top features for me like it's sensor. The sensor comes with perfect technologies. Smart tracking, motion sync and being able to set the tracking distance were the essential points for me to buy this mouse. But there is one issue that I couldn't get comfortable with. And that is: when using the mouse with claw grip my ring finger places right next to the right click button and when I press, it pinches my finger a little bit and that makes me disturbed. But I think I will get used to it anyway. Overall this is a roughly expensive, functional and must-buy mouse.
Meer lezen
Vertaal recensie in het Nederlands