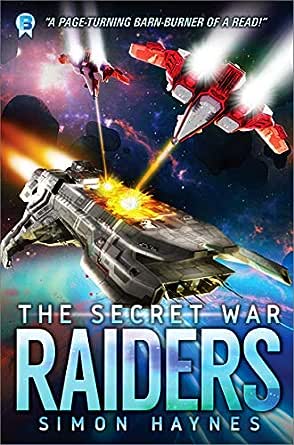 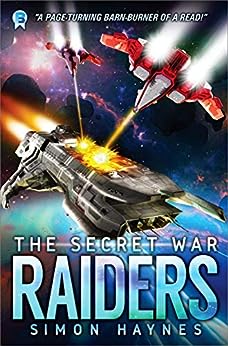 In a brutal interstellar war, how far would you go to save your family?

But something feels wrong, and Sam is determined to uncover the truth.

But will her investigation end in glory... or death?

Everyone has been scarred by the war, and Sam Willet is no exception. Sam is convinced she has what it takes to become a fighter pilot... to hunt down and destroy the enemy in deep space. Instead she's assigned to Tactical Operations training.It's vital work, but it's still a desk job, far from the front line. Then, terrible news: Sam's older brother is killed in combat. Sam is given leave to attend his memorial service, but she's barely boarded the transport when the enemy launches a surprise attack, striking far behind friendly lines to take the entire sector. Desperately short of pilots, the transport's captain asks Sam to step up. Now, at last, she has the chance to prove herself. But will that chance end in death... or glory? The Secret War: Raiders is a complete, standalone novel. It does not end on a cliffhanger.
click to open popover

Nathan Smith
5,0 van 5 sterren Meeting Sam Willett is like reading straight crack
21 juli 2019 - Gepubliceerd op Amazon.com
Geverifieerde aankoop
Sam Willitt is going to be a fighter pilot or die trying. Raiders is a page turning barn burner of a fast read. Meet Sam, and then stand back. From one battle to another Sam is going to avenge her brother Lim, and by God she's going to do it in a fighter. Explosive action and space battle follow young Sam like a devoted puppy, and Sam is only too happy to lead herself and anyone foolish enough to follow her into death or glory, and to be a fighter pilot, she is willing to accept either. A great read and I can't wait for the second in the series, Raiders to hit Amazon.
Meer lezen
Een iemand vond dit nuttig
Vertaal recensie in het Nederlands

spincast1123
3,0 van 5 sterren Yes, I do know it is SciFi.... but sometimes....
13 februari 2020 - Gepubliceerd op Amazon.com
Geverifieerde aankoop
There is just too much stretch of imagination.... Yup, there is luck and skill and then there is too much to believe. As a general book, it is alright but some of it goes too far. I do understand there is supposed to be a "suspension of belief but this takes it just a bit too far. I have to read on to volume 2, fingers crossed.
Meer lezen
Vertaal recensie in het Nederlands

Kindle Customer
2,0 van 5 sterren Not worth it
2 september 2019 - Gepubliceerd op Amazon.com
Geverifieerde aankoop
I obviously am not in the target demographic for this e-book. I think it is aimed at preteens raised on comics and cartoons. It started out okay, then slid into mediocre, then got worse. IT is possible that the author missed a couple of cliches however I won't swear to that. Two stars for grammar and spelling.
Meer lezen
Vertaal recensie in het Nederlands

M. James Cullinan, "startoter" and "sixpoints" my handles)
5,0 van 5 sterren One fantastic ride after another. Her name is Sam and she has a brother names Lim.
12 augustus 2019 - Gepubliceerd op Amazon.com
Geverifieerde aankoop
If you want to feel the fight that Sam flies then this is the book that takes you to new heights. I can not wait for my next book. Sam is far from the end of her adventures. So grab a flight suit, in your minds eye, and join in the thrills that await you. As for me it is no "skylarking"!
Meer lezen
Vertaal recensie in het Nederlands
Ga naar Amazon.com om alle 7 recensies te bekijken 3,9 van 5 sterren
Terug naar boven
Over ons
Verkoop bij ons
We helpen je graag
© 1996-2020, Amazon.com, Inc. en dochterondernemingen