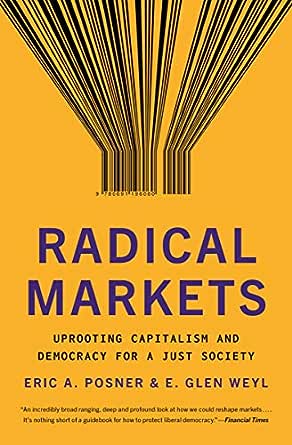 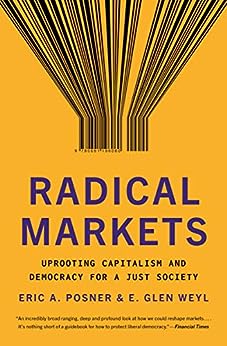 Many blame today's economic inequality, stagnation, and political instability on the free market. The solution is to rein in the market, right? Radical Markets turns this thinking on its head. With a new foreword by Ethereum creator Vitalik Buterin and virtual reality pioneer Jaron Lanier as well as a new afterword by Eric Posner and Glen Weyl, this provocative book reveals bold new ways to organize markets for the good of everyone. It shows how the emancipatory force of genuinely open, free, and competitive markets can reawaken the dormant nineteenth-century spirit of liberal reform and lead to greater equality, prosperity, and cooperation.

Only by radically expanding the scope of markets can we reduce inequality, restore robust economic growth, and resolve political conflicts. But to do that, we must replace our most sacred institutions with truly free and open competition—Radical Markets shows how.

Daniel T. Roberts
5,0 van 5 sterren Little matters like new ideas: "Radical Markets" is chock full of them.
12 mei 2018 - Gepubliceerd op Amazon.com
Geverifieerde aankoop
From its Table of Contents, “Radical Markets” might seem to be a meandering hodgepodge of thought experiments. Each chapter elaborates on specific and unexpected areas where “radical markets” might be introduced in their current absence, but the interrelation of these case studies and policy proposals can appear tenuous. Book projects in the social sciences are typically deep elaborations on a tight substantive areas. However, the contrasting breadth of “Radical Markets” isn’t an overreach beyond appropriate area-expertise. Rather, each topic and chapter maps to ongoing published papers and academic projects, reflecting the span of the authors’ recent research careers.

Modern economics increasingly occupies itself with tight empirical identification and meticulous mathematical models. Meanwhile, Posner and Weyl audaciously use “Radical Markets” to expound on topics like the inherent justifiability of private property or equal-vote democracy. The key to understanding this approach — and the authors’ research agendas generally — lies in the book’s introduction and conclusion. There, Posner and Weyl harken back to a cast of figures that they dub the “Philosophical Radicals”, including post-enlightenment Political Economists like Adam Smith, David Ricardo, John Stuart Mill, and Henry George, as well as more controversial thinkers like Karl Marx (*collective gasp*) and Ludwig von Mises (*aghast gasp*). In orthodox economics, these figures are treated like Pre-Newtonian physicists or medieval scholastics. In heterodox circles, they serve as rallying points for hopelessly opposed camps of partisans. Posner and Weyl instead evoke these thinkers for their common commitment to questioning the inefficient public institutions of their day, no matter how entrenched and inevitable they may have seemed. Even though the modern liberal democratic order is a product of these thinkers’ astounding success, the authors suggest that our present day calls for its own cadre of questioning “Radical Philosophers” with unexpected disruptive ideas.

Among those the authors dub the “technocratic middle”, this exercise might seem unnecessary. Modern “neoliberal” types seem to take Fukuyama’s “end of history” seriously in its broad strokes. When I glossed the premise of “Radical Markets” to one such friend (pursuing an economics PhD), he suggested that we’re in an era of diminishing marginal returns for new ideas — better to carefully tinker and keep the machine of modernity humming along. Posner and Weyl destabilize this intellectual complacency in “Radical Markets”. First, they use their introduction to synthesize a wealth of contemporary research suggesting that the liberal order is threatened by rising inequality, stagnation, polarization, nativism, and coercive market power. In the “meat” of the work that follows, the authors convincingly argue that institutions we take for granted are both hopelessly inefficient/inequitable and theoretically substitutable. The authors argue that these alternative — including continuous auctions for property and an alternative voting scheme based on the Vickrey-Clarke-Groves mechanism — could both help address present social ills and build towards a brighter future that’s inconceivable in the same way today’s world would have seemed far-fetched in the 18th century.

“Radical Markets” doesn’t provide a flawless utopian vision for tomorrow’s brave new world. The authors openly demur on the merit of their proposals, suggesting a gradual and iterative path for implementation to help forestall the disasters that occur when humans act unexpectedly in new institutional settings. This seems advisable. The concerns of critics on both ethical and practical grounds are worth listening to. Care should be taken in pursuing alternatives to systems that presently provide a basic bulwark against inefficiency or violations of human rights. Posner and Weyl, however, are right to point out the status quo is already a moral disaster on many dimensions, inattentive as it is to unjustly appropriated wealth, violations of meaningful minority rights, and abhorrent intra- and international income inequality. The authors are shouting from their platform that the Emperor has no clothes, and suggesting he put on a coat. Critics may argue vehemently for pants instead, but have basically ceded to the authors’ premise that present public institutions are unjustifiable and ought to be uprooted for a more just society.

I’ve been exposed to most of the ideas covered in “Radical Markets” ahead of time through lectures, working papers, op-eds, and casual conversations. My first reaction is usually dismissive, given how decently capitalism and democracy seem to be doing in their broad strokes. In the months and years that followed these encounters, Posner and Weyl’s ideas have come to roost and relentlessly gnaw at this initial skepticism, especially when I’m forced to reckon with the many failings of the present liberal order. I’d encourage other doubtful readers to let the ideas presented here stew in a similar fashion before jumping to conclusions. The parallel to Socrates introduced earlier fits in the following sense: some of Posner and Weyl’s proposals may smack of dystopia in the same way his ideal “Republic” does, and perhaps justifiably so in cases. However, taking the time to engage seriously with the authors’ ideas can leave anyone feeling a little bit like Socrates’ unfortunate interlocutors, and they will be made better thinkers for it. In a world where little matters like ideas do, “Radical Markets” provides the most articulate and accessible package of the authors’ radical ideas to date. Therefore, I enthusiastically recommend picking up a copy, and hope you find the journey as thought-provoking as I have.

Mark I. Jamison
2,0 van 5 sterren Life is not a market
10 juli 2018 - Gepubliceerd op Amazon.com
Geverifieerde aankoop
I did read it and found it unrealistic, naive, and impractical. There are several normative assumptions underlying many of the assertions and premises behind each proposal that are simply hand waved as being accurate or true when, in fact, they are highly debatable. For example, in the chapter on COST the authors continually refer to "most productive use" but their determination is quite obviously a narrow economic one that treats people as mere economic actors.
It's worth reading if for no other reason than to see how to ostensibly very smart people can be so out of touch with basic human qualities.
As an antidote I would recommend some of Michael Sandel's work on the problems of treating everything as a market. Or perhaps Kant and understanding the categorical imperative.
Meer lezen
27 mensen vonden dit nuttig
Vertaal recensie in het Nederlands

shopper478327
5,0 van 5 sterren I highly recommend all economists and anyone interested in finding economic solutions ...
26 april 2018 - Gepubliceerd op Amazon.com
Geverifieerde aankoop
This is one of the most thought provoking economics book I have read in the past several years. The authors offer some truly radical solutions to several major problems plaguing our current society. Although I personally do not think that most of their solutions are practical, this book made me think out of the box and outside the normal paradigm and I came away with several new thoughts and ideas that I am looking forward to explore more in the future.

I highly recommend all economists and anyone interested in finding economic solutions to read this book. Although the writing is clear and concise, I must warn you though that this is not an easy bed time or vacation read since every chapter makes you think a lot and you might spend several hours dwelling on the solutions made in the book.
Meer lezen
24 mensen vonden dit nuttig
Vertaal recensie in het Nederlands

Brian LaRocca
4,0 van 5 sterren Rethinking the Economic Order
4 juni 2018 - Gepubliceerd op Amazon.com
Geverifieerde aankoop
If you like economic policy, this is a fun read that challenges a lot of your preconceptions. The authors prescribe 5 big ideas for transforming the economy: 1) Property taxes set by owners with the option of others to buy your assets at your assessed value 2) The ability to weight or buy votes in a democracy 3) Immigrant sponsorship 4) Diversifying the owners of stocks 5) Consumer data ownership.

While the likelihood of any of these ever happening is small, it is wondrous to think of the possibilities. Just imagine detaching peoples' sense of ownership to their land, ending distorting income and sales taxes and encouraging the efficient use of all land? Pretty impressive. Their updating of Henry George's views are much appreciated. I also love the immigration sponsorship idea. This would allow those most vulnerable to immigration to gain profoundly by having more of it. Too often its only the elites who benefit while native, low-skilled laborers face higher competition and stagnant pay. This would redress this disparity.

The rest is a mixed bag. I think I like their ideas for democracy but the process for "Quadratic Voting" sounded confusing and it was tough to follow the finer details. The recent concern of index investing being a quasi-communist pursuit missed the point that increased intra-industry ownership concentration must face off against inter-industry ownership (Vangaurd also owns stakes in suppliers and clients of customers they own and therefore want high competition). The book also did little to persuade me that data usage by FANG needs a) be more regulated b) should pay customers who already have a huge benefit of enjoying platforms for free. The platform itself creates the content and I am glad I can keep in touch with a lot of different people without doing anything.
Meer lezen
12 mensen vonden dit nuttig
Vertaal recensie in het Nederlands
Ga naar Amazon.com om alle 40 recensies te bekijken 3,9 van 5 sterren
Terug naar boven
Over ons
Verkoop bij ons
We helpen je graag
© 1996-2020, Amazon.com, Inc. en dochterondernemingen