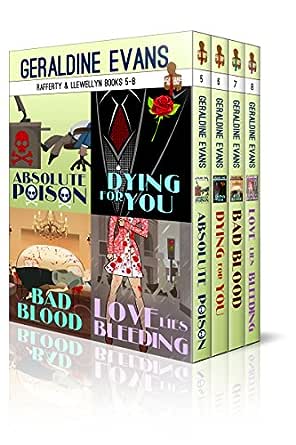 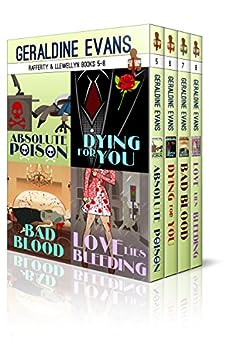 *
For Readers who like Detective Series with a bit of humor.

Superstitious British Detective Joseph Rafferty is having a bad week -- not an unusual occurrence -- and he can’t help feeling trouble comes in threes.

Rafferty’s premonition turns out to be accurate when a company manager is found dead at his desk. The tyrannical Barstaple had known full well that he was hated by most of the office. But did he really deserve to be poisoned? And so horribly.
*
DYING FOR YOU #6

’Wit, charm, good writing, great characters, red herrings and a superb plot are just part of the reason this book is so good.’

Detective Inspector Joe Rafferty manages to become chief suspect in his own double murder investigation. And all he’d been doing was looking for love…
*
With his fortieth birthday on the horizon, he decides it's time to take the initiative. So he signs up with the Made in Heaven dating agency, persuading his more up-market cousin to let him borrow his identity for reasons of discretion. It's just unfortunate that the first two women with whom he strikes up a rapport should wind up murdered and with himself – or rather his alter ego – in the frame for the crimes.
*
Put in charge of the double murder investigation, Rafferty is forced to keep a low profile, soothe his cousin's fury at wearing the murderer's badge of shame, and at the same time find the girls' real killer.
*
BAD BLOOD #7

A robbery gone wrong, Detective Joe Rafferty thinks, when murder victim, wealthy widow Clara Mortimer was found battered to death in her home. Then Rafferty learned she wasn’t a widow at all – and her estranged husband was living in the same block under a false name.
*
Their investigation brings Rafferty and Llewellyn face to face with just how down and dirty families can be...and not just the families of murder victims.
*
LOVE LIES BLEEDING #8

ʻTotally had me guessing.’

When Felicity Raine stumbles into the police station and confesses to murdering her husband, DI Joe Rafferty has his doubts.
*
Investigating, Rafferty's doubts increase when he meets her in-laws, and catches them out in several deceits. His copper's nose senses there is something peculiar going on. And when he discovers who is down to inherit, his suspicions are roused even further. Is Felicity being framed? And will he get to the truth before she faces imprisonment?

THE RAFFERTY & LLEWELLYN SERIES
Dead Before Morning #1
Down Among the Dead Men #2
Death Line #3
The Hanging Tree #4
Absolute Poison #5
Dying For You #6
Bad Blood #7
Love Lies Bleeding #8
Blood on the Bones #9
A Thrust to the Vitals #10
Death Dues #11
All the Lonely People #12
Death Dance #13
Deadly Reunion #14
Kith and Kill #15
Asking For It #16
The Spanish Connection #17
Game of Bones #18
*
WEBSITE/BLOG: https://geraldineevansbooks.com

loveday54
5,0 van 5 sterren Rafferty's troubles
3 november 2016 - Gepubliceerd op Amazon.com
Geverifieerde aankoop
I love this series and watching the partnership grow as it grows, the more Rafferty tries to keep Llewellyn from finding out when he gets himself in a fix.

With Llewellyn now family, you would think it would help, but he is also very straight laced and and sees everyone in black and white.

Thankfully, Llewellyn is quick to watch out for him when he knows something is up.

IreneS
4,0 van 5 sterren Well thought out mystery plots
8 augustus 2016 - Gepubliceerd op Amazon.com
Geverifieerde aankoop
These books are a fair example of British police procedural cozy mysteries. Rafferty is police inspector whose private life is full of mistakes. If it is possible to make a poorly thought out decision he will make it, leading to sometimes humourous issues. Llewellyn is his serious, educated sergeant who also becomes his cousin by marriage. They remind me very much of the TV show Lewis. They are an enjoyable read and the plots are well thought out and cleverly written.
Meer lezen
Een iemand vond dit nuttig
Vertaal recensie in het Nederlands

Virginia
4,0 van 5 sterren A good mix of personalities
26 oktober 2016 - Gepubliceerd op Amazon.com
Geverifieerde aankoop
A very enjoyable read, well-developed characters with believable human traits that add to the story. A good mix of personalities, meeting the mysteries encountered through their particular habits of personality, while also blending in their life and efforts for balance. Highly recommended for a good read in a series that the author must be justly proud of.
Meer lezen
2 mensen vonden dit nuttig
Vertaal recensie in het Nederlands

Kenneth R. Crouch
4,0 van 5 sterren Good well written stories!
17 mei 2016 - Gepubliceerd op Amazon.com
Geverifieerde aankoop
I've obviously read quite a few of this series since this review is for books 5 to 8! Writer has a nice, comfortable style and presents well-developed characters and interesting storylines. The series presents a look into life in a part of Britain that I find intriguing. I'll continue to read through this series - and that's the best praise I can give.
Meer lezen
Een iemand vond dit nuttig
Vertaal recensie in het Nederlands

Hanna
5,0 van 5 sterren British Detectives are always more fun
10 februari 2017 - Gepubliceerd op Amazon.com
Geverifieerde aankoop
I've been reading the entire set from Book 1 on. I just love these characters.. both Rafferty and Llewellyn!
They're always up to something interesting and they are so different from each other yet they gell. I'll keep picking
up more series as they get written. Don't want to lose my buddies :)