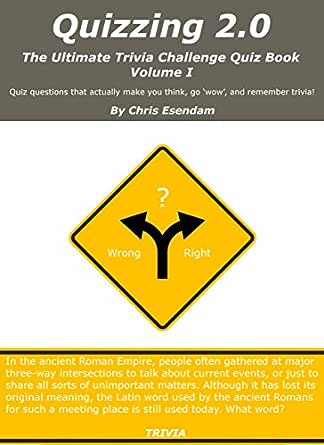 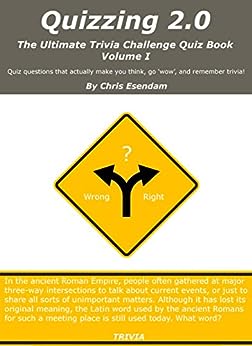 What makes this book worth reading?

Instead of bothering you with long and tiresome stories about me, my quizzing background, and why I think you should read this book, I’d rather get straight to the point and let you decide whether you think this book is worth reading or not. It will only take 6 answers…

1b.In the ancient Roman Empire, people often gathered at major three-way intersections to talk about current events, or just to share all sorts of unimportant matters. Although it has lost its original meaning, the Latin word used by the ancient Romans for such a meeting place is still used today. What word?
Aha! That’s good TRIVIA, thank you!
***
2a. How is the Riley-Bolten House, a historic home located at North Bethesda, Maryland, popularly known?

2b. The Riley-Bolten House is a historic home located at North Bethesda, Maryland. An early owner of the home was Isaac Riley, who acquired the Afro-American Josiah Henson while he lived there. This Josiah Henson was a source of inspiration for the best-known work of a 19th century American female author and abolitionist. In 2011 the Riley-Bolten house was listed on the National Register of Historic Places. By what name is this house locally known?
***
3a.What term is given to a person who looks down on people of lower social class?

Uhm… which of a million possibilities!?

3b. In the early 19th century, many Oxford and Cambridge colleges distinguished ordinary students from their aristocratic schoolmates by writing ‘sine nobilitate’ (Latin for ‘without nobility’) next to the names of ordinary students. It is often claimed that this habit gave rise to a term associated with intellect, wealth and power. Which term?
***
4a. What two-word French term is given to the cyclist occupying last place in the Tour de France?

I know this one! ‘Kinda boring though’.

4b. In earlier times, a certain object was hung on the last carriage of passenger trains. Conductors (or ‘guards’ in Commonwealth English) would look for this object to make sure none of the train’s carriages had become disconnected. Nowadays, the object is repeatedly referred to in a famous sporting event. What object?
***
5a. What is the name of the best-known character of English children’s author Martin Handford?

What!? Any extra clues?

5b.In 1986, Martin Handford was asked by his art director to draw a character with peculiar features. After much thinking, he came up with a nerdy looking world traveler, always in search of his next adventure. Sometimes it would take Handford up to eight weeks to draw one of his sketches. His sketches became very popular and have entertained people ever since. What is the name of Handford’s best-known character?
***

6a.What Chinese terms are given to the two complementary forces that make up all aspects and phenomena of life?

6b.In the Chinese myth of Pangu the universe began as an egg. Pangu, born inside the egg, broke it into two halves: a clear upper half and a murky lower half. How are these halves philosophically known?
***

Well, I think you see where I’m going here. If you prefer the ‘a’-questions I’ll just be honest and advice you not to read any further. However, if you prefer the ‘b’-questions, like I do, it’s likely you share my opinion that writing a good quiz book isn’t just about gathering a bunch of one line questions, but rather about making the questions narrative, entertaining and memorable.
Are you that ‘b’-questions kind of person and up for a little quiz challenge? Be sure to continue reading! Happy Quizzing!

Bob Jensen
5,0 van 5 sterren Must read quiz book!
18 januari 2017
Geverifieerde aankoop
Great read! Finally another quiz book with narrative and fun questions! Not just one of those standard quiz books with one-line questions you either know or absolutely do not know. With this type of questions there's actually an in-between. Several times I actually figured out the answer by re-reading the question and picking up the hints! On the other hand, there were some 'Ah, really? I could have known that!' moments as well. Another big plus: many of the answers are supplied with interesting additional info as well. All in all: well written and very entertaining!
Meer lezen
Een iemand vond dit nuttig
Nuttig
Commentaar geven Misbruik melden
Vertaal recensie in het Nederlands
Alle 1 klantenrecensies bekijken
Klantenrecensie schrijven
Terug naar boven
Over ons
Verkoop bij ons
We helpen je graag
© 1996-2020, Amazon.com, Inc. en dochterondernemingen