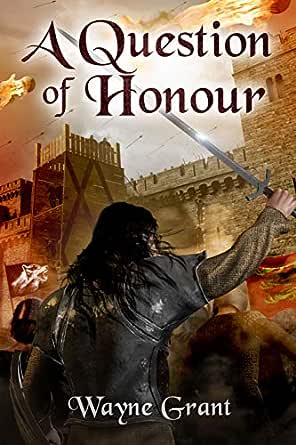 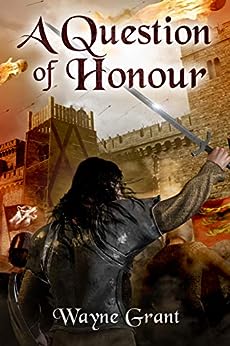 In this rousing conclusion to The Saga of Roland Inness, King Richard has called up Roland and the legendary Invalid Company to serve in his grinding war against King Philip of France. It's a conflict where brutal mercenaries ravage the land and take no prisoners and where a king's favour is for sale. As Roland leads the Invalid Company into harm's way, his old enemy buys his way out of exile and threatens all that Roland holds dear back in England. Can Roland and the Invalids survive the war in France with their reputations intact? It's A Question of Honour!

Stacey Gidman
4,0 van 5 sterren Pay Attention to the Title
1 november 2019 - Gepubliceerd op Amazon.com
Geverifieerde aankoop
This is not my favorite book of the series at all, but it is still important.

When I first began, I felt frustrated - I can’t stand Richard the Lion-sized Ego-hearted. He may have been a great warrior, but he was a rotten king unworthy of leading anyone. The same goes for Phillip.

France and England both needed a good spanking and to learn the meaning of “mind your own business”. I spent hours of my childhood knee deep in history books recounting their various wars and I am unimpressed.

It makes me sick in my soul to think about the millions upon millions of precious lives lost at the expense of someone else’s carnality. Some wars are absolutely necessary to protect freedom and family (like WWII), others are a gut wrenching waste of the most precious gift - life.

Mr. Grant has through the character of Roland given us a heartbreaking view into the lives of those who lived in this dark time when the strong preyed upon the weak and took whatever they wanted, not caring about the cost.

Why send Roland to France? This is the LAST book in the series, isn’t this a bit of a distraction? At first I was very focused on the setting (a setting that already angers me), but Grant has earned my trust, so I continued. And then I began to understand - the answer is in the title.

Throughout all of the moments horrific chaos Roland is thrust into against his choice, he often comes back to One Event that set things in motion to lead him down the path of a warrior.

A noble hearted boy made a choice to hunt an illegal deer in order to feed the family that he loves. He chose to do the right thing in the face of horrible circumstances - famine - and in the face of potential consequences.

He lost his father, but he never lost himself.

I can’t imagine living in Roland’s world, he rarely gets a chance to choose his circumstances. He goes through hell multiple times. He loses people he loves. He faces cold, heat, injury, exhaustion, fear, hunger, and being away from his loved ones over and over again.

And over and over again, despite his rotten circumstances, Roland stays honorable. He understands honor in a time when men boasted about it and then trampled it under their warhorses. He protects the weak, encourages the broken, maintains fair justice, uses self control, and does not make decisions out of pride or ego. He is the embodiment of a good leader, humble and intent upon helping those who follow him to rise ever higher. When someone is in need he is there.

This marks Roland’s entire journey, this marks him as a man. A series of moment by moment decisions to do the right thing when it would be so easy not to. To remain humble and teachable. To give second chances. To keep going when others would want to quit. To embrace and celebrate a good moment instead of letting fear and anger steal it from him.

His honor does not leave him in the dust, it makes room for him. He stands before kings and mighty rulers. He makes friends where others would make enemies. He restores instead of breaking.

And it all comes back around full circle to him in this book. In his times of need, Roland’s choice to do the right thing always paves the way for help to come, for a door to open.

Roland stands apart as someone who can be counted upon, and the investment he has sown into others he reaps in full in this book.

Even his final decision to kill De Ferrars (Yeah, spoiler alert but it’s not like we didn’t all know that was gonna happen) comes from a desire to love and protect.

Roland had chosen for the sake of his family to release his desire for revenge - again, honorable - but his enemy makes it apparent that Roland has no choice but end him permanently for the SAKE of the Inness family. He ends De Ferrars for that reason.

Many characters get termed “heroes” who are not worthy of that title. God’s grace can save anyone, but good night! No one should be looking to these types of people/characters as role models.

Roland is truly a character worthy of being a role model. He is honorable, he is kind, he is just. And I am going to miss him.

Kindle Customer
5,0 van 5 sterren End of a satisfying saga
3 november 2019 - Gepubliceerd op Amazon.com
Geverifieerde aankoop
I have enjoyed this series of books. Roland Innes and his companions will live on in my memory until Mr Grant write another installment. His characters are believable and !likeable and the villain s are despicable. The time period is an exciting one.If you want your teenagers to find an exciting series to get lost in, I recommend this one.
Meer lezen
Een iemand vond dit nuttig
Vertaal recensie in het Nederlands

Ken Grant
5,0 van 5 sterren Sorry to See this Series Ending, but Looking Forward to a New Series
10 december 2019 - Gepubliceerd op Amazon.com
Geverifieerde aankoop
I've now read all of Wayne Grant's Longbow series. I've loved it from the beginning and each book seems to pull more emotions from me. As a retired Army officer I felt that "A Question of Honour" covered everything I learned about leadership while commanding platoons and batteries in the Army. I found myself in tears as the Invalids made valiant stands by rallying to their leaders. Wayne Grant can write a battle scene better than any I've ever read and I've read a few.
Meer lezen
Vertaal recensie in het Nederlands

Rick the Sailor
5,0 van 5 sterren A fitting end
21 oktober 2019 - Gepubliceerd op Amazon.com
Geverifieerde aankoop
While it took 6 1/2 books for Roland to gain justice for his father the conclusion was worth waiting for. I thoroughly enjoyed the saga of Roland Innes and his warband, "the invalide company".
Meer lezen
Een iemand vond dit nuttig
Vertaal recensie in het Nederlands

Veljko
5,0 van 5 sterren Great ending
23 oktober 2019 - Gepubliceerd op Amazon.com
Geverifieerde aankoop
Amazing series, I hope it will continue in the future. Characters are very young, and there is a lot to write about. What I especially love about this
series is that it shows all brutality of this age without too much gore, rapes and similar stuff. Definitely read this series.
Meer lezen
Een iemand vond dit nuttig
Vertaal recensie in het Nederlands
Ga naar Amazon.com om alle 30 recensies te bekijken 4,7 van 5 sterren
Terug naar boven
Over ons
Verkoop bij ons
We helpen je graag
© 1996-2020, Amazon.com, Inc. en dochterondernemingen