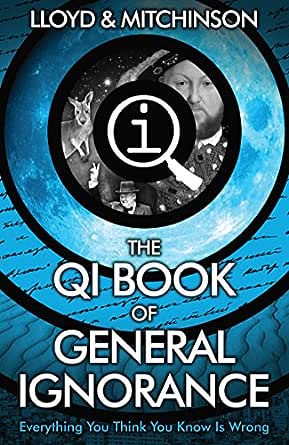 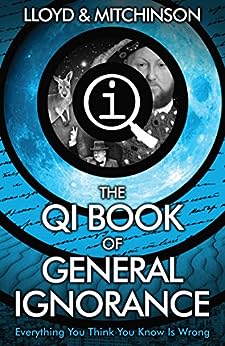 From the bestselling authors of The Book of General Ignorance comes a noticeably stouter edition, with 26% extra facts and figures perfect for trivia, pub quiz and general knowledge enthusiasts. The QI team sets out again to show you that a lot of what you think you know is wrong.

If, like Alan Davies, you still think the Henry VIII had six wives, the earth has only one moon, that George Washington was the first president of the USA, that Bangkok is the capital of Thailand, that the largest living thing is a blue whale, that Alexander Graham Bell invented the telephone, that whisky and bagpipes come from Scotland or that Mount Everest is the world's tallest mountain, then there are at least 200 reasons why this is the book for you.

The researchers at QI have written many bestselling books including such titles as The QI Book of General Ignorance and 1,277 Facts To Blow Your Socks Off. They now present a noticeably stouter edition, an indispensable handbook for trivia lovers, pub quiz enthusiasts and general knowledge experts alike.

And remember - everything you think you know is still wrong.

The international bestseller, this comprehensive catalogue of all the misconceptions, mistakes and misunderstandings in 'common knowledge' will make you wonder why anyone bothers going to school. Carry it everywhere to impress your friends, frustrate your enemies and win every argument. You have no muscles in your fingers. Coffee isn't made from beans. No one has ever slid down a bannister. There are 613 commandments in the Bible. Vipers, cobras and rattlesnakes are not poisonous. Newborn babies are indifferent to their mothers. The Swiss Family weren't called Robinson. The unluckiest date is Monday the 27th.
Alle bekijken
click to open popover

Steve Ivanovics
4,0 van 5 sterren For those who loved QI, the funny, nerdy, and witty show hosted by Stephen Fry.
1 juli 2019 - Gepubliceerd op Amazon.com
Geverifieerde aankoop
I fell for the show since the first time I saw it. What's better than funny and smart people having fun while expressing awe at the .... everything. This book packages that into its pages for private enjoyment.
Meer lezen
Vertaal recensie in het Nederlands

Amazon Customer
5,0 van 5 sterren Good fun, in a "What the...?" kind of way.
2 december 2013 - Gepubliceerd op Amazon.com
Geverifieerde aankoop
I love the TV series, and I love the book. For fans of the series, many of the examples in the book will be familiar to you, but it's effectively a collection of facts written in an amusing and illuminating way. It manages to be a fun read, rather than a list of 'things', however - something which several similar publications could learn by.

You're not going to win any general knowledge awards by memorising this book - but the occasional gem might stick - and being able to trot it out in a social setting will make people wonder just what the heck you've been doing with your time.

Gayle Bach-Watson
5,0 van 5 sterren Wonderful Book!!
1 november 2018 - Gepubliceerd op Amazon.com
Geverifieerde aankoop
I love Qi! It got me through two rounds of chemotherapy. Now I use these books to include interesting trivia in our church newsletter. Thank you!
Meer lezen
Vertaal recensie in het Nederlands

David Brown
5,0 van 5 sterren A lot of fun
9 februari 2013 - Gepubliceerd op Amazon.com
Geverifieerde aankoop
I am a big fan of the TV show QI so when I saw this book I had to have it. I was not disappointed. The book is a series of little stories based on interresting questions. I think they have all been on TV and I recongnised many of them. Nonetheless I found the book compelling and overall my level of general ignorance has reduced. Many of the facts were quirky but believeable. I found the book a very handy second read. As the chapters are short it is ideal for those times when you only need to fill a minute or two; standing in a queue, waiting for a meeting etc.
Meer lezen
2 mensen vonden dit nuttig
Vertaal recensie in het Nederlands

Kindle Customeraaaa
4,0 van 5 sterren informative
7 april 2014 - Gepubliceerd op Amazon.com
Geverifieerde aankoop
some interesting facts here, especially ones debunking long aquired beliefs, maybe more information than you want on some facts and not enough on others. will lead to you doing more research yourself. worth buying for the information it does give you and for leading you to more research but much better as a book than as kindle material, have book of general ignorance 2 on paper and it is much easier to find anything there.
Meer lezen
2 mensen vonden dit nuttig
Vertaal recensie in het Nederlands
Ga naar Amazon.com om alle 35 recensies te bekijken 4,3 van 5 sterren
Terug naar boven
Over ons
Verkoop bij ons
We helpen je graag
© 1996-2020, Amazon.com, Inc. en dochterondernemingen