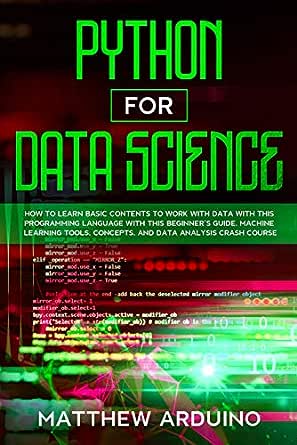 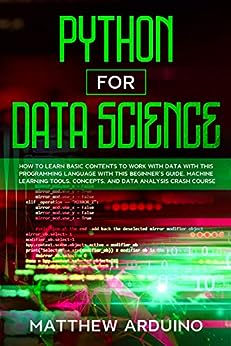 Python for Data Science: how to learn basic contents to work with data with this programming language with this beginner’s guide. Machine learning tools, ... analysis crash course. (English Edition) Kindle-editie

The truth is: Python is one of the best languages, suited for programming, especially when it comes to a data scientist.

Python is a very flexible language, besides being powerful and free. It is also an open-source language, besides being simple and coming with easy to read syntaxes. With the help of python, data manipulation, data visualization, as well as, data analysis becomes very simple. Python also has all the libraries, that are vital for every application of machine learning and scientific processing of data. Though Python is a high-level language, it is also quite easy to learn and is procedure-oriented besides being object-oriented.

With data science gaining more popularity, the programmers need to have deep knowledge in Python, one of the languages required in data science. Python is widely used by data scientists because of the presence of a large number of libraries. It can help in performing multiple tasks like web development, database, data mining, image processing, graphical user interface and a lot more. As Python can combine improvement, along with the ability to interface with algorithms of high performance, it is a very popular language among the data scientists.

DOWNLOAD: Python for Data Science: how to learn basic contents to work with data with this programming language with this beginner’s guide. Machine learning tools, concepts, and data analysis crash course.

Data Science is all about ETL or extraction-transformation-loading process, which makes Python, very much suited for the purpose. Python has shown a sharp rise, as high as 51%, in its popularity, as a top data science tool. This is because Python can integrate very well with most cloud and platform-as-a-service providers. It also supports multiprocessing, which is helpful for parallel computing. The language ensures large-scale performance in both machine learning and data science. Most importantly, it can be extended with the modules written in other languages like C and C++.

The goal of the eBook is simple: The eBook is a comprehensive resource to help us understand the importance of Python for data science.

You will also learn:

Download the eBook, Python for Data Science to know more about their relationship.

Scroll to the top of the page and select the buy now button.

Alex
5,0 van 5 sterren Great
17 februari 2020 - Gepubliceerd op Amazon.com
It gave me what I wanted and I will build on the information using what I already know. The author is an engineer and being of a methodical/mechanical mindset myself, I was happy with the way he laid it all out. There is also good information on other topics for real beginners such as the importance of payton control which are important
Meer lezen
Vertaal recensie in het Nederlands

jacob
5,0 van 5 sterren Good
16 februari 2020 - Gepubliceerd op Amazon.com
I am using advanced analytics for work, and want to horn my machine learning skills in python. Have been shopping on Coursera and Udemy for courses but there isn’t one designed for my background. This book is a MUST Have for a experienced sql analyst who want to learn a new language.
Meer lezen
Vertaal recensie in het Nederlands

👩‍Rosemarry👩‍
5,0 van 5 sterren Great
18 februari 2020 - Gepubliceerd op Amazon.com
Enjoyed this book! Very useful information. It was a very easy read and provided very detailed information, pros and cons of each option and helpful resources. I also love the tone of this book and the personable manner it was written. Would definitely recommend!!
Meer lezen
Vertaal recensie in het Nederlands