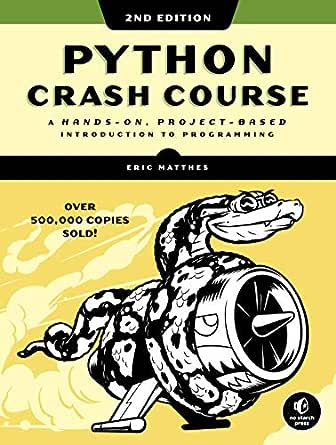 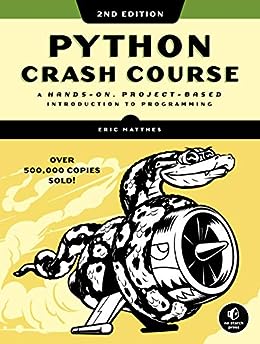 Recommended reading for a "shining tech career" by Techradar India Python Crash Course was selected as one of the best books for learning Python by Real Python
"It has been interesting to see, over the last few years, No Starch Press, which produces this book, growing and producing future classics that should be alongside the more traditional O'Reilly Press programming books. Python Crash Course is one of those books."
--Greg Laden, ScienceBlogs "All of these projects are well thought out and presented in such a way that learning the subject matter and implementing it is much more an enjoyable pastime rather than an onerous task that must be completed. Eric took the time to deal with some rather complex projects and lay them out in a consistent, logical and pleasant manner that draws the reader into the subject willingly, which unfortunately, many authors fail to do."
--Full Circle Magazine "The book is well presented with good explanations of the code snippets. It works with you, one small step at a time, building more complex code, explaining what's going on all the way."
--FlickThrough Reviews "Learning Python with Python Crash Course was an extremely positive experience! A great choice if you're new to Python."
--Mikke Goes Coding

This is the second edition of the best selling Python book in the world. Python Crash Course, 2nd Edition is a straightforward introduction to the core of Python programming. Author Eric Matthes dispenses with the sort of tedious, unnecessary information that can get in the way of learning how to program, choosing instead to provide a foundation in general programming concepts, Python fundamentals, and problem solving. Three real world projects in the second part of the book allow readers to apply their knowledge in useful ways.

Readers will learn how to create a simple video game, use data visualization techniques to make graphs and charts, and build and deploy an interactive web application. Python Crash Course, 2nd Edition teaches beginners the essentials of Python quickly so that they can build practical programs and develop powerful programming techniques.

Dan
4,0 van 5 sterren Great inner content! Not that great outer quality. Still worth it!
5 juli 2019 - Gepubliceerd op Amazon.com
Geverifieerde aankoop
Have had this for one day and the cover is already coming off. Nothing a little glue won’t fix, and that’s the downside of paperbacks that you have to put weight on to keep closed, in my opinion.

BUT the inner content is well worth it. I’ve been wanting to learn programming for years but have often gone away discouraged because the tutorials and teachers randomly start throwing complicated problems at you out of nowhere.

Not so with this book. It eases you into each topic, breaks it down very clearly, and has exercises throughout that you can follow along with. Make sure you follow along! There are specific exercises throughout, but I highly recommend typing out the example code and playing around with it/experimenting on your own as well. Then by the time you get to the exercises you’ll have a good idea about how to approach it.

STICK WITH IT! I decided I wanted to learn to program 10 years ago! I would start for a week and then quit when it got too complicated and felt overwhelming. Then I’d come back to it a few years later, and same thing. Then it hit me one day, “If I had pushed through the first time and been patient, I’d have 10 years of experience as a programmer right now. Do I want to look back in another 10 years and feel that way again? Or do I want to push through this time so in 10 years I’ll actually have the experience under my belt!?”

Stick with it. Be patient with yourself if things get too complicated or you “feel too dumb” to get it. If you hit a block, go back a few pages and go through it again. Everyone is selling “learn ____ quick!” books these days. It’s a good way to get random chunks of knowledge but a terrible way to master it. So be patient!

And get this book. :). It makes things very simple to understand and really holds your hand through everything.

Marcel Dupasquier
5,0 van 5 sterren The updated preface
24 mei 2019 - Gepubliceerd op Amazon.com
For all who want to compare the 1st to the 2nd edition, here the Preface to the Second Edition.
Meer lezen

Mr.Johnny101
4,0 van 5 sterren Good for beginner but does not go too far or deep
29 juni 2019 - Gepubliceerd op Amazon.com
Geverifieerde aankoop
What is good about it? It teaches you the basics of Python But it does not have any advanced materials inside. Evey little example is well explained. It has a lot of examples are presented. It also asked readers to do exercises after concept.
However, I wish it comes with an answer for those after chapter exercises. Otherwise, it becomes meaningless because you won't know if you got it or not. Overall, well explained but somewhat too much explanation. Thus, this might be good for people who do not have any programming skill. Also, words are simple and straightforward.

Update: Thanks to the author reply, there are solutions online. But I still think it explained things too much. Thus, costed too much reading for a simple concept.
Meer lezen
32 mensen vonden dit nuttig
Vertaal recensie in het Nederlands

Jose Casillas
5,0 van 5 sterren Great book for python.
13 mei 2019 - Gepubliceerd op Amazon.com
Geverifieerde aankoop
I was recommended this book by my computer science professor for a C++ class. I wanted to learn python on my own and I can say, it's a very easy book to follow, especially compared to C++. I highly recommend it to anyone wanting to learn python l.
Meer lezen
21 mensen vonden dit nuttig
Vertaal recensie in het Nederlands

kdfuser
5,0 van 5 sterren Very enjoyable read
16 augustus 2019 - Gepubliceerd op Amazon.com
Geverifieerde aankoop
Just finished the book and followed the code all way, even did some of the "Try this yourself" exercises. Very well organized. 6 stars on that. Code in the book was accurate and worked as expected. I didn't just try the code from the resource web site. I actually typed in every line from the book and made it all the way to deployment. (Quite an accomplishment, I say. :-)).

Only one gripe - see pictures attached. After 3 weeks of ownership, the book lost its clothing. :-(

I wonder if Mr Matthes will send me an autographed copy to replace my sad, broken, copy? :-)
Meer lezen