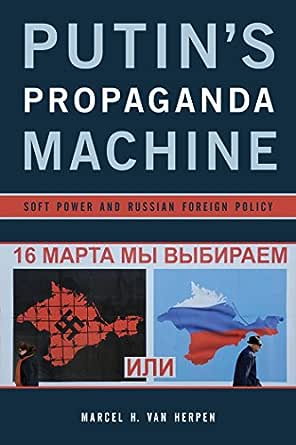 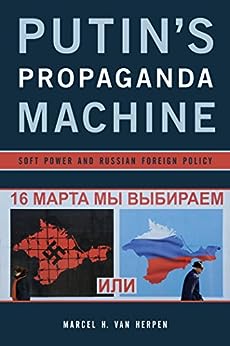 Russia's soft power successes have been noticed by the American and European policy communities, but scholarly production has been tardy with an analysis of the phenomenon that changed our perception of Russia. Van Herpen's timely book provides a compelling analysis of the Russian strategy of branding itself abroad and its ability to generate support and bedfellows. A must-read book for those following Russian affairs.--Marlene Laruelle, George Washington University

A good book for understanding how Russian propaganda works and what instruments the Kremlin uses.... A valuable resource.--Parlamentni Listy

A valuable resource when trying to understand the geopolitical developments between Russia and the West. . . .Van Herpen's research puts together a convincing picture to help the reader understand the lengths to which Russia is willing to go with its propaganda abroad. Some of the cases presented in the book read like investigative reports, chillingly putting the pieces together to show how tangled some parts of the West are becoming with Kremlin interests.--New Eastern Europe

As Marcel H. Van Herpen details in his magnificent book, Russia has spent the last 20 years building up its media presence in countries such as France and Germany. The Russian media presence has been linked to other pernicious Russian endeavors, such as buying influence in major political parties (of both the Left and Right). . . . Vladimir Putin is intent on replicating this strategy in the United States.--The Weichert Report

Marcel van Herpen reminds us that Russia's propaganda machine is working actively and intensively. In addition to military interventions, Russia effectively employs its 'soft power.' Written in a lucid and comprehensive style, this book clearly represents the strong and weak aspects of Russian propaganda. This knowledge becomes the starting point for resisting the operation of the propaganda machine and reducing its influence.--Institute of Philosophy and Social Sciences

Marcel H. Van Herpen provides a comprehensive outline of current Russian efforts that are more elaborate and effective than any of Moscow's Cold War-era campaigns. . . . [He] provides details about Russian intrusion into the U.S. policy making process and demonstrates the manner in which the Kremlin does this. His analysis is convincing, clarifies the explicit nature of the Kremlin's actions and reveals a working methodology that [is] not apparent to the American public. The most effective manipulation of our politics is that which cannot be easily observed. . . . Putin's Propaganda Machine demonstrates that Russian interference in U.S. politics is a grim fact of our political life.--Selous Foundation

Marcel H. Van Herpen, Director of the Cicero Foundation, offers a very rich analysis of the tools of the propaganda offensive launched by the Kremlin after the intervention in Ukraine in 2014. Drawing on the experience gained during Soviet times, half-truths or truths out of context became the cornerstones of a massive disinformation campaign, which gained several supporters in Western countries. The author points out that Putin's propaganda offensive was not a mere emulation of the Soviet model. It also made use of four relevant developments: an unprecedentedly generous budget to be allocated to all actors involved in the campaign; the profound modernization of the media machine (which includes all media, not just newspapers); the growth of psychological know how; exploitation of the openness of Western media to convey its messages.--The International Spectator

Marcel Van Herpen has written a sobering book chronicling the exponential rise of Russia's soft-power capabilities which, he argues, are much more effective than old-fashioned Soviet propaganda techniques, and whose negative implications for Western democracy the Euro-Atlantic community has been too slow to comprehend.--Survival

The disinformation campaign that accompanied Russia's invasion of Ukraine was unprecedented in the post-Soviet era, provoking the US Department of State to assume the role of fact checker! Beginning with Moscow's 'soft power' campaign, which morphed into the Kremlin's 'information war, ' Van Herpen (director, Cicero Foundation, Maastricht and Paris) analyzes Russia's 'propaganda machine' in terms of its tools and methods, effectiveness, and limitations. Following a comprehensive account of the evolution of the Kremlin's use of domestic and foreign media, Van Herpen focuses on the role of the Russian Orthodox Church as a case study of Russia's 'secret weapon.' The last third of his book is an insightful analysis of the Kremlin's success, if not to entirely deceive, then to create confusion among Western countries generally but Germany in particular and France most recently. He concludes with an inventory of Kremlin successes and failures. Viewing the Russian propaganda machine as a crucial aspect of Moscow's 'reimperialization' of the post-Soviet space, Van Herpen argues that the West needs to stop tolerating Moscow's media presence. It should also make a greater effort to counter Russian propaganda. The book is strongly recommended to scholars as well as specialists on Russia and international affairs. Summing Up: Highly recommended. All readership levels except community college.--CHOICE

Van Herpen's work bursts outdated notions based on experiences with Soviet propaganda during the Cold War to show how a post-Soviet Russia under Vladimir Putin has learned to more deftly wield the tools of soft power, especially in shaping narratives and the international information space. An important and comprehensive study that anyone interested in Russia policy should consult.--Nikolas Gvosdev, The National Interest --Deze tekst verwijst naar de hardcover editie.

Marcel H. Van Herpen is director of the Cicero Foundation, a think tank based in Maastricht and Paris. He specializes in defense and security developments in Russia and the countries of the former Soviet Union. His books include Putinism: The Slow Rise of a Radical Right Regime in Russia and Putin's Wars: The Rise of Russia's New Imperialism. His personal website is http: //www.marcelhvanherpen.com. --Deze tekst verwijst naar de hardcover editie.
click to open popover

Jack Wilson
5,0 van 5 sterren Outstanding book. Author is an obvious subject matter expert ...
21 juni 2018 - Gepubliceerd op Amazon.com
Geverifieerde aankoop
Outstanding book. Author is an obvious subject matter expert on the former Soviet Union and the current Russian Federation and their subversion and influence operations. His research demonstrates that 'the Bear" never stopped running these operations after the fall of the USSR and they are only now coming to fruition. The same TTP's they were using in the Cold war are being utilized by Putin and his former KGB cronies to devastating effect to consolidate his position domestically, in the near abroad, and increasingly on the world stage. All accomplished under the protective "maskirovka" of a weakened and "friendly" capitalist state he has been able to subvert our leadership and policies even as he increased his own strength and capabilities. The author demonstrates that the U.S. belief that the Soviets were defeated in the Cold War and no longer a threat have allowed their espionage and influence agents to infiltrate our institutions of education, media, and government to an extent unheard of during the Cold War when we recognized them as the Main Enemy. Frightening stuff.
Meer lezen
Een iemand vond dit nuttig
Vertaal recensie in het Nederlands
Ga naar Amazon.com om alle 1 recensies te bekijken 5,0 van 5 sterren
Ontdek het beste van shopping en entertainment
Gratis en snelle bezorging van miljoenen producten, onbeperkt streamen van exclusieve series, films en meer
> Ontdek Prime
Terug naar boven
Over ons
Verkoop bij ons
Amazon-betaalmethoden
We helpen je graag
© 1996-2020, Amazon.com, Inc. en dochterondernemingen