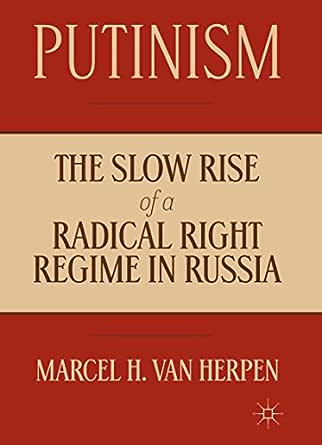 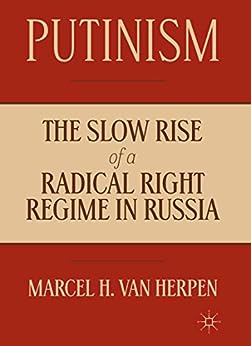 'A book which made quite a stir in academic circles.' Ukrainian Week

'This is a brief and incisive book, which helps you to understand the framework and methods behind Putin's Russia.' Goodreads

MARCEL H. VAN HERPEN is Director of the Cicero Foundation, an independent pro-EU think tank based in Paris and Maastricht. He is a regular collaborator with the US think tank The National Interest. His research interests include defence and security in Central and Eastern Europe. --Deze tekst verwijst naar de paperback editie.
click to open popover

Edward Brynes
5,0 van 5 sterren Where is Russia Headed?
5 februari 2017 - Gepubliceerd op Amazon.com
Geverifieerde aankoop
This book invites the reader to prognosticate the future political course of post-Soviet Russia.The author considers Weimar Germany and asks if Russia will evolve in the same direction. I think most readers, like me, will be allured. This "Weimar parallel" has been invoked ever since the demise of the Soviet Union, by people as varied as Richard Nixon and Niall Ferguson.

As most of us know, the Weimar period began with the drafting of a new German constitution in 1919 and ended in 1933 with the accession of Hitler. Post-Soviet Russia began in 1991 and continues to evolve under Putin. The initial conditions in Germany included the national humiliation of military defeat, economic collapse, and a sizable loss of territory. The nation was not only smaller, with fewer of its people within the new boundaries; it was also divided, with large numbers of former nationals in adjoining states. An initial sense of optimism (democracy-in-the making) existed in Weimar until 1930, but the last three Chancellors ruled mainly by decree. For Russia, initial conditions were similar. Since the accession of Putin Russia has become less democratic. The author describes a "downward sloping optimism curve", beginning in 1990 with feelings of doubt, then cautious optimism in 1994-1997, doubt beginning again in 1998, then outright pessimism from 2005 to the present. For Weimar, the downturn after relative optimism began in 1929. In both countries, the more recent downturn was associated with a declining economy.

In addition to pointing out the above geographical and demographic similarities, the author provides the criteria of economic development, politics, society, and social psychology. These are further divided into smaller components. For example, the criterion "economic development" is divided into inflation, general economic crisis, agricultural crisis, and simultaneity of problems. He then determines for each smaller component how the current Russian state of affairs compared with Weimar's. His conclusion is that Russia, like Weimar, is an authoritarian state but not fascist.

This technique of comparisons could be employed on any country in any time period, but it would not provide useful results except in determining the existence of a similarity with fascism based on the experience of Weimar. The author wants to detect not merely similarities but direction of historical movement toward or away from fascism in general. (Naturally he does not want to try to predict a Russian version of Hitler.) This means he must come up with a general conception of fascism. It would make no sense to assume that the only direction in which a country's fascism can evolve is specifically toward Nazi fascism. So after he has put Russia through the model, he provides two overviews of fascism, a "thick" model based on Max Weber's concept of an "ideal type", and a "thin" model based on a modified definition by Roger Griffin. Out of these he sets up his own general model. Then, considering the differences he has found between in each of the categories of the previous step, he then determines the most important of the differences between Russia and his general model and determines if there is a change toward the general model.

In this way he obtains a general evaluation of not just how close Russia is to fascism but also if it is moving toward fascism or away from it. The conclusion is that Russia is clearly moving in a repressive and possibly Stalinist direction. He also considers briefly two supposed alternative forms of "fascism lite", Berlusconism, and Bonapartism in Second Empire France. He even raises the question of whether fascism can be defined at all, although I agree with him that it can (reasonably well).

In the course of working out the parallel comparisons, the author explores a number of interesting developments in Russia. One of them is the search for a new national destiny. He observes "The Soviet Union was not a normal country...it was a beacon for mankind...With the sudden end of communism, ... Russia not only lost an empire and a specific form of political and economic organization, it lost also its myth....The role of a global technological leader seemed definitively to have been taken over by the United States." (p.81)

Three ideologues of Russian national destiny are mentioned: Igor Panarin, Alexander Dugin, and Vladimir Zhiranovsky. All three show an animus toward the US and not coincidentally envision a greatly expanded Russia stretching from Eastern Europe to the Bering Strait. Panarin sees Alaska returning to Russia while the US breaks up. California is transferred to China, Texas is returned to Mexico, and the East Coast is rejoined to Europe. He envisions Russia leading a Eurasian Union whose members will include the European Union and China. (This man is Dean of the Diplomatic Academy of the Russian Foreign Ministry, and is said to have Putin's ear). Alexander Dugin wants to reconstitute the Soviet empire with the addition of Manchuria, Xinjiang, Tibet, and Mongolia. Dugin's vision is based of the "heartland" geopolitical theory of H. J. Mackinder, which foresees a conflict between the greatest land power and the greatest sea power. Vladimir Zhirinovsky, leader of the Liberal Democrat party, is relatively moderate: he would have Russia reconquer the Soviet Union but acquire only Turkey and Aghanistan. Not much of the work of these writers is available in English, but there is an interesting book on Dugin, 'Black Wind, White Snow'.

This extremely interesting book is unfortunately sometimes confusing in its presentation of the model components and the parallel comparisons. I'm sure his method is valid and he provides safeguards against the possibility of looking at countries and societies in an over-subjective way. But it could be clearer and easier to understand.