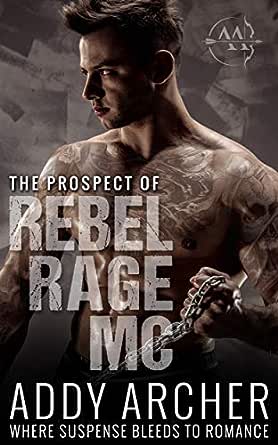 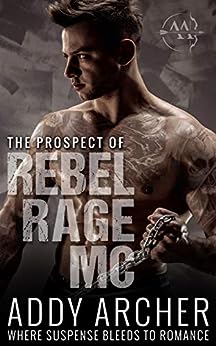 As a prospect of Rebel Rage MC, Linc’s assignment was simple: take care of the woman who was kidnapped. Easy… except for the riot of emotions she stirs within him.

Harper is broken and has the scars—inside and out—to prove it, but the love of a headstrong, protective biker might be just what she needs to heal.

While Linc and Harper dare to explore their developing feelings, danger lurks within the shadows, waiting to drag Harper back into the torment she barely survived the last time. Linc will risk it all to make sure that never happens, but will it be enough?

janine holland
4,0 van 5 sterren Sweet
7 november 2019
Indeling: Kindle-editieGeverifieerde aankoop
Its a funny and sweet story. Predictable as it is, nevertheless a good read.
A bit of sex, a bit of violence and all happy endings

The Prospect picked up right where The Vice President left off. As I’ve mentioned before, while each book focuses on a different couple, the trilogy follows a general storyline. So yes, books should be read in order.

Having gotten to know Linc a bit more during book 2 and seeing how protective he was over Harper, I was super, duper excited for his story. And let me tell you, I swooned HARD over his alpha side. Nothing would ever harm Harper again. Ever. He made damn sure of that. He loved that girl with every cell in his body and I loved reading about it.

After the horrible ordeal Harper had been through, Linc had become her lifeline. He helped her heal not just physically, but emotionally and mentally too. He was her everything and she was is, and I felt their connection and chemistry sizzle with each turn of the page.

As for all the action and drama, it was nice seeing things come full circle. And that epilogue?? I sure do hope there’s a spin-off planned, Ms. Archer!!! LOL!

Five stars!! Get this trilogy!!

marie preston
5,0 van 5 sterren All 3 r very good
6 december 2019 - Gepubliceerd op Amazon.com
Indeling: Kindle-editieGeverifieerde aankoop
This was the conclusion of story. All 3 are very good. You will love them, I did. I read all 3 in one day, cause I could not put them down. Is next generation next, I hope so.
Meer lezen
Vertaal recensie in het Nederlands

Jennifer Pierson: The Power of Three Readers
5,0 van 5 sterren #HOLYRAWANDGRITTYHELL
6 november 2019 - Gepubliceerd op Amazon.com
Indeling: Kindle-editie
The Prospect concludes the Of Rebel Rage MC trilogy, so while it's about 3 different couples, there's a continuous underlying story line of suspense which makes it impossible not to read the whole trilogy in order otherwise you miss out on a lot. So you MUST READ The President (Book 1) and The Vice President (Book 2) FIRST! Linc is the star of this story, and he's been in charge of watching Harper, the heroine with a very dark past, who is finally moving past some of it. And I don't want to sound trite about that, because Harper has been in previous books, so Addy Archer does write her story very realistically, as she does have PTSD from everything. They're catching feelings but there's still a villain out there that must be taken care of. And that villain provided the twists that had the f-bombs dropping. This trilogy is full of grit & raw, and Ms. Archer pulls no punches when writing about some of the things that have gone on, so be warned. So, if you want to know what happens, hit that one click button, and if you haven't started the trilogy, hit the one click button for those as well! HIGHLY HIGHLY HIGHLY RECOMMEND!
Meer lezen
Vertaal recensie in het Nederlands

Marie-NMST blog
3,0 van 5 sterren A quick read, but not everything I hoped for
7 november 2019 - Gepubliceerd op Amazon.com
Indeling: Kindle-editie
3.5 Stars

With all the action and suspense that build up from the previous, I was expecting an explosion of activity for Linc and Harper’s story. That’s not what happened.

The Prospect picks up right where The Vice President left off. While everything was tied up into a bow for Peyton and Hunt it felt like it had already been done for Harper and Linc as well. Harper’s already at a point where she’s nearly healed from everything she went through. Maybe a bit PTSD but she’s no where near as broken as she was.

I think it would have been better if this book started around the time Harper was picked up and Linc was taking care of her. This way we could have experienced the friendship/bond they built while she healed. As it was, there wasn’t enough substance between the characters for me to get or feel that connection.