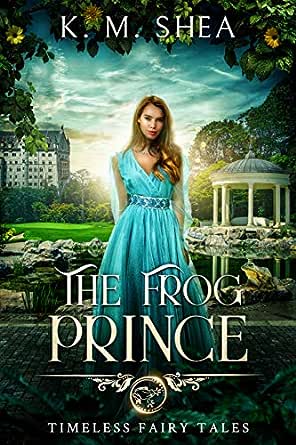 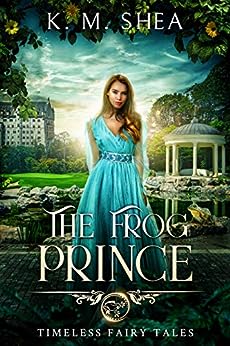 Crown Prince Lucien has spent his life pretending to be a flirtatious idiot in order to manipulate his courts and hide his deficiencies. His acting backfires, however, when his father orders an enchantress to turn him into a frog for his own safety after he narrowly escapes an assassination plot.

Servant. Capable. Expendable. Strong-willed Ariane is all of these things, which makes her the perfect escort for the newly transformed Frog-Prince Lucien. Carting the lazy prince around on a velvet cushion is the last thing Ariane wants to do when it seems like the dark magic that has been plaguing her world for years is winning. But when a pair of rogue mages attack Prince Lucien, Ariane realizes the threat of darkness is much closer than she thought.

Even worse, she finds herself drawn to the prince and noticing that perhaps he is not as foolish as he acts…

Can Ariane break the spell on Lucien's body and his heart and convince him to step into his role as the Crown Prince, or will the mages kill them both?

THE FROG PRINCE is a fairy tale retelling and the ninth book of the TIMELESS FAIRY TALES series. Filled with witty banter, fat frogs, and political intrigue, it can be enjoyed as an individual stand-alone book, but will be most enjoyable if read with other books from the series. If you enjoy tales of broom-wielding heroines, sweet romance, and magical adventures, download a sample or buy it today!
click to open popover

Jessie C
5,0 van 5 sterren A Classic With A Twist
5 november 2017 - Gepubliceerd op Amazon.com
Geverifieerde aankoop
I love the way that K.M. Shea takes a fairytale and makes it her own! In this case, Prince Lucien is turned into a frog after a failed assassination attempt. As a frog, he can be enchanted to be pretty indestructible. A maid, Arianne saved him, and is now watching over him as a frog. I loved this relationship! Lucien is a bit of a toad at first, and prince or not, Arianne is not afraid to tell him so. I also loved the way that Lucien’s sister-in-law, Elle, gave Arianne permission to throw frog Lucien or do whatever she wants if he is rude. He is indestructible after all.

While each of the books in the series can be read independently, this is the first time where I have felt like reading the rest of the series would be important. The countries have all gathered for a summit to discuss the magical attacks and what they can do to unite. There are many characters who overlap from previous books. We also get some new information about the big picture of who is behind these attacks.

I cannot wait for the next book!

If you like clever fairytales, I highly recommend this series.

Amazon Customer
5,0 van 5 sterren Indestructible Frog
7 november 2017 - Gepubliceerd op Amazon.com
Geverifieerde aankoop
I always love KM Shea's books. They are always the perfect blend of funny, some action, and a sweet story that are a great read for de-stressing after a long week. No, perhaps they are not that deep. They aren't meant to be. And that's exactly why I love them.

This book ties all the other books in the Timeless Fairy Tales and the prequel Snow Queen books together. I loved getting glimpses of past characters, and this book especially has a lot of Severin and Elle from Beauty and the Beast in it since the main guy is Prince Lucien, Severin's brother, and the book happens at Severin's chateau.

Things I especially liked:
- this book changed up the basic plot line of the Timeless Fairy Tales. Lucien doesn't end up a frog by an evil mages curse. Saying more than that would be a major spoiler, but I liked how his transformation came about.
- the way Lucien being an "indestructible frog"was used for comedic purposes all the time. So hilarious!
- Severin and Prince Freidrich's military bonding/friendship. Prince Friedrich was one of my favorite male characters from the series, so I was glad to see him get some screen time in this book
- the way Stil and Gemma played a role. They were also some of my favorite characters from past books.

I can't wait for the next books in this series! In many ways, this book changes everything, and I can't wait to see how the changes play out!
Meer lezen
3 mensen vonden dit nuttig
Vertaal recensie in het Nederlands

I really liked this new book, however, I do have a few issues with it. Thankfully the pros far outweigh the cons.
My biggest problem was some instances of info-dumping. This was very clearly a world-building book (I’ll get to that in a bit), and while it would be understandable for us to receive new information during a political summit, there were mentions of places, people, and events that just felt like background information being thrown around. I feel like the information drops could have been done a little more subtly. I also genuinely like Ariane and Lucien as characters, but I think that they fell in love a bit too quickly. Their romance doesn’t flow as smoothly as I would have liked it too. It was like it came out of nowhere.

Now, onto the good stuff.
This book was such a great addition to the series! I’ve been looking forward to reading about the events of the summit since the first mention of it way back when. I must have been buzzing with excitement most of the day before the release, and I wasn’t disappointed.
We’re finally fully introduced to the overarching plot the series has been hinting at, which was primarily what I was hoping for, as well as world building, and hey I got both (I’m not thrilled with the execution, but it still worked out fairly well). We were even introduced to some new characters, which was really interesting. I’d love to see stories told in the countries we haven’t gotten a good peek into yet, like Baris, Zancara, and Mullberg.
I love the idea of history repeating itself, and I can’t wait to see where K.M. takes us with that. Already we’re getting parallels to the Snow Queen stories, and as things continue to march toward the climax of the series, I’m sure we’re going to get a lot more. My biggest worry at this point is that things might be resolved too quickly, as the plot build up has been 9 books in the making, with even more to come.
The characterization was great. As I said earlier, I liked Ariane and Lucien, and I think that they made for a great play off of each other. Lucien is such a great character, and digging in and finding his hidden depths made for nice interactions between he and Ariane. I also think that Ariane is an adorable main lead, because of her background, she comes across as fairly timid, but has an underlying fire and spunk! She and Lucien truly do bring out the best in each other.
I was laughing all the way throughout while reading it. K.M. Shea has this way with humor that pulls me right in. The banter was wonderful, and seeing old and new characters interacting and playing around with each other was a delight.
Overall, I'd give it four out of five stars.
Meer lezen
2 mensen vonden dit nuttig
Vertaal recensie in het Nederlands

Megan Nichols
3,0 van 5 sterren Moves the Series Along....
3 november 2017 - Gepubliceerd op Amazon.com
Geverifieerde aankoop
I have read all the other books in the Timeless Fairy Tales Series and was rather underwhelmed by this book. I enjoyed that characters from the previous books were included, however they did not appear to fit cohesively into the story. Honestly, I can't imagine that with all of the characters' combined powers,
***Spoiler Alert***

Lucien's only option was to be turned into a frog and be guarded by a random maid.

I like that Lucien's character was fleshed out but he and Ariane just seem like repeats of previous characters and are rather forgettable. The Frog Prince is (finally) hinting towards a larger overarching finale and I hope that future stories feature a more diverse set of characters. Altogether this book moves the series along, but feels more like filler than a stand-alone book.
Meer lezen
3 mensen vonden dit nuttig
Vertaal recensie in het Nederlands
Ga naar Amazon.com om alle 163 recensies te bekijken 4,6 van 5 sterren
Terug naar boven
Over ons
Verkoop bij ons
We helpen je graag
© 1996-2020, Amazon.com, Inc. en dochterondernemingen