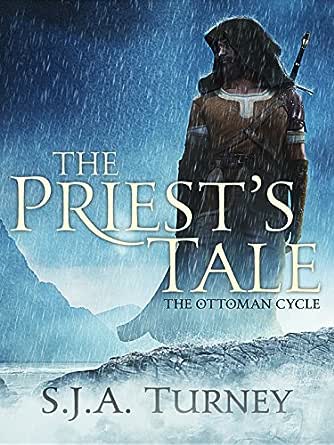 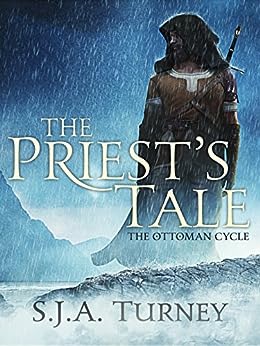 Blood and adventure on the Mediterranean battlefield.

Crete, 1492: After a sojourn on a Venetian-controlled island, Skiouros has learned everything he needs to know for his true quest: destroying the person responsible for his brother’s death.

Meanwhile, across the Mediterranean, a small fleet of Turkish galleys is engaged in a desperate last attempt to save Islamic influence on the Iberian Peninsula. While the great naval commander Kemal Reis battles to survive, his subordinate yearns to murder every hint of Christian life.

When Skiouros’ ship crosses paths with the violent would-be pirate, things turn sour. Tested to the limits of his endurance, with his life at stake, Skiouros must confront unpleasant truths about his past…

Robert Paterson
5,0 van 5 sterren How does Simon Turney do it?
14 oktober 2013 - Gepubliceerd op Amazon.com
Geverifieerde aankoop
SJAT is remarkably prolific - thank God - Good because I can be sure of reading 2 -3 new books from him a year. The Ottoman Cycle began as a one book idea but as SJAT got started he could see how this had legs and legs it has.

Here we move into the western Mediterranean and the world of the corsairs. It is a world hardly touched in fiction other that a past Master Rafael Sabatini whose classic in this setting is the Sea Hawk. SJAT is a Sabatini of our time. Well plotted, real characters that you like and get attached too - including the villains.

In this book, SJAT introduces us to a new character who at first we think may be a villain but who turns out to be to one of the good guys. With great skill the author reveals slowly why the hero and we might trust and love him.

The book itself is complete - I would advise reading the first first - and it sends us off into book three desperate to know what happens.

For while SJAT's plotting is great and so is the pace, I like his view of people and especially his view of what might be admirable in a man. This is consistent with his other books, namely his wonderful Roman Army series Marius Mules. I think this view of what is a good man is partly a self portrait. I say this not because I have met him but that he is a regular participant in the social media world and is great fun to follow. Over the years, I have found that the portrait of a person that we discover over time in social media is rarely wrong.

So if you want to read a good story with good people in it and would welcome entry into a world of such books then start reading SJAT's books.

You won't regret your choice

Don Sasser
4,0 van 5 sterren YOU HAVE TO START WITH THE FIRST ONE, THE THIEF'S TALE, AND THE PRIEST'S TALE PICKS THE ACTION RIGHT ON UP.
13 oktober 2017 - Gepubliceerd op Amazon.com
Geverifieerde aankoop
The whole Ottoman series is pretty good. The first one starts kind of slow but it builds the basis for the rest of the series and really takes off the last third of the book. The priest's tale was just plain fun to read. The reason I didn't give it five stars is it does get a little bogged down once again in describing the various ports of call the characters wind up in but there's plenty of action and an absolute GREAT villain. Don't wanna spoil it.
Meer lezen
Een iemand vond dit nuttig
Vertaal recensie in het Nederlands

James Dainis
5,0 van 5 sterren Another Action Packed Adventure
27 mei 2014 - Gepubliceerd op Amazon.com
Geverifieerde aankoop
In this second novel of the Ottoman Cycle, we find the former thief and street wise Skiouros in Crete preparing himself for the revenge that he seeks against the person whose scheme to over throw the Sultan of Istanbul led to the death of Skiouros's brother. With his dwindling funds he books passage to Rome but once at sea he soon runs afoul of Hassan Ecti, a radical Muslim pirate pro temp whose zealous mission in life is to destroy all Christians and any vestiges of Christianity.

The book seemed to start rather slowly with Skiouros studying and learning fencing. I was a bit disappointed that Skiouros was no longer the street wise character of the first novel. But, soon enough he and three new friends were up to their ears in a struggle for their lives against the crazed Hassan. It soon became a book that became harder and harder to put down. "How are they going to get out of this mess?" I would often wonder and had to resist the strong temptation to skip ahead a few pages to relieve the suspense.

Skiouros was a loner in Istanbul living by his wits. In this novel we find that he is now concerned not only about himself but also about his new friends. He himself has an internal struggle to come to grips with that. That was an interesting aspect to see and, of course, there is a lot of action and descriptions of life at sea, in Tunis and a few other countries and towns in the year 1492. I look forward to the next book in the series. It seems that our hero seeks refuge, as the story ends, on a ship called the Pinta that is sailing west. Pinta? 1492? Oh, oh.
Meer lezen
Vertaal recensie in het Nederlands

Definitive
5,0 van 5 sterren Excellent read!
22 mei 2018 - Gepubliceerd op Amazon.com
Geverifieerde aankoop
Very interesting. The Author has an excellent knowledge of Ottoman or Turkish History as it was during the period of the Ottoman or Turkish Empire.
The background of the primary Character who was able to escape from the Turks when they impressed young boys into Military Service - as well as the impressions of his older brother who chose to remain as a Turkish Janissary. I am not going to describe the actual book as I feel that the curious reader should make the most of the Author's ability to design a plot and remain with it throughout the book.
Meer lezen
Vertaal recensie in het Nederlands

Kindle Customer
5,0 van 5 sterren This is a four part book read.
22 februari 2019 - Gepubliceerd op Amazon.com
Geverifieerde aankoop
I enjoyed every one of the books because Skiouros as a young orphaned Thief in the first book The Thief's Tale. In each book he grows in physical strength and intellectual ability, learning new languages becoming more adept at his sword skills , thus able to protect himself more easily. He also has the soul of a good person. Finding it difficult to kill even in his own defense. He pulls to him friends who many actually die for him and to protect him. I'm in the last book The Pasha's Tale and there will be more growing in stature as a man to trust and honorable man. I would recommend this group of four wildly adventurous Tales.
Meer lezen
Vertaal recensie in het Nederlands
Ga naar Amazon.com om alle 27 recensies te bekijken 4,4 van 5 sterren
Terug naar boven
Over ons
Verkoop bij ons
We helpen je graag
© 1996-2020, Amazon.com, Inc. en dochterondernemingen