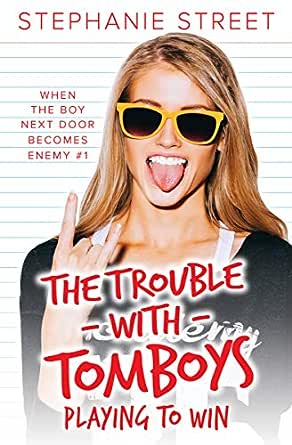 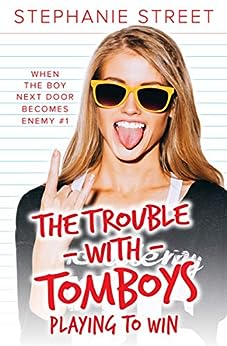 Playing to Win: A Sweet YA Hockey Romance (The Trouble with Tomboys Book2) (English Edition) Kindle-editie

Jordan
It didn't matter my new neighbor was hot enough to melt an ice rink. I had rules for a reason. And falling for him would break the biggest rule of all. Never date a teammate. And let's be honest. It's never been an issue.

Asher
Feisty. Fierce. Gorgeous. Jordan was all that and more. I never meant to tick her off that first day of school, but now she's all i can think about.

Too bad she hates my guts.

Can Asher change Jordan's mind about him and her rules? Find out in Playing to Win, Book 2 in the Trouble with Tomboys Series.

Read all the books in The Trouble with Tomboys series.
Playing the Enemy - by Maggie Dallen
Playing to Win - by Stephanie Street
Playing the Field - by Christina Benjamin

Kate McMurry
5,0 van 5 sterren Delightful, G-rated, YA, sports romance!
8 november 2019 - Gepubliceerd op Amazon.com
Geverifieerde aankoop
Jordan Parks is a talented hockey player who lives in Lakeview, a real-life suburb on the North Side of Chicago. Hockey is very big deal in that part of the country, and Jordan’s immediate and extended family are all hockey mad. Her father coaches a local boys’ hockey team for older teens, and Jordan and all three of her brothers have played hockey since they were five years old. Her 21-year-old brother Bobby currently plays minor league hockey, and her 19-year-old brother Joe is captain of their dad’s team. Her uncles and cousins all play hockey as well, and Jordan has an aunt who plays for the US National team. For the past 12 years Jordan has played on a girls’ hockey team but, for her senior year, she has won a place on her dad and brother Joe’s team. Her top priorities for this final year of high school are getting good grades and excelling at hockey in order to earn a scholarship to a university with a women’s hockey team. In order to catch the attention of college scouts, she needs to earn a position as a starter on the team. Jordan has never dated, doesn’t have time to date, and even if she wished to date—which she does not—she would never date a teammate. Not only would it be a massive distraction, it could potentially bring disrupting drama to her hockey team.

Asher Sloane’s father recently purchased a car dealership in Lakeview, causing Asher to have to move away from Minnesota for his senior year in high school. His father is a former college hockey star, whose NHL hopes were destroyed when he sustained a catastrophic knee injury during a car accident while still in college. He has always pushed Asher to shine at hockey, and over the years has signed up Asher for every kind of training imaginable for agility, strength and speed. All that training combined with a huge amount of natural talent, has turned Asher into every bit as much of a star hockey player as his dad used to be. But, unfortunately for his dad’s ambitions for his son, Asher’s passion is not hockey. It is music. More than anything he wants to be a singer/songwriter. He plays the guitar, sings, and writes both the lyrics and music for his own original songs.

To Jordan’s dismay, on her very first day of hockey practice, she learns that she and the new guy, Asher, will be competing for the same spot on the team. Worse, he is an extremely talented player who is much better than she is. Which means with him around, she may be riding the bench all season, with few opportunities to be spotted by scouts. Naturally enough, she greatly begrudges the fact that he stands between her and achieving her goals, but at the same time, she can’t help feeling strongly attracted to him. Asher is an extremely good-looking guy, and he doesn’t seem at all discouraged by the frosty reception she is giving to his consistently friendly overtures. In addition, she soon discovers that his family has moved into the house directly behind hers, and he is impossible to ignore. Every night he hangs out for hours in his back yard, easily seen and heard from her bedroom window, while he plays the guitar and sings lovely lyrics in a beautiful voice. Keeping a safely resentful distance from her hockey rival is proving to be a very tall order.

I am a major fan of young-adult sports romances in which the heroine is a talented athlete. It’s even more fun when she and the romantic hero are both skilled at her sport and play on the same team, as is the case with this book. Both Jordan and Asher are dynamic and sympathetic protagonists individually, and as a couple they are very well matched. Their verbal exchanges are lively and fun and, in spite of this being a G-rated romance, there is tons of sizzling chemistry between them.

I greatly appreciated the fact that Jordan has a wonderful family, rather than the cliché, YA, dysfunctional, ineffectual, or invisible parents and/or mean siblings. She is very close to her parents and brothers. Her dad is a great father, and her mother is affectionate and supportive as well. Her oldest brother Bobby lives in the same town as his family and rooms with her brother Joe, and Jordon frequently connects with them. Her younger brother Payton is twelve and is the source of a terrific subplot that involves Jordon, her whole family, and Asher.

I adore Asher. He is a wonderful guy with a good heart. In addition to the exciting interactions between him and Jordan, I loved the scenes with his infant half-brother and his mentor relationship with Payton.

I also enjoyed Jordan’s female friends. She has a long-distance relationship with two girls she met a few years before at a sports camp, who are the heroines of the two other books in this trilogy. Locally, Jordan has two other athletic girls as her closest friends. Kelly is on the swim team, and Natalie plays volleyball. Either of those two girls would, in their own right, make an excellent heroine of another YA sports romance.

Finally, I especially liked that fact that this author follows the classic, adult-romance structure for a romance novel, including: dual point-of-view of both Jordan and Asher, no cheating or romantic triangle, and a guaranteed HEA played out in a satisfying epilogue.

All in all, I enjoyed every part of this story, and this book is definitely a keeper for me. I highly recommend it for YA sports-romance fans of all ages.

I rate this book as follows:

Lexee Toste
4,0 van 5 sterren Great story!
9 januari 2020 - Gepubliceerd op Amazon.com
Geverifieerde aankoop
I really enjoyed this story! This series has been a fun read and they can all be read as stand alones. The girls are all tomboys and met at a sports camp years ago though they all live in different places and aren't close together. The characters are fantastic and I loved the byplay between the characters. This story pulled me in from beginning to end and I absolutely adored it! I would love to get more within this world and with the characters that we have been introduced to.
Meer lezen
Vertaal recensie in het Nederlands

Steve
5,0 van 5 sterren Cute and sweet
2 december 2019 - Gepubliceerd op Amazon.com
Geverifieerde aankoop
Jordon is a hockey playing girl. Jordon is sweet, smart, and 100% tomboy. Asher is new but also a hockey player, awesome, and a musician. This is how Jordon and Asher learn to compromise and get together. Well worth the effort. Highly recommended
Meer lezen
Vertaal recensie in het Nederlands

SB
5,0 van 5 sterren Noooo......
3 november 2019 - Gepubliceerd op Amazon.com
I need more of Asher and Jordan! Their story ended way too soon for me. Seriously. Can we make that happen?

Asher is adorable. He's a genuinely nice guy. Who also knows what he wants and will do what he must to get it. Transfering senior year may not have been ideal, but it seems to have worked out especially well for him!

Jordan... what can I say about Jordan. She does seem a little rough around the edges, but she is a sweetheart. (Although, the parking spot thing was a bit over the top for her. I was glad she worked that out.) While she was definitely tough, she still had her insecurities regarding boys and relationships.
I admired her drive. But also the way she eventually humbled herself over the starting position (though it still got to her some). It takes true character to see the situation for what it is and not lash out. Instead, she opted to work harder.

Their lives interconnected in such an intriguing and fun way. I loved it. I would absolutely read more about these guys (in case I hadn't made myself clear on that yet!)

Stock Phrase
3,0 van 5 sterren Better editing would have made this much more satisfying
5 november 2019 - Gepubliceerd op Amazon.com
I'm going to start with the negatives.
This is in need of better copy editing, because there are lots of mistakes that spellcheck wouldn't catch. Along with missing words, like "give a chance explain," there was also confusion with her writing "me" where she meant "mean," "nigh" for "night," "you're" for "your," etc. That's the editor's job, and it wasn't done competently.
Those mistakes got in the way of the storytelling.
Two of the characters, Kelly and Natalie, were problematic. The most awkward moment in the story was when Kelly goes off on Jordan for reacting to Kelly's own gossip. In addition to being unfair and mean-spirited, Kelly's rant is just too long. A friend would cut Jordan some slack; it's her first relationship ever. Natalie is there, since she called K over, but then she does and says nothing else of importance. That scene just wasn't thought through.
I liked the entire Parks family. We didn't ever see all of them together, but that's okay because we know how they all fit together.
Asher is too good to be true, but that's okay too; heroes are often that way.
Meer lezen
Vertaal recensie in het Nederlands
Ga naar Amazon.com om alle 20 recensies te bekijken 4,5 van 5 sterren
Terug naar boven
Over ons
Verkoop bij ons
We helpen je graag
© 1996-2020, Amazon.com, Inc. en dochterondernemingen