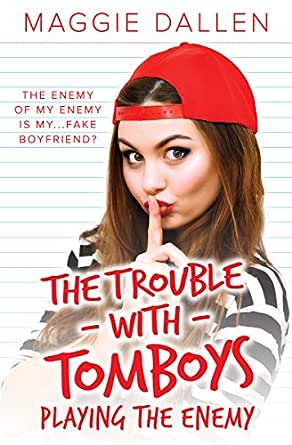 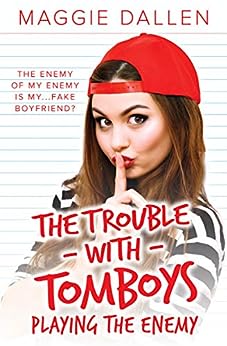 Hannah’s ex has some nerve. First he breaks up with her in a text, and now he thinks he can take soccer away from her? Think again. As the captain of their intramural team, her ex might be able to kick her off his team, but he can’t stop her from playing for their rivals.

The enemy of my enemy is my...fake boyfriend?

The fact that her new team captain is her ex’s arch nemesis? Even better. Playing for River’s team on the other side of town is the perfect payback. When her ex sees them together and gets the wrong idea... Well, what's the harm in playing along? Hannah's already learned her lesson about falling for a teammate and it's not a mistake she'll ever make again. Besides, her relationship with River is just for show—a way for them both to get vengeance on her ex. His kisses might muddle her mind, but he'll never steal her heart...right?

A sweet stand-alone high school sports romance.
Check out all the books in The Trouble with Tomboy series for the full reading experience.
Playing the Enemy – by Maggie Dallen
Playing to Win – by Stephanie Street
Playing the Field – by Christina Benjamin

Kindle Customer
3,0 van 5 sterren Typical YA romance.
24 oktober 2019 - Gepubliceerd op Amazon.com
Geverifieerde aankoop
I enjoyed it. Took about 4 hours to read and it didn't bore me. It had the normal YA teenage drama that you'd expect but it was still entertaining. Good enough to read once.
Meer lezen
Vertaal recensie in het Nederlands

Kate McMurry
5,0 van 5 sterren Delightful, G-rated, YA, sports romance
13 november 2019 - Gepubliceerd op Amazon.com
Hannah Crowley has lived in a small town in Upstate New York her whole life. For all of her school years, she has attended Lakeview Prep, a ritzy, private, K-12 school, with her next-door neighbor, and boyfriend of the past five years, Caleb Everette. She’d assumed that she and Caleb would be together forever, though their relationship was anything but romantically passionate. But that was just the way Hannah liked it. They were good friends who kissed occasionally and could count on each other as a reliable date for school dances. Then, out of the blue, the summer before their junior year, Caleb falls for another girl and callously dumps Hannah via text. And to add insult on top of injury, as captain of the Lakeview Prep intramural soccer team that they’ve both been part of since grade school, Caleb makes it humiliatingly clear to Hannah that because her presence on the team with him would upset his new girlfriend, he wants Hannah off the team.

Hannah feels almost as wounded by Caleb’s second betrayal as his first one. Her passion is basketball, and she is outstanding at it. But she is also very good at soccer, and even though she plays it mainly as a way of staying in shape and competitive during the basketball off-season, it is an exhilarating pastime for her. She is devastated to think she won’t be able to play soccer, until her best friend, Rose, reminds her that there is another possibility in town for her to play the game.

River Owens is a star soccer player who attends Fairmont, the local public high school, and is captain both of the school’s soccer team and Fairmont’s off-season, intramural soccer team. He and Caleb Everette are the same age and have been bitter rivals since elementary school, during both the regular soccer season and the off-season intramural league. River believes that if there is anyone standing in the way of his winning a full-ride, soccer scholarship to college, it’s Caleb. So it’s a big shock when Caleb’s lovely, long-time girlfriend, Hannah Crowley, asks to play on the Fairmont intramural soccer team. When they were little kids, and Caleb and River were still friends, Hannah had been River’s friend as well. But once she became Caleb’s girlfriend, around the same time that Caleb and River became enemies, Hannah has never talked to River since then. Until today.

It is obvious to Hannah when she shows up at the bedraggled Fairmont soccer field that River Owens is deeply suspicious of her. So she assures him, when he grills her as to her intentions, that she is not a spy for the Lakeview team, and she is no longer the girlfriend of his biggest enemy.

River’s team is desperate for a solid, female soccer player. Hannah is one of the best in town, and her offering to play for them is like the answer to a prayer. But more than that, she is the girl River has had a crush on for the past six years. And she is finally single.

I am a big fan of YA sports romances where the heroine is a talented athlete, and it is even more fun when the romantic hero is outstanding in the same sport as the heroine. Hannah and River are both highly sympathetic protagonists, and they are terrific together. Another big plus for me is that this book is written in the classic romance format: dual point of view of the hero and heroine, no cheating or romantic triangles, and a guaranteed, and believable, HEA.

The soccer scenes are very well done in this book. They are detailed enough to add excitement, but concise enough to avoid boring non-soccer fans. In addition, there are many fun and colorfully drawn subcharacters. In particular, Hannah’s nine-year-old brother, Bentley, is adorable and contributes a lot to the story. As do her friend Rose and her two long-distance girlfriends, who are fellow, skilled athletes, and who are the protagonists of the other two books in this trilogy.

Like all Ms. Dallen’s books, this one is G-rated. There is no cussing, drinking, smoking, drugs or sex. But even though there is no more than kissing between Hannah and River, these two vibrant, attractive protagonists have plenty of chemistry, and it was a great pleasure for me to experience their courtship.

I rate this book as follows:

Autism Mom
4,0 van 5 sterren -“Revenge.”- ⚽️ 🥅
16 oktober 2019 - Gepubliceerd op Amazon.com
Dumped by her long term boyfriend via text and kicked off the soccer team, Hannah doesn’t know which one hurts more. What better plan than to pretend to be in a relationship with his biggest rival?

At first, I found the beginning of the story to be very confusing and the prologue, as well as the camp friends, had me confused. There’s a bit of a disconnect there. But I think the intention was to introduce us to the characters who will eventually have their individual stories told throughout the series.

This is a cute, clean, teen romance with no swearing and no sex. 3.5 stars
Meer lezen
3 mensen vonden dit nuttig
Vertaal recensie in het Nederlands

Raquelqh
5,0 van 5 sterren Sweet read
16 oktober 2019 - Gepubliceerd op Amazon.com
Dumped by her long time boyfriend over a text and cut her from their team what’s a girl to do get even. Looking for a way to play the sport she loves Hannah goes to the rival team. River is the rival teams captain and isn’t sure if he should trust that Hannah is only looking to play and not spy for her boyfriend but when he realizes whats happened he jumps in with a plan to get back at his rival. But River doesn’t just want to get back at his rival he also had a big crush on Hannah when they were kids and he’s not the only one with a crush which makes things all the more complicated. River falls for Hannah all over again but isn’t looking for a relationship or so he believes and fights against. Will he come to his senses that there feelings are real and not a game. Sweet read would have like for River to not be so stubborn but makes up for it at the end! Definitely recommend reading can’t wait for more!