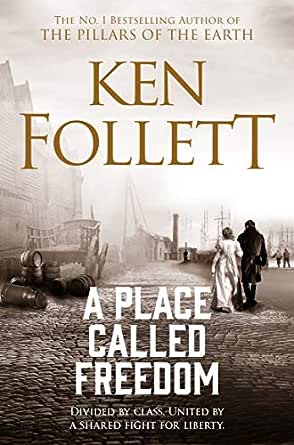 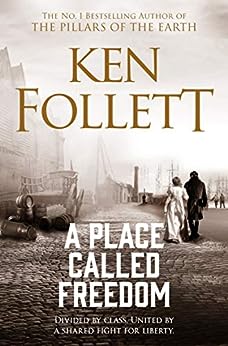 Set in an era of turbulent social changes, A Place Called Freedom is a magnificent novel from the undisputed master of suspense and drama, Ken Follett.

A Life of Poverty
Scotland, 1767. Mack McAsh is a slave by birth, destined for a cruel and harsh life as a miner. But as a man of principles and courage, he has the strength to stand up for what he believes in, only to be labelled as a rebel and enemy of the state.

A Life of Wealth
Life feels just as constrained for rebellious Lizzie Hallim, as she struggles with the less cruel circumstances of wealth and privilege. Fiercely independent, she is engaged to a man she doesn’t care for, a landlord’s son and heir to an exploitative business empire.

A Search for Freedom
Lizzie finds herself helping Mack after he becomes a fugitive. Separated by class but bound by their yearning for freedom, they escape to London. True freedom, though, lies further afield, in a new life that awaits across the Atlantic Ocean . . .

Harold Jones
4,0 van 5 sterren A Good Read
21 april 2017 - Gepubliceerd op Amazon.com
Geverifieerde aankoop
This book serves its purpose, fulfilling a search for historical adventure in Scotland, England and Colonial America. Along the way some detail is provided on coal mining, the coal distribution system, tobacco growing, and importantly, slavery -- among white people in Europe and America, and black people in America. All of this surrounds the story of an exceptional man who yearns for freedom from all the constraints and restrictions he was born into, and his pursuit of a woman he has known since childhood. It is an event-filled, adventuresome life, and a story well-told, and well worth reading by those who enjoy history and adventure.
Meer lezen
27 mensen vonden dit nuttig
Vertaal recensie in het Nederlands

Liz DiMenno
5,0 van 5 sterren Ken Follett surprises and delights again!
5 maart 2017 - Gepubliceerd op Amazon.com
Geverifieerde aankoop
Ken Follett never ceases to surprise me! I've read so many books about "freedom" and they end up being about slavery in America, African American slavery. I had no idea this book was about a different type of slavery altogether. It's still slavery, and horrific details, etc, but I was pleasantly surprised by his characters, plot twists, etc. When I finish one of his books (usually at 2 or 3 am because I can't put them down!) I always wish the characters were real people! I would love to meet these characters in real life. Thank you!
Meer lezen
28 mensen vonden dit nuttig
Vertaal recensie in het Nederlands

jenna4m
3,0 van 5 sterren Disappointing - not typical of this author
12 september 2018 - Gepubliceerd op Amazon.com
Geverifieerde aankoop
I am a huge fan of Ken Follett, having read Pillars of the Earth and several others. This is the first time I was disappointed. The book itself is fairly good, but in some places it seems to include unnecessary details. For example, there are several paragraphs about how some characters are moving through a wooded area, from one point to another, with no significant reason why we would need to know all this detail. I am used to his books being suspenseful, and there is a little of that, but I think he missed a few opportunities here. I am glad that this book is about half the length of this others, because I would have definitely abandoned it otherwise. I find it ironic that his 900+ page books (like the Kingsbridge series) never have any slow or dragging moments, but this shorter one sure did!

I strongly recommend this author - his 'long' books are amazing. Character development, especially how they overcome obstacles, is his specialty. Perhaps my expectations for World Without End were too high based on my knowledge of his other works.

INSTEAD of this book - read Pillars of the Earth, A Column of Fire and World Without End (Kingsbridge series). Don't be intimidated by the length of these books, they do not have any 'slow' moments. You will not be disappointed.

JStr8on
5,0 van 5 sterren Loved His Lizzie
10 november 2019 - Gepubliceerd op Amazon.com
Geverifieerde aankoop
A Place Called Freedom really personalized the beyond-our-imagination courage it took for the frontiers men and frontiers women who rode our country westbound and made it ultimately liveable and wonderful for the rest of us. Mr. Follett showed me one riveting set of characters and dire circumstances with accurate historical facts to have branded on me what it took for one European couple to immigrate here - yes...bravo immigrants...for we all are minus the Native American - and establish a home. Lizzie, a high born beauty, and Mack, an inspiringly honest and brave coal miner cross paths and ultimately find their way to America before the Revolution. The mining is depicted marvellously. The high born's entitlement as well. His fight for the right to be given honest money for an honest day's work and her right to be allowed to be independent as a women in a severely restrictive and oppressive male culture is an evolving sight to behold in this book. What fascinated me besides the varied and torturous circumstances which could bring anyone here to America - as slaves, as convicts, as those seeking property or religious freedom - was how much I just like who the author peopled this book with. Lizzie was as loveable as she could be a willful brat. Her essence beyond her independence was her open-mindedness. Mack's rebellious insistence on his freedom was often juxtaposed with an idealistic and honorable belief in right and wrong. And they both believed in the meaningful compact of precious, true and equal rights within the chalice of love and romance. Lastly, here's one nobody openly mentions but it always has a huge covert impact. Follett's depictions of sexuality was spot on, minus a lot of artifact and oh so loving. Thank you for that. That cemented my fiver on this book. Read it and weep. Read it and grimace. Read it and be overjoyed at the raw, strong and righteous personalities here. Just read it!!!
Meer lezen
2 mensen vonden dit nuttig
Vertaal recensie in het Nederlands
Ga naar Amazon.com om alle 1.014 recensies te bekijken 4,3 van 5 sterren
Terug naar boven
Over ons
Verkoop bij ons
We helpen je graag
© 1996-2020, Amazon.com, Inc. en dochterondernemingen